So, the Trump administration removes more than half the planned $300 billion in Chinese imports from the list of scheduled 10% tariffs that were set for implementation on Sept. 1. The intent? Make sure this estimated $156 billion in temporarily exempt goods are all targeted in a way that they're made up of toys, laptops, smartphones, video games and such. In other words, save the consumer. Save the holiday season.

Does this mean in any way that there is progress being made on either cross-border trade or currency exchange rates? Of course not. This is simply a short- to medium-term move to keep the U.S consumer in the game. The consumer has been the engine behind a U.S. GDP that continues to out-perform the rest of the developed world. Seems elementary to me that perhaps the administration is aware that, thanks to a strong labor market, there is a golden goose. You don't kill the golden goose.

That said, leaders of the world's two largest economies have agreed to continue the dialogue in two weeks and then again in September. What happens if the authoritarian regime in Beijing decides it has had enough of the pro-democracy protests in Hong Kong? What happens if the government feels compelled to crush the outcry? What if those protesters are waving American flags and singing our anthem? What if Tuesday's decision was just as much about protecting those people as anything else?

Apple pie or blueberry? Makes no difference. Think of a slice of pie alone on a plate. Firm crust, the slice holds its integrity. Delish.

Ever have pie where the crust is comprised of that crumble stuff? Kind of turns into a sloppy mess when the hungry diner gets down to business. The global economy right now is sort of like that slice of pie with the crumble crust. It's falling apart.

Tuesday, bloody Tuesday... Ever hear of ZEW? Of course you have. The reason being that for most, using the full name "Zentrum fur Europaische Wirtschaftsforschung" just doesn't roll off the tongue. Well, ZEW runs a survey in Europe measuring economic sentiment. Its August release made news on Tuesday morning. You guessed it: Sentiment in Germany specifically, and also more broadly across the Eurozone, is now at levels much worse than anticipated.

Tuesday night in New York, Wednesday morning in Beijing... China's National Bureau of Statistics had some numbers to publish. Would they ever. It would appear that for China, Fixed Asset Investment, Industrial Production, and Retail Sales all missed their marks for July;. Industrial Production and Retail Sales both missed very badly. Europe? Oh, just the German economy also printing in contraction. Now, both Germany and the U.K. are half way to a textbook recession. Oh, the U.K. also showed consumer-level inflation for July growing more than expected year over year. What does Bank of England Governor Mark Carney do if the economy is contracting, but inflation is growing? What else could possibly go wrong?

Obviously, the major U.S. equity indices reacted quite well to the administration's slower approach to implementing tariffs that would damage retail sales in the short term. Remember what I told you 24 hours ago about declining trading volumes and the possibility that the "little guy" had been picked off yet again? (They were.) On Tuesday, these markets were led higher by technology and discretionary shares. In other words, the groups most directly impacted. Energy, industrials and materials all were higher in a good tape, but under-performed the broader market. These are all groups highly reliant upon the prospects for economic growth. Now, take a look at the S&P 500. 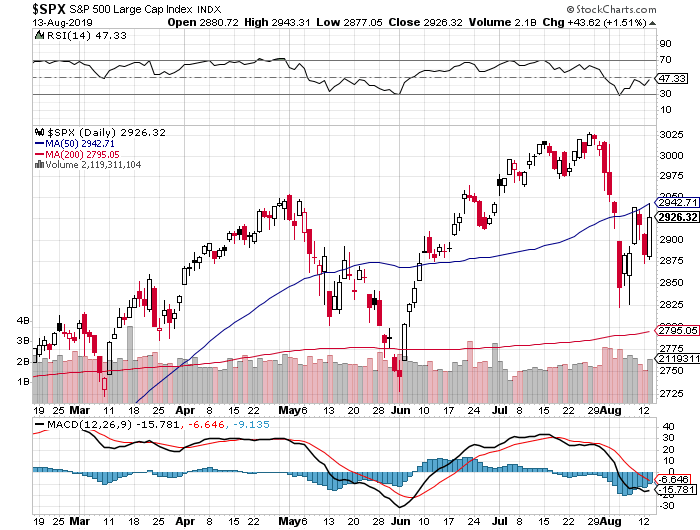 What do you see? Higher volume? Check. Does that mean greater fund participation? It does. Up volume beat down volume by nearly 3 to 1 at the New York Stock Exchange and by 2 to 1 at the Nasdaq. Given that the S&P 500 ran 1.5% on the day and the Nasdaq Composite ran 1.9%, this would normally tell me that a short-term bottom has likely been put in. Just one more thing....

How about that 50-day simple moving average (SMA)? Stiff resistance. Again. Third day in the last four that the S&P 500 (and Nasdaq Composite) have been stopped right there. Dead in their tracks. What does that say? What does the fox say? The answer may lie in the bond market. Still.

Remember him? The former political adviser to President Bill Clinton once said when discussing reincarnation, "I would like to come back as the bond market. You can intimidate everybody." He may or may not have known just how prophetic that was.

We already know that about 25% of all the global debt issued by sovereigns and corporations now trades at negative yields. We all know that the oddity of negative interest rates first surfaced in Japanese money markets many years ago. Ahh, the lost decade. We had our own lost decade from 2007 to 2017. How nice. Since then, Sweden, Switzerland, Denmark and the entire eurozone have eagerly scampered down the rabbit hole. Don't forget, the European Central Bank (ECB) is expected to next push on that string in less than a month (Sept.12). That should solve everything (sarcasm for the new kids).

You may notice that along with the Tuesday under-performance of sectors within U.S. equity markets was a near-lack of movement in U.S. Treasury securities markets as well. If there was belief that anything had been accomplished on Tuesday, other than keeping the U.S. consumer in the ballpark, yields would have reflected a risk profile more open to the idea that the economy could grow. So it stands very early on Wednesday morning that the U.S. 10-year note yields less than one basis point more than the U.S. two-year. This ain't kids' stuff. The 90-day/10-year yield spread went over the cliff big-time in late July.

Extreme damage has been done to the two-year/10-year just since Friday. You have to see this to believe this. Reading newspaper articles does not illustrate for the mind the danger this spread is in.

Do we go into economic contraction the very second that the two-year/10-year confirms the three-month/10-year? Of course not, Typically the economy has had 18 to 24 months after such a signal before actual recession. That said, markets have never before been this automated as these events unfolded in real time. Things happen faster now, and when this spread inverts (could be today), I shudder at the thought of what the algos that now control the point of sale will do to the marketplace.

Remember, there's nobody left to use their heads in these situations. I warned against decentralizing the point of sale while automating the auction market. Now speed is prioritized over price. The retirees and tuition payers of the nation thank you. Micro-second execution is far more important to them than price discovery (more sarcasm). You will reap what you sow.

This will ultimately create opportunity after the fear I warned about on Tuesday permeates the market. The German 10-year yields -0.63% here on Wednesday morning. The U.S. 10-year currently gives up 1.63%. That spread of 226 basis points between the two is lower than the 233-ish to 240-ish range that we are used to. That means one of two possibilities is true.

One: U.S. Treasury securities are short-term overbought, or

Two: Somebody's about to get hit in the teeth.

Will you be brave? You may have to be. TINA will show up. When? Wish I knew. I was a net seller on Tuesday when I would have in the past been a net buyer given the technical signals emitted by equity markets. I do not know if that was the right move. I do know that the pop offered increased value in exchange for decreased risk. I exited nothing in entirety, but I gave a few open positions a clean shave and a nice haircut. James Carville? Yeah, that guy.

Run for the Border

Apple Inc. (AAPL) made a run for the border on Tuesday. The tariff-related news was very good for shareholders of Apple, which is a holding of Jim Cramer's Action Alerts PLUS charitable trust. Apple is one of the names I really like moving forward based on the firm's transitioning business model... even better now that tariffs won't put the whammy on iPhone demand this holiday season. I will remain long this name. Yet, this is one of the positions that your author gave a haircut on Tuesday. Why would I do such a thing? Let me show you.

Remember that crucial $215 level that in showed you ahead of earnings? 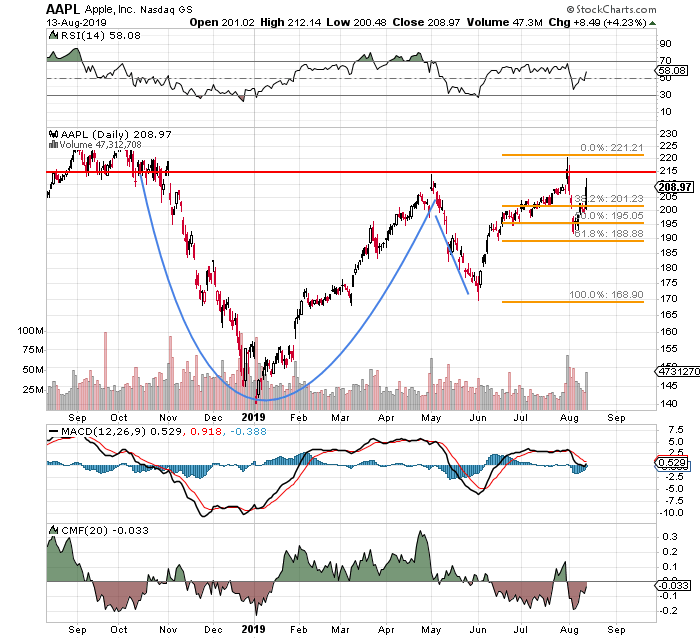 Yup, the shares failed to close to the same spot again. I have large profits to protect in this name, and I fall in love with no stock. The shares may rise to make another attempt at $221 before the holidays. I hope they do. That said, my intention will be to add the shares sold Tuesday back on, when the algos take their pound of flesh. Perhaps $201. Perhaps cheaper. We don't know. When we don't know, we protect.

Get an email alert each time I write an article for Real Money. Click the "+Follow" next to my byline to this article.
TAGS: Investing | Stocks | Treasury Bonds | Consumer | Digital Entertainment | Technology | Real Money