Equity markets were higher on the day on Thursday, appearing to build off of Wednesday's positive action, though we all understood that trading volumes had sent signals all week that had told us not to trust what we were seeing in front of us, be it good or bad. About half way through Thursday's regular trading session, the complexion of what we saw before us took a serious turn for the worse. What had been a rally became an "unchanged," for the most part.

The Financial Times reported that remdesivir, the Gilead Sciences (GILD) candidate for therapeutic treatment of Covid-19 had apparently not done well in a randomized, clinical trial in China. That stock sold off fairly hard, followed by broader equity markets in general. Why that would be is no mystery. Any hope for an earlier, more robust economic reopening of the U.S. economy will be reliant itself upon the comfort level of those participating (or choosing not to participate) in said economy. This comfort level, short of full development of a vaccine believed to be both safe and effective, can only come from a belief that this illness is treatable once one becomes ill. If remdesivir, first developed for use against Ebola with less than stellar results, is not the leading candidate to become such a treatment, it is probably the most high-profile.

What does Thursday tell us? Not so much, actually. Sure, trading volume was indeed elevated at both of New York's primary exchanges on Thursday from Wednesday, but all three of our most highly watched large-cap indices closed within a smidge of their closing prices on Wednesday. The question would be ... does the increase in volume actually signal direction? In my opinion, it does not. Winners beat losers at both exchanges, while advancing volume trounced declining volume by a wide margin at both exchanges as well. There is no signal here.

What I do see as perhaps a warning is the behavior of the S&P 500 around its own 50-day simple moving average of 2018. As readers will see, the index traded above that level on Thursday and then failed to hold the spot as has happened regularly since late last week. 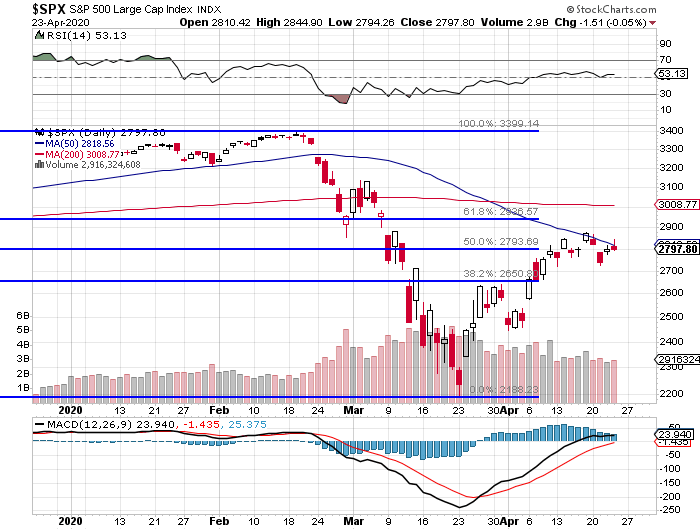 Technically, this becomes the spot to watch for the broader market. Secondarily -- but as far as market leadership is concerned, still very important -- would be the performance of the Nasdaq Composite around the 200-day SMA of 8411 for that index. 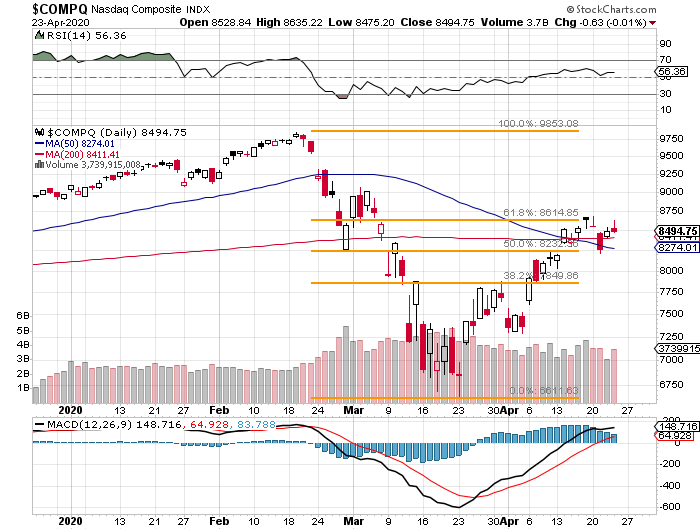 As readers will see, that particular line has been taken and held. For now. Overnight, the action in Europe has been soft, as has been the underlying macroeconomic data. This weakness had extended itself across the Atlantic as overnight equity index futures here in the U.S. were acting weak, but in truth have been on both sides of flat through the wee hours. Any signs of weakness around the 200-day line for the Nasdaq Composite would not cause, but would rather be symptomatic of underperformance across semiconductors, software and biotechs.

Too Little, Too Late?

Overwhelming bipartisan support. How I have waited to write something like that. A bill that enables $484 billion in additional funding in the national fight against Covid-19, heads to the desk of the president, after passing in the U.S. Senate, and then winning 388 yeas versus just five nays in the House of Representatives.

As part of this bill, an additional $320 billion will be allocated to the Paycheck Protection Program that was meant to aid small businesses in an effort to maintain payrolls through this public health / economic crisis. More than 26 million initial jobless claims later and knowing that probably enough individuals are still trying to file for benefits, not to mention funds that went where they probably should not have as part of the initial round of PPP, the expectation is still that this additional money will move quickly. Perhaps if this program had been sized out to $1 trillion in the first place, there could have been a less disastrous outcome for Main Street, USA. Then again, I am just a man, and that is just conjecture.

Just as important as the attempt to support small business employment will the $75 billion additional funds that will be used to support hospitals and health care systems that in many cases have become overwhelmed and have had to forego certain non-essential elective procedures, which is where much of their broader funding actually comes from.

Then there is the $25 billion slice of pie that will be used to improve and support testing for this coronavirus at the state and local levels. That, my friends, along with the testing for antibodies is where the battle for saving the U.S. economy will be won or lost, until an effective treatment or in a wonderful world, a successful and safe vaccine is not only recognized, but mass produced at incredible scale.

Oh, and it is a problem. The U.S., prior to this pandemic, was a service sector economy, driven more than two-thirds by consumer activity. The industrial base, foolishly scoffed at by economists who really just did not understand, had been allowed to fall to as little as 12% to 13% of GDP. Suddenly, the U.S. finds itself in a position where industries that require elevated levels of human contact are where the money is/was. Just thinking of what the state of Georgia is doing. Massage parlors, tattoo studios, nail salons, barber shops. I mean, are we out of our minds here?

Outdoor construction in a warm weather state? Okay, I see there's a case for that. Even work on assembly lines or in these meat packing plants that are now having problems... those elbow to elbow working conditions can be remedied. I think. That industrial base can probably go to work a little more safely than can those who work "hands on" literally with the public.

New construction can be part of the answer. Food production has to be. Haircut? I'm a grown man. This I can do myself. Tattoos? Yeah, I have one that could be improved on. Not running out the day/week/month/year that tattoo parlors reopen. Massage parlor? Nail salon? My wife has not asked, but if need be, I'll learn how.

Why do you think the Chinese economy seems to be rebounding? Large industrial base. Less reliance upon consumers. That makes sense. Then again, who can trust any data released by that government? Even those few economists who once did have learned that lesson. The hard way.

On Thursday, as you well know by now, the Financial Times reported that Gilead's unapproved, investigational product known as Remdesivir which is now engaged in multiple Phase 3 clinical trials had "flopped" (their words) in a trial that had been terminated due to low enrolment in China. FT cited information from a draft report that the WHO (World Health Organization) had it seems, published by accident, and then removed. What the report had said was that the candidate for treatment did not improve the condition of the patients involved nor did it decrease the level of this virus present in their bloodstreams. In addition, there were apparently significant side effects and several patients had to be taken off of the medication.

I am long this stock, just to be up front about it. I will certainly try to not show bias. Of course, the hope is that this treatment or any treatment that gets into the later stages of clinical trials will show enough promise as to improve both the human health condition, as well as to allow for a more normalized level of personal interaction. Taken from a written statement, Gilead Chief Medical Officer Merdad Parsey said "We believe the post included inappropriate characterization of the study." Parsey adds "The study was terminated early due to low enrolment and, as a result, it was underpowered to enable statistically meaningful conclusions."

It is probably key to note that these results also contrast with those produced by a study at the University of Chicago last week that were reported by Stat News. That study, though not including a comparison to a a placebo group, was believed to have shown promise.

The deal is this. Gilead is running two studies of their own, and the firm has been quite conservative in any public response whether news broke one way or the other. These are Phase 3 tests where the aim is not just the revelation of possible efficacy, but for whom and when in the illness, the treatment might prove more or less beneficial. Gliead expects to have results from these studies later this month for patients with severe cases, and for those with moderate cases sometime in May.

You kids all know that the Fed will hold a regularly scheduled policy meeting next week, right? Well, I don't think they'll be lowering rates, or messing much with the already underway programs of bond purchases. Where do we go from here? As the national economy remains shuttered, as national and state tax receipts remain delayed, which punches even larger holes in public budgets than had become routine, there probably can only be two ways that the central bank goes in its statement.

First, the management of, and second, the probable expansion of already existing programs. I would think there is little doubt that demand for the Municipal Lending Facility that right now only includes all 50 states, the District of Columbia, and 25 counties or cities based on population minimums. Smaller municipalities will almost certainly have to be added to eligibility.

In addition, the Main Street Lending Program, not to be confused with the SBA's PPP will likely have to grow from its current size of $600 billion in order to include all of those entities that fall in between what is a small business, and what is large business. As roughly one in seven U.S. laborers has filed for unemployment benefits over a five-week timeline, I would think only more aggression will be shown moving forward by the nation's policy makers.

As for any financial aid meant for state budgets that have now blown up way beyond anything imagined, this will be a fiscal fight, and this, we now see, will be partisan. Stay tuned.

Intel (INTC) : good or bad? More like good, then bad. The semis is where I think early leadership comes from on Friday morning. We'll see.

Get an email alert each time I write an article for Real Money. Click the "+Follow" next to my byline to this article.
TAGS: Drug Approvals | Earnings | Economy | Investing | Markets | Politics | Stocks | Trading | U.S. Equity | Coronavirus