I would like to begin with yet another discussion on breadth. You see, Monday's breadth was pretty lackluster. With the S&P 500 adding 30 points and breadth on the New York Stock Exchange at positive 480, it was nothing to write home about. Yet we now have eight of the last nine trading days with positive breadth. And that is something to note on the positive side, because that doesn't happen very often.

My Overbought/Oversold Oscillator is based on the breadth of the market. Recall, just before Christmas, when everyone was down in the dumps and so sad we were not getting a Santa Rally -- even though technically he is not supposed to arrive until Christmas, not before. At that time, I showed you how we had this long string of negative (red) breadth readings we were dropping (off the 10-day moving average, which is the input for the Oscillator).

Well with eight of the last nine days of positive breadth, it is now the exact inverse of that as beginning Wednesday this week we will drop a long string of positive readings. And that is what will make this market short-term overbought midweek.

Before everyone gets bearish, let's remember that the input for the McClellan Summation Index is breadth and when this indicator is rising the majority of stocks are rising. That means all these positive breadth days has lifted this up and given it a cushion to work with. For now we'll get short-term overbought with this indicator still rising. Until the Summation Index rolls over again, the market gets the benefit of the doubt.

Now let's talk about sentiment, which was still relatively sad late last week, but seems to be shifting rapidly. The Daily Sentiment Index (DSI) for the S&P had reached 88 on Monday Dec. 27, and we then saw the S&P have a few rocky/pullback days. It now stands at 79, which I would consider the high end of neutral. Should it get up and over 85, then I would think the runway is short for the rally.

More interesting on the DSI front is the reading for the VIX, which is now at 19. If this indicator heads toward the single digits it would be a sure sign that volatility was coming our way.

Keep all of this in mind, as you view the chart of the 10-day moving average of the put/call ratio. It was at 1.0 just before the market made its low before Christmas and is now at .82. Should it fall under .80 and get closer to the mid-70s, that would be a signal that sentiment has gotten too bullish. 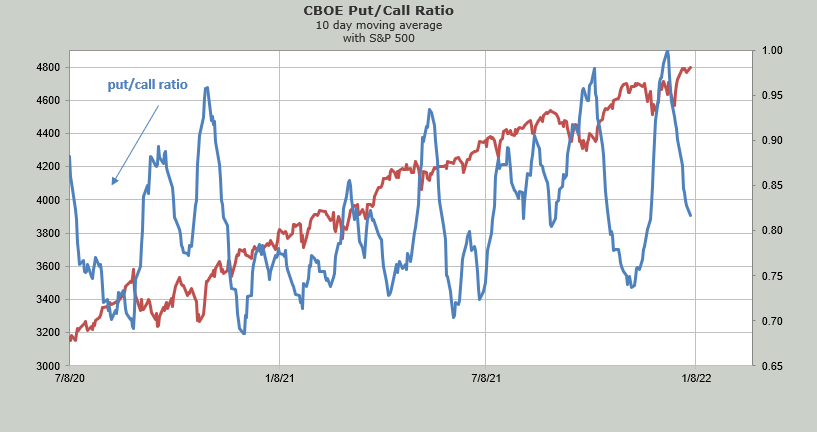 I expect we'll get overbought by Wednesday, but unless the breadth gets significantly worse, it should just be a loss of upside momentum, meaning a pullback or a chopfest. If breadth turns sour, then the overbought reading matters more.