Said the little lamb to the shepherd boy

Do you hear what I hear

(Do you hear what I hear)

Ringing through the sky shepherd boy

Do you hear what I hear

(Do you hear what I hear)

A song, a song

High above the trees

With a voice as big as the sea

With a voice as big as the sea

-- excerpted from "Do You Hear What I Wear?"

Congratulations, you've made it. I know that the next few sentences will bore the veteran traders out there, but this does need to be repeated often for both the novice traders that have entered our ranks, as well as for those who probably do something else occupationally, but prefer to manage either part or all of their wealth themselves: Any potential "Santa Claus Rally" begins today.

What? I know. Every time equity markets trend higher from early November on into the New Year, much of the financial media refers to the entire ball of wax as a Santa Claus Rally. Truth is that the famed rally, named after Ole Saint Nick, is quite specific in what it encompasses. Anyone who has spent any part of their professional life trading equities understands this. Yet, so many of those who cover what we do for a living appear not to (Some surely do, and do explain on air. I am not referring to them. Hi Liz, Hello Dom).

For the purpose of educating the new kids, I will explain the phenomenon exactly the way it was explained to me back in the early 1980s by the greatest floor trader I ever knew (Hi Howie). I will do so again next year as well, should the Almighty grant me another 365 days. The famed Santa Claus Rally only includes a period of seven trading days, the last five days of the outgoing year plus the first two days of the incoming year. As trading volumes can be light and then very heavy on certain days this time of year, trading a small (for me) diversified basket of securities earmarked solely for this period does tend to work out. We don't bet the farm on this.

That would be because there are no guarantees. Betting on this seven-day period, I was told as a young man, tends to return a positive result 75% to 80% of the time. I have found that to be accurate over the decades. There is, in my opinion, almost no normal year, and one can get shaken out midway through the period as individual days can be quite volatile. A 1% return over the seven days would be close to average. I have also found that a strong Santa Claus Rally or lack thereof, will have almost no impact on the month of January that follows.

That said, the period is more than an old wives' tale, but not bankable, nor will it make you rich. What it is, I think, is a fun little way to try to turn over a few bucks during the holiday period, with something of a historical track record. That is all.

Wednesday was quite the interesting session. Equity markets appeared to be rather strong for most of the day, then much of that rally melted away over just the last 15 to 20 minutes of the session. This makes the determination of professional intent through levels of conviction based upon accumulation / distribution a little difficult. For instance, by day's end, it was clear that small-to mid-caps were indeed the base of ths rally, while the S&P 500, our broadest large cap index, closed very close to unchanged. Energy led the way, as Financial stocks also showed some pop. By the way, Banks led the Financials, and Wells Fargo (WFC) led the large banks.

That makes some sense given that yield spreads between what longer-dated Treasury securities pay and what short-term Treasuries pay expanded. Notice not just the upward curl this week for the 10-year/3-month yield spread, but the trend of this most focused upon of all spreads as well.

What this displays is that this spread now hits support at close to 90 basis points. New kids. remember, yields are simply what Treasury securities (or any debt security) pays -- yields and interest rates are kin. They are also inverse to prices. What this spread tells you is that the U.S. 10-year note is probably finding regular support at close to the same spot on a regular basis, given that we know that the Fed has basically pinned short-term rates in place. 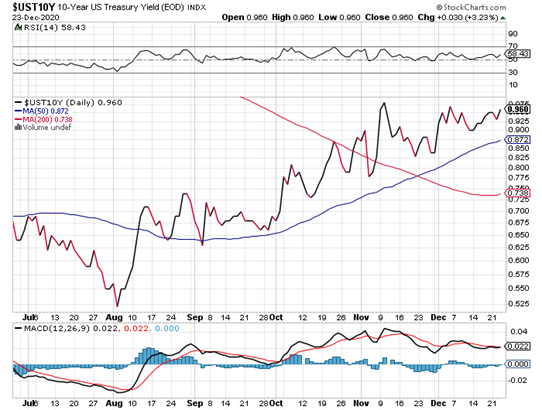 What readers, especially the newer ones should note here is that this is precisely the case. The 10-year note since early November has been unable to yield more than anything in the mid-to high 90's in terms of basis points.

Why this matters? Because higher interest rates, while feared by many, can also foretell in a free market system a period of either rising inflation, accelerating economic growth or both. Of course, by virtue of necessity, the central bank has had to purchase Treasuries at artificial prices throughout the pandemic (as well as in response to the Great Financial Crisis) in order to enable the federal government, as well as to artificially support the entire economy.

Is this a negative? Certainly, in theory every sentient being would prefer free-market pricing for all goods and services to include borrowed capital. That said, there is also something very negative about mass poverty, and broad desolation, so I don't see that the U.S. Treasury and Federal Reserve Bank have much choice but to extend this debt-fueled super-cycle as far as it will go.

The Information Technology sector finished Wednesday in 10th place of 11. Once again, Renewable Energy (in the Tech sector, not in energy) lit the way. FuelCell Energy (FCEL) and Plug Power (PLUG) are simply beasts right now. However, this is a smallish industry in comparison to its peers, and the entire group was weighed down by Software, the Semiconductors, and Hardware industries. This forced, among all of our most closely followed equity indices, the Nasdaq Composite and Nasdaq 100 down into the red for the day.

The interesting takeaway here was the breadth displayed on Wednesday. Exceedingly positive at the Nasdaq Market Site. Up at Times Square, winners beat losers by almost two to one. Advancing volume absolutely crushed declining volume (4 to 1) on significantly higher aggregate trading volume. What does that mean? It simply means that there was very close to zero conviction in that late selloff that hit the Nasdaq-based indices. Traders (algos) took profits as investors took an eggnog break. I, as an individual who has traded these markets for several decades, am telling you that I see nothing of concern in what happened at the Nasdaq over the final 20 minutes of trading on Wednesday. Breadth was bullish in complexion.

Now, down at the NYSE, there is some cause for concern. This is where many stocks reside that do less well during pandemic-based shutdowns, and really need the support of a large fiscal support bill/law. At the NYSE, winners did beat losers by more than two to one. Advancing volume also crushed declining volume (more than three to one), but -- and this is a big but -- aggregate trading volume ebbed quite significantly from Tuesday.

Cause for concern? How does "maybe" sound? That means I don't know, but it could be. I am not going to lie to you and try to sound sure of myself on that point, but this is going to swim around in the back of my head until I see how markets open today.

There are no significant domestic macroeconomic data scheduled for release today. Of course, this happens only because of the ridiculous volumes of data that "they" dumped on you on Wednesday. Of course, the positive focus would be on November Durable Goods Orders, which showed growth, but not quite enough growth in core capital goods, which we use as a proxy for business investment. Orders for defense aircraft soared 15.7%. Excluding defense and all aircraft, which is how we determine the core, the growth is shaved down to 0.4% month over month. Still growth, but slowing.

That was the good news. Personal Income fell off of a cliff (-1.1%) in November from an October that was -0.6% from September. Concerned? You should be. Personal Income has now contracted in three of the past four months and in five of the past seven, and the pace of this contraction is accelerating. This forced November Personal Spending into contraction for the first time since the pandemic was new, ending a six month period of growth.

Perhaps the real shot across the bow came from November New Home Sales, which missed the consensus view by a country mile, printing at its weakest level since June. You'll recall that November Existing Home Sales also showed contraction when that number hit the tape on Tuesday.

Has housing peaked? We do have to ask that question. Both the Conference Board and the University of Michigan have told us this week that the consumer is losing confidence. Housing has been the strength of this economic rebound. One might think a pause would be necessary until consumer sentiment/confidence recovers. When does that happen? When fear of viral infection no longer suppresses the business cycle, a cycle whose key output would be demand for labor.

Tough year. Tough season. Oh, trading has been good. You all know that's not the problem.

To all those reading this who share my faith, I wish you a very Merry Christmas. To all those who do not, I hope you either had (I know Hanukkah ended last Friday) or have a very nice holiday. To those kicking off the Kwanzaa season on Saturday, I wish you one filled with a sense of community in this most difficult of years to feel just that.

This will be the holiday of Zoom Video (ZM) and mass text messaging. Despite the seemingly overwhelming difficulty of not being able to responsibly visit with family who we miss, we must remember that not only do we have family, but we are family.

Check the guy on your left. Check the gal on your right. Check the house across the street. They may need something that you can provide. So many homes on my block are currently stricken with this darned virus right now that finding someone who needs an emotional lift should not be hard.

All we are, we are

We are all, all we need

Get an email alert each time I write an article for Real Money. Click the "+Follow" next to my byline to this article.
TAGS: Economic Data | Federal Reserve | Futures | Investing | Markets | Stocks | Trading | Treasury Bonds | Coronavirus

Two potential top reversal patterns on the weekly chart give us pause when it comes to buying the aggregates supplier's shares now.

Here's Why Qurate Is a First-Rate Investment

QRTEA has blowout earnings and cheap valuation. What's not to love?

Indices Are Catching Their Breath But Watch for Strong Support

Action like we had on Monday helps create a large supply of buyers looking for entry points.