While the folks in the U.S. took the day off Thursday and are maintaining a low profile to end the week, the rest of the world went on with business as usual. And from the tech side of the world, not all that business was positive.

South Korea's Samsung (SSNLF) hit the markets with some ugly guidance. The company expects second-quarter revenues around $47.6 billion with an operating profit of $5.53 billion. These numbers would be up 6.9% and 4.3%, respectively, from the previous quarter. Unfortunately, those numbers are also down 4.2% and 56% year over year. The last number there is the most eye-catching.

Margins are getting squeezed compared to last year in a big way. The biggest drag on Samsung is something we've already seen stateside: weak demand and dropping prices in DRAM and NAND. Memory accounts for about two-thirds of Samsung's revenue, so we're seeing a similar story play out as what happened with Micron Technology (MU) although Samsung seems a few months behind in the cycle. The company does anticipate a second half of the year improvement in the memory market (also the same thing we heard from Micron).

Additionally, Samsung appears to be suffering from unenthusiastic cell phone demand. Once again, this parallels another company, Apple (AAPL) , but with a slight delay. It's as if the company suffers from a trickle-down effect.

The similarities don't end there.

Samsung is the victim of its own country's trade war. Tensions are growing between Japan and South Korea with Japan forbidding certain exports to South Korea. That includes technology Samsung needs for its product.

Management tried to alleviate concerns saying that it won't impact next quarter, but beyond that is anyone's guess. Samsung suffers from a Trade War double-dip, though, as the U.S.-China trade war macro concerns also weigh on sales.

Unlike Apple and Micron, Samsung is unable to offer much in the way of visibility for recovery. It should cause investors to pause and question if Samsung is the exception or if Micron and Apple management are a little too optimistic.

Samsung doesn't trade in the U.S. The best proxy might come in the form of the iShares MSCI South Korea Capped ETF (EWY) that has Samsung as its top holding and a nearly 24% weighting in the ETF. It is a weighting nearly five times larger than the second largest allocation in the ETF. 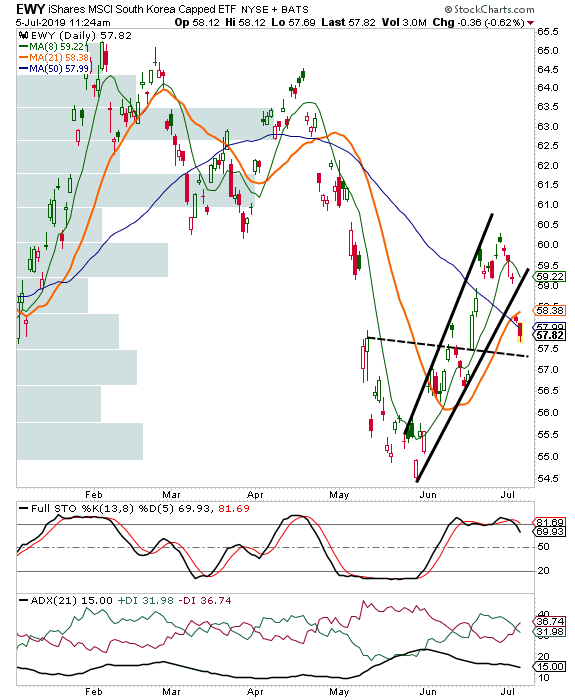 After a June bounce in EWY, the ETF is breaking lower from a megaphone pattern. One could also argue this is a bearish flag, consolidating the May drop, but I find the bounce too big to label it as a bear flag. Friday's close could land EWY under the 50-day simple moving average (SMA), which has been a struggle for bulls.

Additionally, we have bearish crossovers in the Full Stochastics and ADX. The Full Stochastics crossover in the move is troubling as it comes from overbought territory. We last saw that in late April and early February. Both instances led to declines with the April crossover leading to a sizeable decline.

In the end, this is an avoid for me. Samsung, and the EWY as a whole, not only face the same challenges as American competitors, but with the added layer of the trade war with Japan and not being able to succeed with a weak currency.

Should the Korean won strengthen, it will add another layer of challenges not even mentioned with the current ones above. There are simply better places to be with less risk.

Get an email alert each time I write an article for Real Money. Click the "+Follow" next to my byline to this article.
TAGS: ETFs | Investing | Stocks | Technical Analysis | Asia | Stock of the Day