Salesforce.com (CRM) is due to report earnings Tuesday. During his Mad Money program on Friday, Jim Cramer said Salesforce.com is too risky to buy ahead of earnings, only after.

With prices weak Monday, maybe purchases should be delayed longer.

The daily On-Balance-Volume (OBV) line has been in a decline from early March, signaling a shift to more aggressive selling.

The trend-following Moving Average Convergence Divergence (MACD) oscillator is below the zero line for an outright sell signal.

In the weekly bar chart of CRM, below, we have to imagine Monday 's break of the cresting 40-week moving average line. The OBV line has been moving lower the past three months and the MACD oscillator has crossed to a take profits sell signal on this longer time frame.

In this point and figure chart, below, we can see Monday's break of support. A downside price target of $137 is being projected. 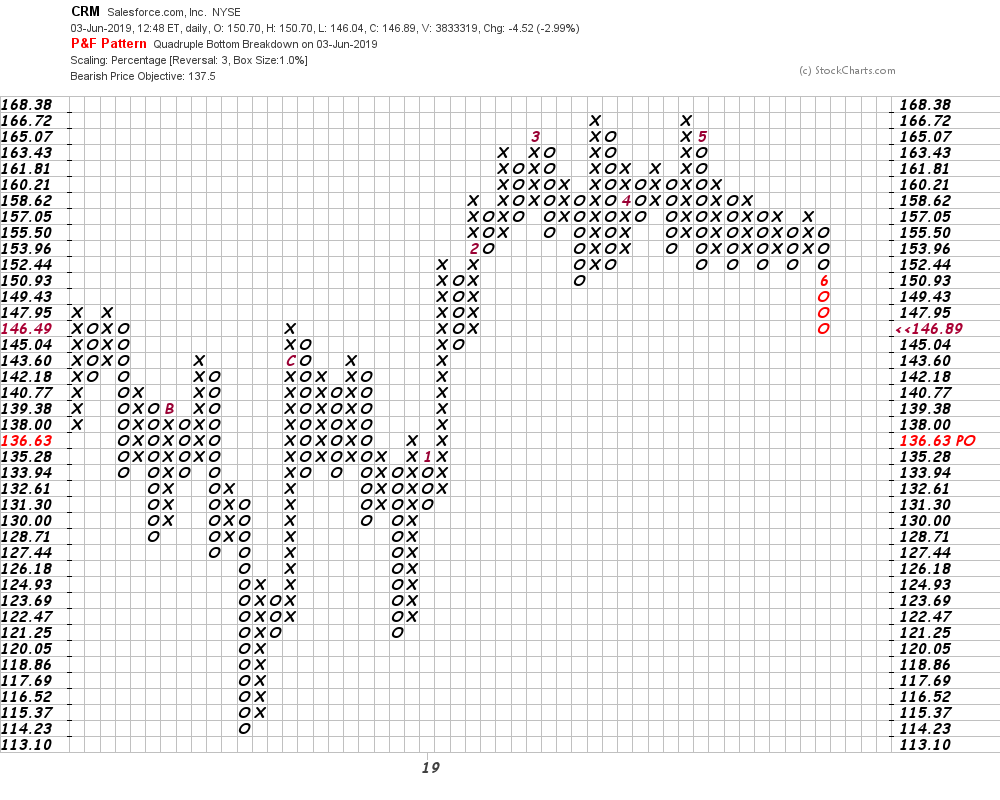 Bottom-line strategy: The price of CRM has been rolling over since March and broke key support around $150 ahead of earnings being reported Tuesday. We have a $137 price target from our point and figure chart, but I would want to see prices stabilize and the OBV line turn up before considering the long side of CRM.

Get an email alert each time I write an article for Real Money. Click the "+Follow" next to my byline to this article.
TAGS: Earnings | Investing | Stocks | Technical Analysis | Software & Services | Mad Money

There's an Opportunity Here to Invest in Campbell Soup

I wouldn't mind owning the shares, and they do yield 2.7%.

The big charge Cracker Barrel just took to write down its stake in the small Denver-based chain could spur another proxy fight with Biglari Holdings.

Learning How to Invest While Facing an 0-2 Count

The Covid-19 lockdowns and social unrest are two strikes against investors, who'd do well to be happy with hitting singles amid the uncertainty.