Waiting for what? This is a tough question. I have hit on declining trading volumes for a few days now. Volume remains light. Trading volume access the Nasdaq was in fact thin on a new level on Monday. That's while the Nasdaq Composite managed to reach new levels itself, yet again. The index was led higher by the likes Tesla (TSLA) , and Nvidia (NVDA) . The Dow Industrials, more dependent upon economic growth than perhaps the "newer economy" Nasdaq types, actually sold off just a bit, led lower by Boeing (BA) .

What has the broader market been doing? At least the large-caps? The S&P 500 at the headline added small, up 0.3%. Trading volume at the New York Stock Exchange remained skinny, but did increase from Friday's paltry levels. Interestingly, at 11 Wall Street, winners did manage to just edge losers, but declining volume bested advancing volume fairly decisively (55%).

That said, even on inconsistent macroeconomic data, even on failure to put a fiscal support package together, even on what still looks like a spreading virus, even if it hopefully has peaked, and even upon the postponement of the U.S./China review of last winter's trade deal, somehow this index stays on trend. 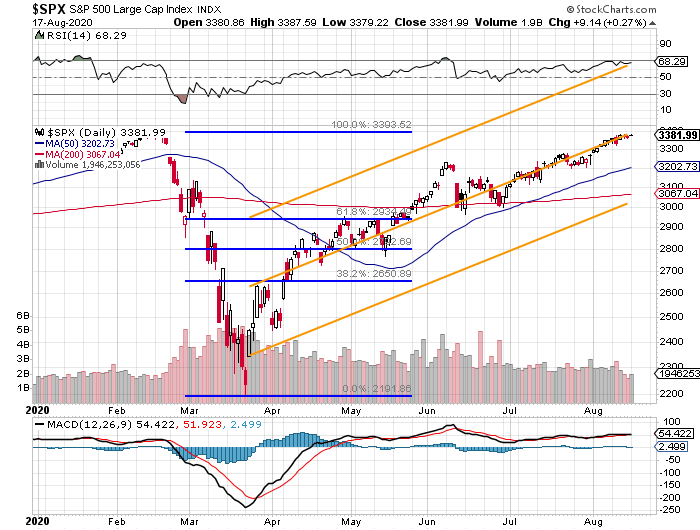 Does the market wait for another shoe to drop? We have already seen the U.S. dollar wiggle itself lower versus its peer reserve currencies. We have already seen yield spreads broaden, and then work themselves back in. We have seen put/call ratios, particularly those directly related to index trading show some weakness. Still, the trend is the trend, and the trend does not want to fight the Fed. The trend still believes in Congress for whatever reason, and lastly, perhaps most importantly, the trend believes in an effective vaccine, as well as effective treatments versus Covid in the sooner rather than the later.

There was something else quite noteworthy taking place on Monday, and it was not the now mostly virtual Democratic National Convention. On Monday, U.S. Commerce Secretary Wilbur Ross announced that companies must obtain licences prior to selling any type of microchip equipment to Chinese telecom giant Huawei that has been manufactured using either U.S. equipment or software.

This is an expansion of the already existing ban that prevented such sales only if the chips had been designed in house by Huawei or one of its businesses. In fact, the department also added an additional 38 entities to the existing sanction list in what amounts to an attempt to prevent Huawei affiliates from finding ways around the ban.

I am going to guess that most readers noticed Nvidia's 6.7% run on Monday and Nvidia just happens to be reporting its quarterly performance tomorrow (Wednesday). While most across of the community of analysts expect to see a slowing ahead in spending on the data center, a number of them came out on Monday and raised target prices for shares of Nvidia based on improving conditions across other businesses. Intel (INTC) already told us spending on the cloud is going to have to wind down a bit. Others have backed that up.

Susquehanna's Christopher Rolland took his price target for the name from $450 all the way up to $540, Oppenheimer's Rick Schafer made a similar move, establishing a new $500 price target, up from $400. While the two seem to differ on just how healthy, or not so healthy the data center may be or may not be going forward, there appears to be a broad consensus on strength in gaming, even in artificial intelligence.

Personally? You all know how much I love Nvidia. Understand that this is strictly business. I am going to have to shave something off of that position ahead of the Wednesday afternoon numbers.

I had to explain to one of my sons on Monday just who Dan Ives is. Why? Because my son is long Tesla. Twenty-five year old. Does something else for a living. Owns one stock. Understands and accepts that the one stock, at times, has a mind of its own. These are the folks who believe in Elon Musk. It becomes more obvious all the time that their faith has not been misplaced.

Wedbush analyst Dan Ives, as most readers know by now, took his price target for Tesla up from $1,800 to $1,900 on Monday morning, while assigning a "bull case scenario" price target of $2,500. Ives believes that demand for electric vehicles continues to grow in China, even accelerating over the summer. Ives acknowledges the increasing level of domestic competition in that corner of the world. Ives also expects to see growth in Europe offset U.S. industry weakness.

I'm just glad I covered that short before it became a monster. Gee whiz. 11.2% in one day.

Remember old Sarge fave Veeva Systems (VEEV) . The life sciences software provider was part of our original virus group here at Market Recon. The trend has been undeniable, and from the perspective of fundamental investment, the growth is there. What the stock has done of late, is form a short basing pattern after a long successful run. 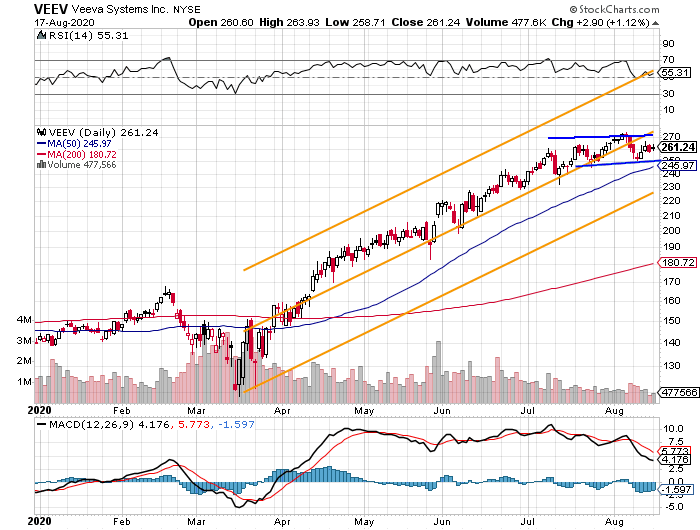 This basing has forced both Relative Strength and the daily MACD (Moving Average Convergence Divergence) to weaken. This, in my opinion, can do either of two things. One, the shares will test the recent high, and potentially break out anew. Two, these shares could be pulled back toward the 50-day simple moving average.

Meaning what Sarge? Means that I would not mind adding to this position, but not inside this base. Either at support or on momentum -- $246, or $273. I know that seems crazy, but that's how for me at least, this works. I need the Street behind me. That's how they think. No joke.

Get an email alert each time I write an article for Real Money. Click the "+Follow" next to my byline to this article.
TAGS: Earnings | Federal Reserve | Fundamental Analysis | Investing | Markets | Politics | Small Cap | Stocks | Trading | U.S. Equity