I think what we saw back in January with the wild moves in GameStop  (GME) and all the other Reddit stocks was highly speculative, but I also think it was a sideshow. The really speculative part of the market to me was not just all the ridiculous moves in the electric vehicle stocks and the pot stocks, but the special purpose acquisition companies. I see a market that gets carried away like we saw in SPACs and all I see is speculation.

I think the air has come out of a lot of those names for now. SPACs are no longer littering up the new high list. Back in early February we saw Nasdaq with more than 600 stocks making new highs and nearly 40% of those were SPACs. And the way they are counted, with their when-issued and Class A type stuff, means they got counted three times for one SPAC.

When speculation like that unwinds, we tend to see more volatility, not less. I have said I think Nasdaq is going to continue to be volatile and I do not foresee that changing in the near term. But I also think Nasdaq remains oversold enough to rally again.

The number of stocks making new lows on Nasdaq is no longer expanding. And the Oscillator remains oversold. You can see that Nasdaq's Oscillator is still far below the zero-line, whereas the New York Stock Exchange's Oscillator has punched up through it.

If I am correct and those stocks do rally again, will they run smack into resistance overhead? I think so. In fact isn't that what we saw some of on Wednesday?

Yet Nasdaq saw 427 new highs on Wednesday, which is more than the 318 new highs we saw on Tuesday when all that growthy oversold stuff rallied. And the new high list wasn't littered with SPACs.

Over on the NYSE the breadth was good enough to make a new high. It was also good enough to see the McClellan Summation Index finally stop going down -- the first time in a month. And if you squint hard enough, you can see it is trying to curl up now. This indicator tells us what the majority of stocks are doing.

On the sentiment front, the Investors Intelligence Bulls are now down to 51%, the lowest reading since September. I do think the complacency we saw a month ago has been erased. 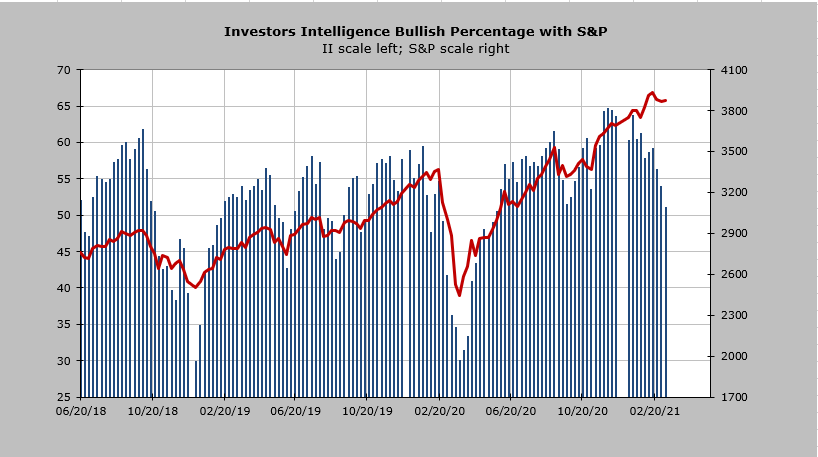 Thursday, we'll get to see some new sentiment indicators to see how quickly it has shifted this week.

Get an email alert each time I write an article for Real Money. Click the "+Follow" next to my byline to this article.
TAGS: Mergers and Acquisitions | Investing | Stocks | Technical Analysis | VIX |