For his "Executive Decision" segment of Mad Money Thursday night, Jim Cramer spoke with Richard Fain, chairman and CEO of Royal Caribbean Cruises Ltd. (RCL) , which just posted an eight-cents-a-share earnings beat. Shares of RCL are up 16% for the year.

Fain said business at Royal Caribbean remains fantastic, which is why the company raised their earnings outlook. "Anyone who doubts that needs to take a cruise," he said. When asked about those strong earnings, Fain explained that innovation is in the company's DNA and they are constantly working to raise customer satisfaction, which in turn leads to more guests and higher earnings.

Royal Caribbean's recent addition of the Galapagos Islands as a cruise destination is one such innovation, and Fain said that cruise is a life-changing experience for many who've taken it. Not everything is perfect, however. Fain explained that they learned about the Trump administration's ban on travel to Cuba at the same time as everyone else and needed to abide by those new regulations. He characterized the move as a "bump in the road" for the company.

Let's check out the charts to see if there are any other bumps to be seen.

In the daily bar chart of RCL, below, we can see that prices have weakened the past three months. RCL is below the declining 50-day moving average line and the bearish 200-day line.

Trading volume has increased the past five or six weeks and the On-Balance-Volume (OBV) line has turned lower telling us that sellers of RCL have been more aggressive with heavier volume being seen on days when the stock has closed lower.

The Moving Average Convergence Divergence (MACD) oscillator has crossed to the upside this month to generate a cover shorts buy signal.

In the weekly bar chart of RCL, below, we can see a rally to early 2018 and then three lower peaks. Prices are just below the declining 40-week moving average line. The weekly OBV line has been "rolling over" for several months and suggests a slow move toward more aggressive selling.

The MACD oscillator crossed to the downside in June for a take profits sell signal. A move below the zero line could happen soon for an outright sell signal.

In this Point and Figure chart of RCL, below, the software is projecting an upside price target of $124, which would keep the pattern of lower peaks intact. A trade at $108.68 will turn the chart bearish. 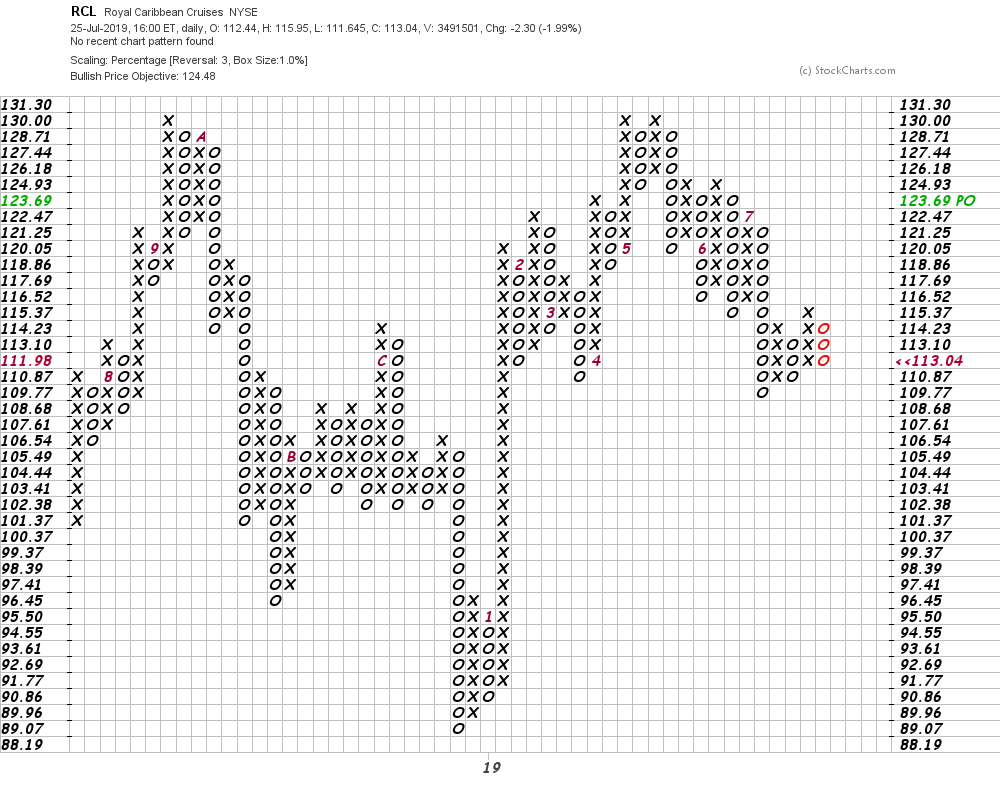 Bottom-line strategy: Over the years I have found when the CEO says that everything is fantastic and the chart is pointed down I want to follow the chart. I would be prepared for lower prices ahead.

Get an email alert each time I write an article for Real Money. Click the "+Follow" next to my byline to this article.
TAGS: Investing | Stocks | Technical Analysis | Trading | Transportation | Mad Money | Executive Interview | Consumer Discretionary

The Foundation for the Next Major Market Cycle Is Developing Now

This corrective phase may go deeper, but we see some good support.