I had an interesting question that arrived in my inbox Monday: At what point do we say the Dow Jones industrial average has broken out of the channel? Do we use a 3% rule (if it clears the breakout by three percent, it's a good breakout) or do we fuss that it has not yet taken out the August high?

It's often hard to say. From a chart standpoint, I would say it's a breakout. The question is whether it is a false breakout. What I know is that the Dow stocks have become the new go-to stocks and by almost any measure they are overbought. So when we look at the chart, we watch that upper blue line. We ought to see a pullback to the line, but if the Dow slips back under, say 32,000, then we'd know it was a false breakout.

The Dow is a price-weighted index, so the highest price stocks get the most weighting. I found myself staring at the chart of UnitedHealth (UNH) on Monday, because it is the highest priced stock in the index. Do you realize this stock is the same price it was in April? Do you also realize that it made its high in early November (so far)?

I'm not even looking for higher highs than August (although that would be a positive), I'm talking about a mere two weeks ago when the Dow was 1,000 points lower than it is now. 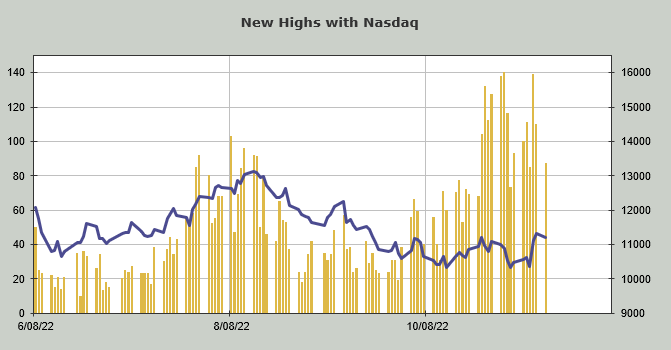 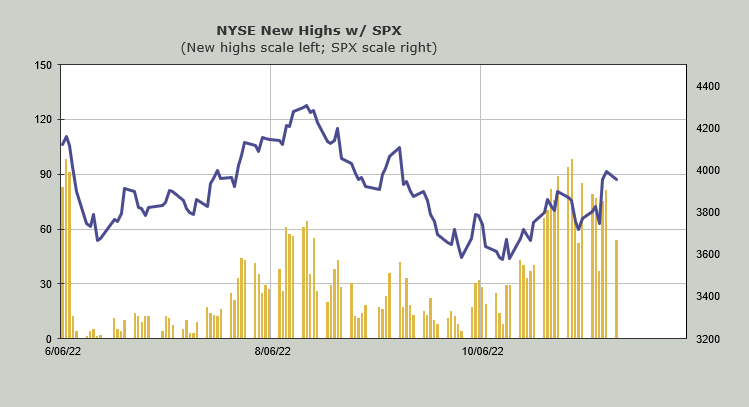 For the United Health chart, I would say that it's gone nowhere but, it now has that lower high, so a lower low would make it more vulnerable than it already feels. For now I would expect around $500 to hold on the first trip down, but a rally to another lower high would put this stock in the "watch out" category. And if United Health gets into trouble, it ought to have an effect on the Dow, as it is the largest weighting.

Elsewhere the breadth never got positive when the indexes were positive on Monday, but in the end the McClellan Summation Index is still rising for now.

Sentiment, which Friday seemed to change toward a more positive tone in a heartbeat, was reigned in with Monday's decline. Although if I hear one more person say that the seasonality favors an up market until year end I might scream.

I can cite plenty of Decembers that didn't wow us on the upside. That's why we'll watch the indicators. If the new highs continue to falter and breath can't keep up I am going to believe in a more volatile December. But for now the market should try and rally one more time before Thanksgiving.