By BRUCE KAMICH May 31, 2019 | 12:48 PM EDT
Stocks quotes in this article: ROST
Jim Cramer mentioned a number of retailers during his Mad Money program Thursday night. Like Ross Stores, Inc. ( ROST) , which had good a quarter but a mixed outlook.
Let's check out the latest charts and indicators.
In the daily bar chart, below, we can see the share price of Trifecta Stocks holding ROST has had a wild ride up and down and up again. Prices bottomed with the broader market in December and rallied to a high in April. The April high stopped at the underside of the November zenith.
ROST has been slipping lower the past six weeks, with prices now below the rising 50-day moving average line and testing the 200-day line from below. The volume pattern was heavy into the November-December period, but slowed to April. Trading has picked up in recent weeks as prices eroded.
The daily On-Balance-Volume (OBV) line moved higher from December to the middle of May, signaling more aggressive buying. The Moving Average Convergence Divergence (MACD) oscillator turned lower in April and moved below the zero line this month for a sell signal.

In the weekly bar chart of ROST, below we can see some weakness. Prices are testing the rising/peaking 40-week moving average line.
The weekly OBV line looks like it is rolling over and the MACD oscillator is signaling a take profits sell.

In this point and figure chart of ROST, below, we can see a nearby price target of $86, but further declines cannot be ruled out. 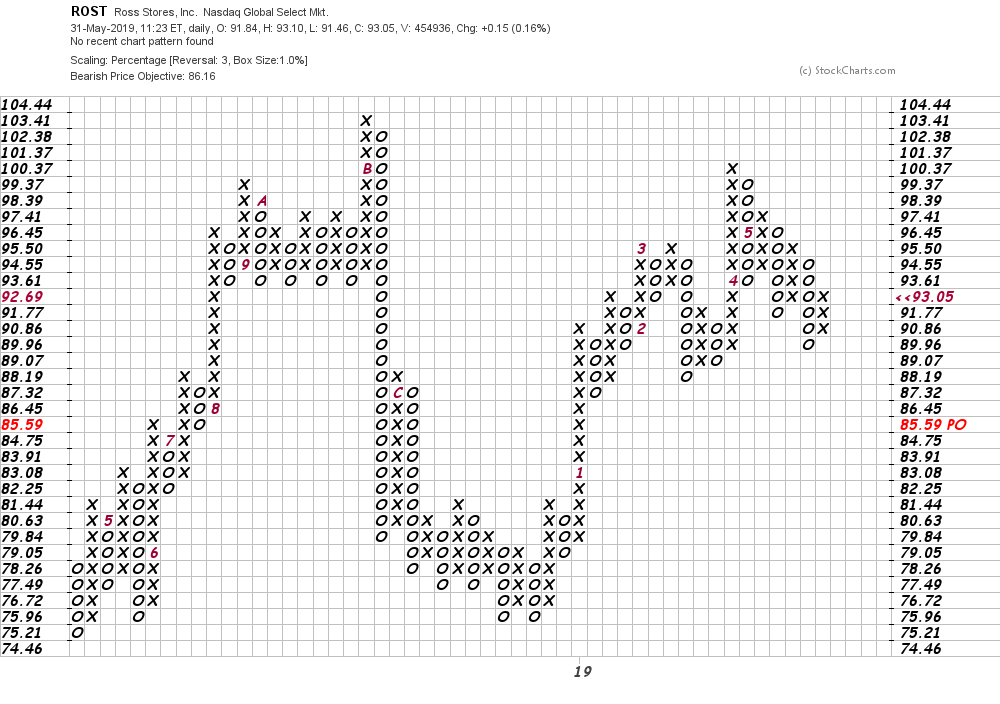 Bottom-line strategy: The charts and indicators of ROST suggest that prices can weaken, but a big decline does not seem imminent. We don't have any buy signals, so I would hold off on purchases, even though the downside may be limited.

Jim Cramer: This Is a Great Market ... Unless

As we get higher, there are a growing number of alarms that could awake the great bear.

These Big 4 Names Could Cause Outsized Trouble

Here's why we must closely watch earnings for Alphabet, Apple, Amazon and Microsoft.