I feel as though I have begun or ended so many of my writings lately with a type of Public Service Announcement about Covid-19. I will do so again today. Take care of yourself and your family. Wash your hands.

I am no expert, I don't even pretend to be one, but this will likely get worse before it gets better. And there will also likely be some real fear and panic from the public before it is over -- worse than the stockpiling we've already seen, as it spreads into communities. I don't mean to scare you by saying that, but having lived in Shanghai during SARS, I am familiar with the stages of acceptance and public panic.

How does this relate to the market? At some point, the market will price in the worst-case scenario for the economy. Consider that the peak for the majority of stocks came in mid-January, before most had even heard of this virus. Markets anticipate, then they react.

Late last week, I reviewed the reasons I think we are due an oversold rally this week. Using my own Oscillator, we are extremely oversold now. The Daily Sentiment Indicator (DSI) for Nasdaq and the S&P is now at 8. Sure, they can get more extreme and an oversold market can get more oversold, but I think this is the week the rubber band has been stretched too far.

Now let's get back to the intermediate term. The Hi-Lo Indicator for Nasdaq is now at 15%. The New York Stock Exchange's is at 8%. That's oversold. Now take a look at the charts and notice how often it "double taps." My expectation is that this market will eventually see a double tap. I still have that spring/summer of 2010 scenario in my head, where we tested the lows several times and it took months to resolve itself off the initial decline.

Many seem confounded that the Citi Panic/Euphoria Model has only now fallen under Euphoria. I was quite surprised in December and early January that it had not gotten to Euphoria. It finally did so in mid-January -- just as the majority of stocks were making their highs. So the indicator was correct by telling us to wait, wasn't it? Look how long it took to go from Panic to Euphoria.

Back in mid-January, the 10-day moving average of the equity put/call ratio got to an extreme low, not seen since April of 2010. It has surged in the last week, but notice it is not even at the August high yet. I expect this indicator to peak and turn down this week, but my point is when it comes from such a low spot it means it will take a lot to get it to swing to the other side.

The 30-day moving average of this same indicator, an intermediate-term look at sentiment, also got to an extreme not seen in a decade in mid-January. It too has moved up, but does this chart say "panic" to you? It is still far from the September peak reading. Intermediate-term indicators take a long time to shift.

The Investor's Intelligence bulls were at 41% last week with bears at 20%. That's still double the bulls to bears. Now, I expect to see the bulls in the 30s this week, but at least as of last week, this did not show panic. Or what about the American Association of Individual Investors, where we saw the bulls rise 8 points last week?

The good news is that the Consensus Bulls have backed off dramatically. But they are nowhere near the lows of 2015 to 2016 or 2018. 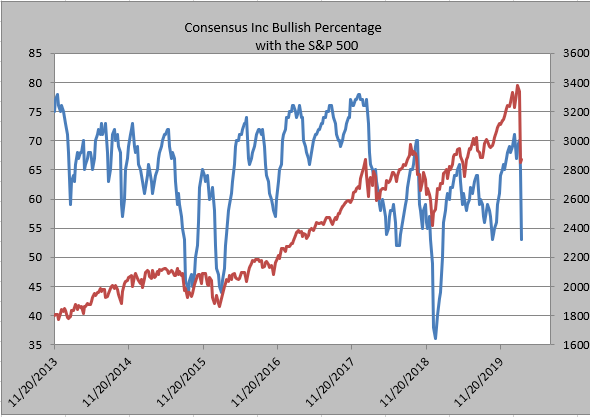 Some might highlight the CNN Fear and Greed Index being at 6 as extreme. It is. Just like the DSI is extreme in the single digits. That's my case for an oversold rally. But step back and look at a longer-term picture of Fear and Greed. Look how many "double taps" we saw after the Volatility implosion in early 2018 and the decline of late 2018. 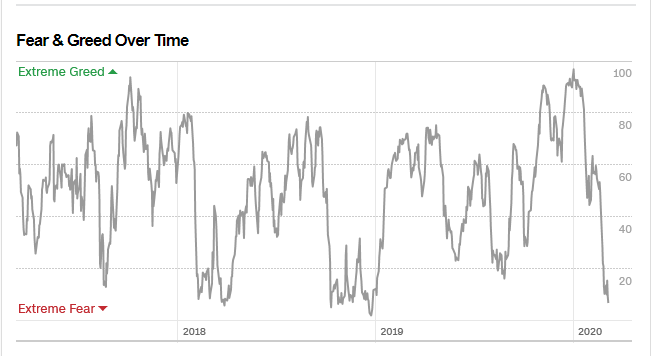 In sum, I think we rally this week. But I also think we will come back down after that. It will take a while to work this through after an immediate decline off a new high. The sentiment and intermediate-term indicators say that to me. The roller coaster ride is not yet over.

Get an email alert each time I write an article for Real Money. Click the "+Follow" next to my byline to this article.
TAGS: Investing | Stocks | Technical Analysis | Coronavirus

Why I Am Thankful That I Went Deaf and Lost Everything

We all face obstacles in life, but with optimism and persistence you can overcome anything.

The Trimmings Are Where It's at During Thanksgiving Trading

Despite indexes dipping, trades could be found in cannabis, China names and special purpose acquisition companies.

Put the Pedal to the Metal on Silver

This agriculture name stands out from a quality perspective.