By STEPHEN GUILFOYLE Feb 06, 2020 | 12:22 PM EST
Stocks quotes in this article: QCOM, TSM, AAPL
I'll tell you straight up. My instinct was to initiate a long position in Qualcomm ( QCOM)  on Thursday morning's post-earnings dip. Then a request to write up a piece on the name. So, I will wait until publication in a few hours and see if I still have a dip to play with. We'll see.

The Beat: Breaking Down Earnings

Just after the closing bell on Wednesday, Qualcomm released fiscal first-quarter results for the period ending Dec. 31. The firm reported adjusted earnings per share of 99 cents, which was a solid beat. It was also year-over-year earnings growth of 32%, the first annual growth at all for the firm after five consecutive quarters of contraction. Qualcomm also posted sales of $5.08 billion, another beat -- and the first year-over-year growth (5%) after five straight quarterly minus ticks. Color me impressed. Because I am.
Now to try to fully understand Qualcomm, one must understand the unique breakdown of the firm's business segments. The largest segment in terms of revenue would be QCT, or Qualcomm CDMA Technologies. This unit designs, develops, and produces application processors and third, fourth and fifth generation mobile chips, often manufactured by third party foundries, such as Taiwan Semiconductor ( TSM) to consumer electronics producers, such as Apple ( AAPL) . This unit printed revenue of $3.6 billion, down 3% from the same quarter last year, but guided toward revenue of $3.9 billion to $4.5 billion for fiscal Q2. The catch here? Earnings before taxes margin of just 13%, though that margin did beat expectations, and the guidance for Q2 is for 15% to 17%.
The margin is in the other, "smaller" unit. Let us discuss QTL, or Qualcomm Technology Licensing. This is the business of certain patent rights, or more broadly parts of the firm's portfolio of intellectual properties to other firm that manufactures wireless devices of their own. This business put sales of $1.4 billion to the tape for the quarter reported at an EBT margin of 72%. Moving ahead, the firm sees this line performing less well in Q2, with revenue expected to land in between $1.0 billion and $1.2 billion with an earning before tax margin that decreases to 61% to 65%.
In aggregate, Qualcomm looks for EPS of 80 cents to 95 cents on revenue of $4.9 billion to $5.7 billion for their second quarter. Both estimated ranges move their mid-points above consensus view. There's a lot to unpack here. We're not done.

Billy Up the Block

Let me tell you about Billy. Many reading this piece probably had their own Billy. Billy was my pal. Still is. Just not in baseball. Billy was the best pitcher in my neighborhood. No, not a professional ballplayer, he became a successful certified public accountant. What Billy could do growing up was make the ball dance as it approached the plate. Way before anyone else could throw a curve. Billy could make you duck out of the way on a called strike. Kind of stunk for those of us who had taken our turn at bat just knowing this time, we were taking Billy deep. Only we didn't.
Right now, Qualcomm is facing a couple of pitches that investors are not quite sure what to do with. Hence, the early morning weakness. For one, Qualcomm is a 5G technology rock star. Last night, CEO Steve Mollenkopf said, "Our strong fiscal first-quarter financial performance reflects a significant inflection point for Qualcomm as we begin to realize the benefits from the ramp of 5G."
But also last night, CFO Akash Palkhiwala in the call, said that Qualcomm now expects "significant uncertainty around the impact from the coronavirus on handset demand and supply chain." This would be why some of the guidance is so broad. Mollenkopf went on during his turn at bat to mention that the firm could have other regions back up China should supply chain issues present.
In completely unrelated news, Qualcomm acknowledged receipt on Dec. 3 of a request for information from the European Commission, that the firm is responding to. The European Commission is looking into whether the firm had engaged in anti-competitive behavior through the leveraging of its market position in next generation, 5G baseband processors. These things take time, but the fact is that Qualcomm has been tagged with large fines by the European Union, and this issue, even if leading to nothing, could potentially weigh on investor sentiment. 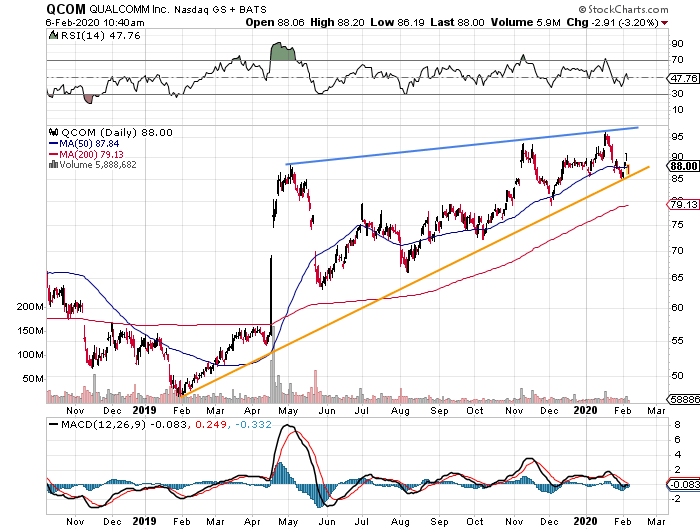 What I thought I saw the last time I wrote to you regarding this name was a forming cup with handle (May through December) that really did not materialize. Nor does it look all that much like a cup with handle any more. What I think I see now is what we call a rising wedge, meaning that we are seeing an acceleration of higher lows (orange line), coupled with a deceleration of higher highs (blue line). I am really not that thrilled to see this picture form near the top of the chart, as it could mean to me at least, a reduction in investor enthusiasm.
What I will be watching right now, is for the shares to survive this test at the 50-day simple moving average of $87.84. The shares pass this test, and I am fine in going ahead with the initiation of an entry-level sized (about 1/8 of intended position size) long. They fail here? Then I probably take this pitch and wait to see if these shares make a run at the 200-day line ($79.13). I'm still impressed.
(AAPL is a holding in Jim Cramer's Action Alerts PLUS member club. Want to be alerted before Jim Cramer buys or sells it? Learn more now.)
Get an email alert each time I write an article for Real Money. Click the "+Follow" next to my byline to this article.
TAGS: Investing | Stocks | Technology | Technology Hardware & Equipment | Stock of the Day