Thirty-seven years ago was my first time running into these beasts. It seems like yesterday. I was training, at a route-step along a sandy trail. We had heavy packs on our backs, and it was in the early morning. Mortar fire was thundering somewhere in the distance. The trail led up a small hill to our front. It was already hot and humid, but still foggy. The ground began to rumble. What the? We scurried off into the treeline on both sides of this "deserted" road. The rumble grew louder as we hid. The profile of an M60A1 Main Battle Tank emerged over that hill. It was beautiful. The tank moved down that hill right through our position, and then a second tank appeared. Then a third, then more. The noise was more than you might imagine, as ten of these magical beasts methodically passed by. The machine gunner, poking out of the trail vehicle, gave us a thumbs up, just to let us know that he saw us. Lesson learned. PepsiCo (PEP) , to me, is like that line of old Pattons. Moving forward, steadily, forcefully, impressively. Either get out of the way, or move in the same direction.

PepsiCo reported on Thursday morning its fourth-quarter financial performance. The firm posted adjusted earnings per share of $1.45. Some see that as a one penny beat. I see this number as in line with expectations. Revenue for the quarter landed at $20.64 billion. That number was indeed a beat of consensus view, and good for year-over-year growth of 5.7%. Revenue growth, by the way, is accelerating for this firm, up from 4% for Q3 and 2% for Q2.
Perhaps the larger news was the fact that the firm reported organic sales growth of 4.3%. This metric excludes impacts of acquisitions, divestitures and fluctuations in currency exchange rates. Wall Street was looking for something along the lines of 3.7% here.
Among business units, Beverages North America remains the largest, contributing $6.225 billion in net revenue to the whole, up 3.6% over last year, while Frito-Lay hit $5.148 billion, up 2.9%. Operating profit increased by 5% and 3% for these units respectively. Sales in Europe increased 14.6% to $3.886 billion, while operating profit there soared 28%, at least partially due to a restructuring of the business in the Czech Republic, Hungary, and Slovakia.
Latin America is also performing well, as sales increased 5.1% to $2.542 billion, which produced 16% growth in operating profit. Among smaller units, sales continue to grow at both the regions of Africa, Middle East, and South Asia and of Asia Pacific, Australia, New Zealand and China.
Quaker Foods North America, however, remains a problem. This unit, by far the smallest, barely showed sales growth at all, while operating profit suffered a 21% decline, as expenses ran higher for both advertising and product necessary commodities.

Unfortunately for the stock, at least for Thursday, the firm is, in my opinion, conservative looking ahead to 2020. This is not unusual for this firm, and I am not rattled by this news at all. For the year ahead, PepsiCo guides organic revenue growth toward 4%. Consensus is just above 4%. The firm sees roughly $11 billion in cash from operating activities that will produce around $6 billion in  free cash flow. That's how the firm can also guide investors toward a rough $7.5 billion in cash returns to shareholders; $5.5 billion in dividend payments and another $2 billion in share repurchases. As to earnings, PepsiCo now sees core EPS of $5.88 for the year, slightly below the $5.96 that Wall Street wanted to hear.

First, I want to show you the view from way above. I don't know when I saved this chart, because I did not date it, but check this out.

This Pitchfork model that begins way back in the summer of 2015, is still in tact. That's some trend. Now, let's go to a usable chart to shape a current strategy for this name. 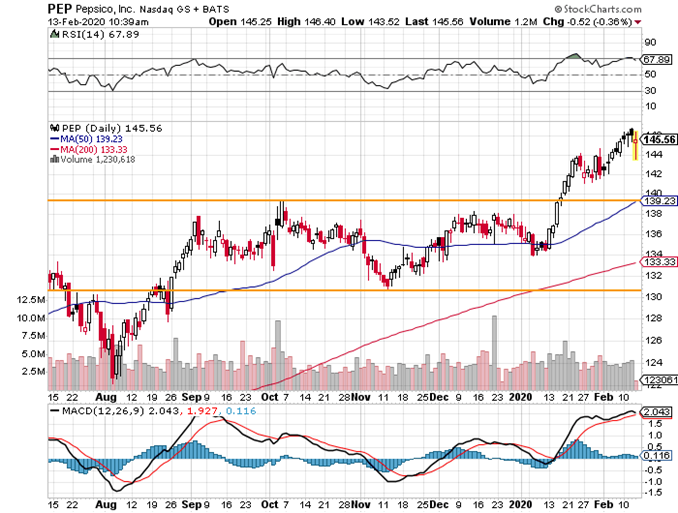 As readers will see, these shares went through a four-month basing pattern prior to breaking out. Some profit-taking post-earnings amid a weak tape should be expected. One will also see that Relative Strength is in good shape, though the daily Moving Average Convergence Divergence, albeit at solid levels, reflects Thursday morning's selling pressure. I think it's important that the 50-day simple moving average has caught up to the pivot point that was created by the already mentioned base. This is my "worst case" support level. I add here.
My target price remains $165. That might be aggressive, but that's 20% from my pivot. My panic point for this name remains $128. PepsiCo runs with a dividend yield of 2.62%. Maybe enough for someone's dividend book, maybe not. That said, I can fully endorse this name as a defensive holding for nervous portfolio managers, and more importantly, nervous home-gamers.
Get an email alert each time I write an article for Real Money. Click the "+Follow" next to my byline to this article.
TAGS: Earnings | Investing | Stocks | Food & Staples Retail | Food & Drink | Stock of the Day