...therefore never send to know for whom the bell tolls; It tolls for thee.
- John Donne, Devotions upon Emergent Occasions, Meditation XVII

That "ding dong" ringing in your ears may not be the entry sound from yet-another Zoom (ZM) call. Perhaps "they" just rang the topping bell, just like "they" did in March 2000. Does history rhyme enough to convince you?

The recent comparisons of Tesla's (TSLA) market cap to those of the other major automakers jogged my memory, so I dug up one of the most famous pieces of market research ever published, at least for the over-50 crowd like me. All you old timers, does this ... ring a bell?

Cisco (CSCO) went public in 1992, just in time to supply routers for the massive internet-driven telecom build-out of the 1990s. Cisco was the rock star stock of the 1990s, and was regularly touted as the company most likely to surpass a $1 trillion market cap. Here is the chart of Cisco from its IPO through March 24, 2000. (The Y axis is log scale, otherwise you would need a Times Square-sized screen to see the rise!) The chart says it all:

On March 24, 2000, Ned Davis Research published this in its "Chart of the Day." Being a trend-follower, NDR was not calling a top. It hates to "fight the tape," and "cannot advise stepping in front of a freight train" ... but it was at least open-minded enough to be impressed by the analysis done by UAS Asset Management, and to publish it. The analysis is one any businessman can appreciate.

Back then, if you had $500 billion to invest, what companies would you buy whole? Would you put it all into one company, Cisco, that earned $2.5 billion in 1999? Or would you buy a basket of 25 of the most well-known, reputable corporations in America? You could own all of them, whole, and could generate half a billion in revenue and $36 billion in earnings. Looking at it that way, it seems like an easy choice, does it not?

Did you hear the bell ringing?

Here is the fate of Cisco, from that day to the present.

In fact, Ned Davis inadvertently called the top, almost to the day. The Nasdaq topped that week, completing an 80% rally during the first quarter of 2000. 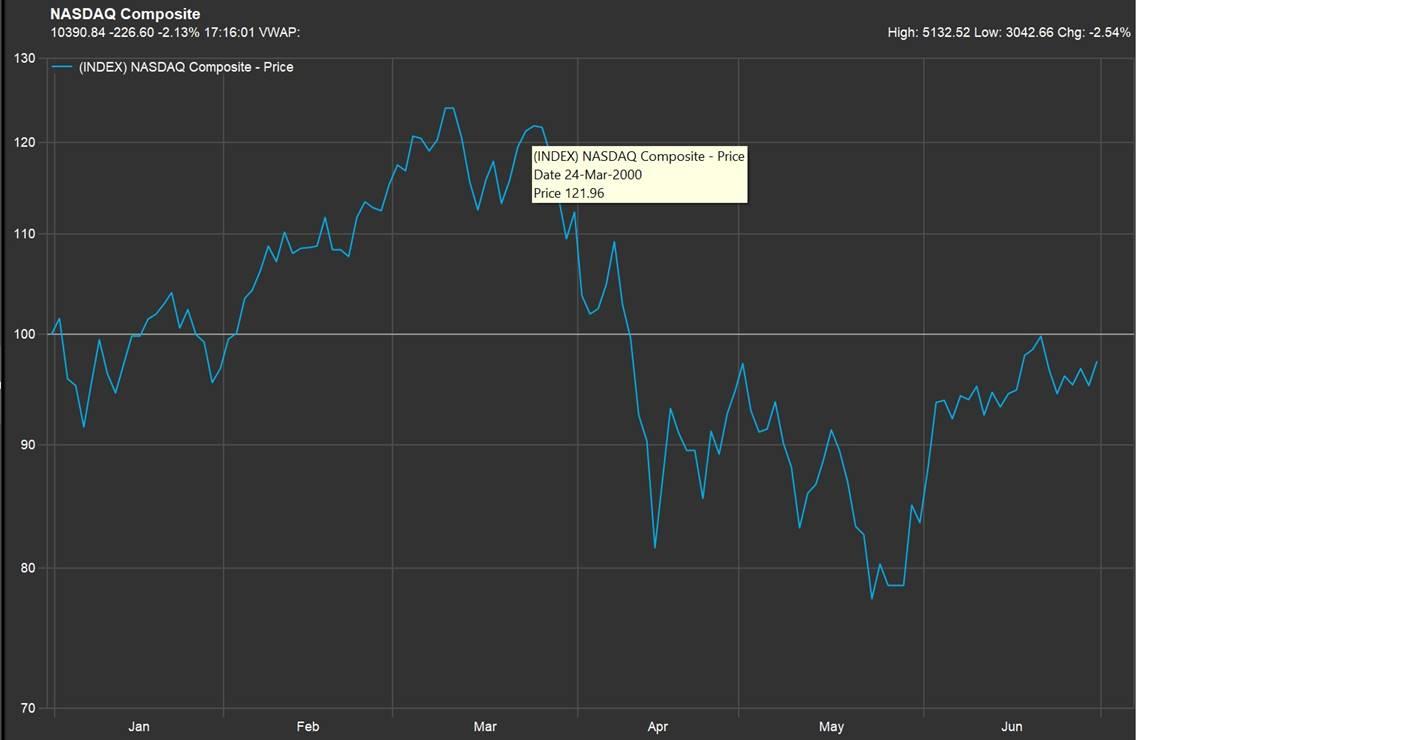 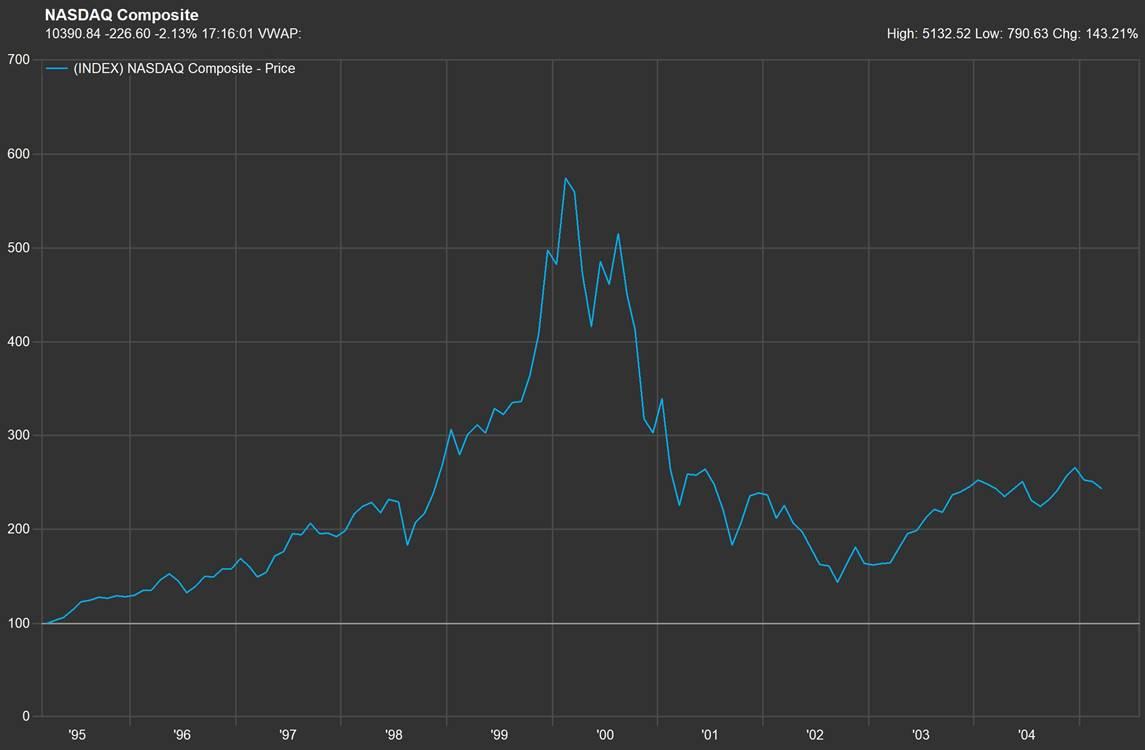 So let's hop into my machine. It's not the time machine, it's the "rhyme machine." Let's fast forward to mid-2020, when 30 million or more are unemployed; the gross domestic product is about to print at a decline of 20% to 50%, depending on which economists you prefer; whole industries are going bankrupt; the viral pandemic appears to be resurging, causing many states to be locked down again; and, the Nasdaq is making all-time highs. 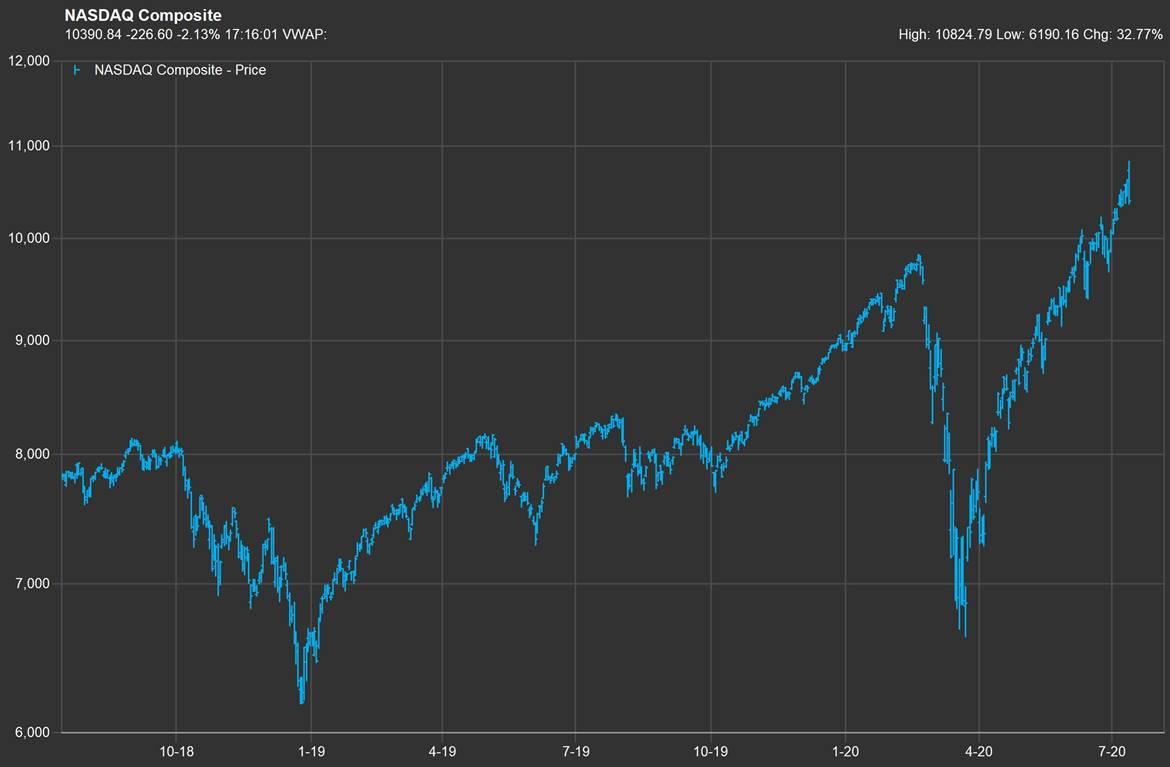 By coincidence, I happen to have $268 billion to invest, and am interested in the auto industry. Taking the UAS approach, I examined my options. I could buy Tesla, that innovative, s3xy company of the future, the Cisco of our era. Or, I could buy whole eight of the largest automakers in the world, generating almost $1 trillion of revenue and earning $37 billion. Let me think...

Similarly, now that CEO Elon Musk has surpassed Warren Buffett in wealth, I could consider spending my $268 billion to buy a big chunk of Berkshire-Hathaway  (BRK.A) .

How do these two options compare?

Buying 62% of Berkshire gives me a business with $200 billion in revenue and $50 billion of earnings. Decisions, decisions. 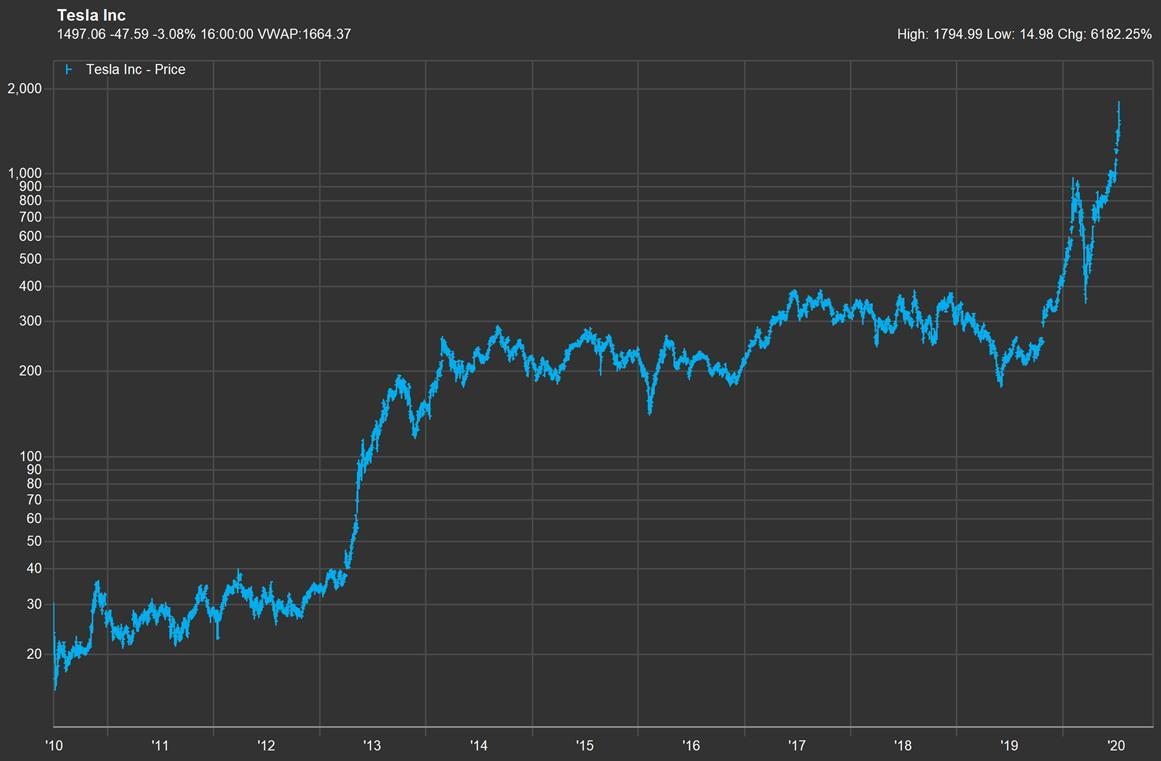 Tesla has a great chart -- not as good as Cisco, but not too bad. Should I take Ned Davis' advice and not "fight the tape" and not "step in front of a freight train"? Or should I buy, whole, giant companies with giant revenue and giant earnings?

California shutting down again could be the bell rung at the top. The U.S. economy is in a "V"-depression that could turn into a real 1930s-style depression if shutdowns resume across the country. Even absent that, you can see that most businesses are recovering slowly, at best. I find it very hard to reconcile current and future economic conditions with a market-making new highs, even if driven by some names that are genuinely doing well (like Amazon). All the old-timers I know are scratching their heads, they understand Fed liquidity can drive a bubble for a while, but it cannot fight the hurricane headwind of a collapsing economy.

I don't know whether we'll test the March lows, but I am highly confident the next move is down. Old-timers that lived it 20 years ago can see and feel the froth, the disconnect of valuations from reality on the ground. I am playing the next leg to the downside with SPDR S&P 500 ETF  (SPY)  put options -- shorting is too dangerous, Ned Davis is right about not stepping in front of a freight train. I am also buying long-dated and way out-of-the-money put options on Tesla, the "new Cisco" of this cycle.

Much has been made of the Robinhood traders flooding into the go-go names. Every generation, young traders have paid their tuition for "trading school" by transferring their wealth to the old-timers. The young-uns will study history and dismiss it (It's different this time, they say), the old-timers lived it and know better. I heard a bell the other day, and it sounded awfully familiar.

Get an email alert each time I write an article for Real Money. Click the "+Follow" next to my byline to this article.
TAGS: Investing | Stocks | Bearish Bet