By STEPHEN GUILFOYLE Feb 05, 2020 | 12:21 PM EST
Stocks quotes in this article: DIS, VZ, NFLX, AAPL, AMZN, CMCSA, T
"The Mandalorian." Now, this is my favorite series. Just my opinion. No joke. Let me tell you why. Yes, the show has the cutest of them all, Baby Yoda. One can not help but laugh as this little creature gets himself into trouble, or just plain gulps down a cup of soup. It's more than that, though. The show is made well. The plots are centered around a central character: a warrior with a conscience, whose face the viewer never sees, yet ends up rooting for, even invested in.
Invested in...  that's what this is all about. From the investment made by the Walt Disney Company ( DIS) in expanding the firm's ability to compete in what for now, is a money losing venture, to you and I. How deeply, or broadly, do we want to be invested in streaming entertainment, not to mention all of Walt Disney's other businesses, the ones that subsidize this now apparent vehicle for growth.
Oh, one more thing about "The Mandalorian":  It creates time, time two sons now in their 20s make to hang out with their aging Dad, time that could be spent doing something else with someone else. Now, what is that worth? Answer is, a whole lot more than money.

...And the Numbers Are in

The Walt Disney Company reported the firm's fiscal first-quarter performance on Tuesday evening. For the quarter, Disney posted adjusted earnings per share of $1.53, which was a solid beat over the consensus view. The firm printed revenue of $20.86 billion, also a beat, and year-over-year growth of 36.3%. There were some not-so-hot numbers mixed into the results. Net income from continuing operations saw a 23% decrease to land at $2.133 billion, which in turn forced free cash flow down to $292 million, for what I see as a very explainable 68% decline from fiscal Q1 2019.

Speaking of explanations, the majority of the firm's business units are indeed performing well, but will need some discussion. The largest segment in terms of Q1 revenue contribution would be parks, experiences and products group. That number landed at $7.396 billion, up 8%. more or less, meeting consensus view. Obviously, this group has performed better domestically than internationally. Merchandising has performed well. As for lodging, domestically, per room spending increased 4% on 92% occupancy. At the parks, per capita spending increased 10%. But both Shanghai Disneyland and Hong Kong Disneyland are currently closed due to the Wuhan coronavirus spreading in China. Disney's CFO Christine McCarthy estimates that should the Shanghai park remain closed for two months, the firm could see a hit of $135 million. Should the Hong Kong park also remain closed for two months, that would amount to an additional $40 million gone. The Hong Kong park, by the way, already saw a Q1 hit of roughly $80 million due to the widespread protests that took place there over the past quarter.
In terms of revenue generation, media networks is fast gaining on parks, experience and products. Media networks contributed $7.361 billion in sales, up 24%, and better than expectations. Within this unit, cable networks produced more revenue than did broadcasting, however broadcasting is growing operating income at a faster pace than are the cable networks. Both of these sub-units saw a benefit through the integration of the 21st Century Fox assets acquired last year.
Studio entertainment, as one might guess, absolutely exploded to then upside for the quarter reported, as offerings from the "Frozen" and "Star Wars" story lines led the way. This unit saw sales increase 106% year-over-year to $3.764 billion, well ahead of expectations. The problem? This performance creates a tough comparison going forward in a year where there is already known pressure elsewhere.

We'll gibe this Disney segment its own segment in my piece for readers who really just want to scan down to this part. The direct to consumer and international segment generated revenue of $3.987 billion, up 334%, and easily beat what Wall Street expected. Operating loss for this segment indeed ballooned from $136 million to $693 million. Sounds like a lot, but truth be told, the Street was looking for considerably worse.
Within the group, Disney+ ended the quarter with 26.5 million subscribers (that number at last count is up to 28.6 million, so still growing rapidly.) Tuesday night, CEO Bob Iger broke down where subscribers had come from. Apparently, half came from the firm's own website, which is a positive, as those revenues are not shared. An additional 20% have come from the firm's deal with Verizon ( VZ) , and the rest from various other vendors.
Among the firm's other streaming services, Hulu saw a 33% increase to 30.4 million subscribers, while ESPN+ (my favorite) jumped to 6.6 million subscribers from just 1.4 million one year ago. Just an aside, Disney bundles the three services for consumers for a cool $12.99 a month, or about what industry leader Netflix ( NFLX) charges.
The question going forward? Just how big is aggregate demand? With Apple ( AAPL)  and Amazon ( AMZN)  already competing, and with Comcast ( CMCSA)  and AT&T ( T)  on the way? Netflix already has 167 million subscribers, so that's where we start. Netflix is also the only name here unable to subsidize operating losses through cash flow earned elsewhere.
On that note, Iger had previously expressed his view that Disney+ will not turn profitable until the year 2024. Iger did not adjust that view last night. 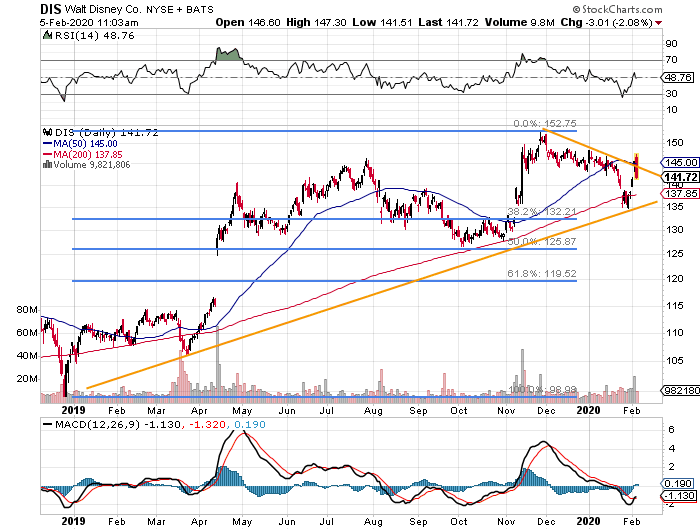 What I see, at least recently, is a narrowing "pennant," highlighted by higher trading volume both at the front end in early November, as well as at the more recent end, or the narrowing. To me, this signals a coming breakout, that would normally signal a continuation of trend. In this case, the trend is higher. That said, while technical analysis is great, it just does not account for park closing due to the coronavirus, or what that could do to the lodgings, cruise ship business, or even domestic parks or box office as folks get scared, or the virus spreads further globally.
That same negative factor would also serve to accelerate to growth of the streaming services, so there is a lot of unknowns here. I have stated in recent media appearances that I would like to grab these shares at close to the $135 level, where there has been some recent support, should I be lucky enough to see that pitch again.
Having seen the shares fail at the 50-day simple moving average already on Wednesday morning, traders will now look to the 200-day SMA for immediate support. I will most likely break price and pay that $137 for an initial tranche upon that test. If that test does not materialize for me, March 20 $135 puts are currently paying a rough $1.75, and the $130 puts of the same expiration are paying a cool 80 cents. Either I end up with the shares at my price, or at least I'l get paid to swing and miss.
(AAPL, AMZN, DIS, and CMCSA are a holding in Jim Cramer's Action Alerts PLUS member club. Want to be alerted before Jim Cramer buys or sells them? Learn more now.)
Get an email alert each time I write an article for Real Money. Click the "+Follow" next to my byline to this article.
TAGS: Entertainment | Luxury Travel | Investing | Stocks | Digital Entertainment | Stock of the Day