May, by itself, was a great month for U.S. equity markets. April, for that matter, if taken in isolation, was even better. As these two months have passed, a mandated -- and quite necessary -- economic shutdown that had affected each and every state has had a severe negative impact everywhere. As demand dropped to almost nothing for goods and services at both the consumer and business-to-business levels, so did demand for labor. Expectations for U.S. Q2 GDP just keep getting worse. Not to mention projections for second quarter and full-year corporate earnings.

The policy makers have done more than most might have expected, if asked ahead of time. Markets have remained liquid. Cash flow, and the solvency that cash flow creates, has been replaced by debt, a lot of debt from the top all the way to the bottom. While certainly creative, does this prevent a broad and awful economic contraction, or just delay the inevitable? Perhaps, the very best that can be expected would be an economic bottom that appears well above what might have been, even if this somehow stretches out the slope of that recovery in the meantime.

What this economy did not need as pandemic-related economic restrictions have been rolled back in stages across many parts of the country, was an incident that provoked social unrest in some of the very urban centers that had suffered to the greatest degree the impacts of the public health crisis. If deteriorating conditions between the U.S. and China were not enough to rattle a still-fragile economic rebound, now we shoot ourselves in the foot.

Equity markets really did come to the point of "almost" going into "risk off" mode late last week. The Thursday session went from positive to negative as the administration signaled a coming press conference regarding its dissatisfaction with events unfolding in Hong Kong. Friday's session evolved in a far different way than many expected. The president certainly did lay some anger on not only Hong Kong, but on trade, on the spread of the coronavirus and lack of related transparency.

While the president did single out the WHO, he did not talk about ending the Phase One trade deal that the two nations has agreed to in January, and he did not take sanctions anywhere near the level many market-watchers had thought he might. Equity markets breathed a sigh of relief. Though, some of the week's rotation was indeed unwound over the rest of the session, as Information Technology, Biotechs and even Communications stocks found new favor. "Risk on" appeared back in favor. Growth over value. At least for at least the moment.

Coming off a tough weekend, as peaceful protesters -- as well as not so peaceful rioters -- appeared in city after city, equity index futures have traded in both directions quite significantly without making meaningful traction either way. Without sitting down and creating a list, it appears that more than 20 U.S. cities had felt the need to impose public curfews on Sunday evening, as governors deployed more than 5,000 National Guard soldiers to the streets.

Large public retailers have been forced to react to the violence in many cities. Target (TGT) , most notably, had started out closing 32 stores in the Minneapolis area in order to protect employees. By Sunday night, Target had closed 175 locations across the country. In addition, on Sunday night, Walmart (WMT) announced that the firm would take similar action, while Amazon (AMZN) announced the closing of Whole Foods Markets in impacted areas, as well as having to adjust or delay e-commerce deliveries.

Let's at least hope that the violence subsides, that the valid voices of the peaceful protesters are heard, and let's also hope that the lack of social distancing protocols that we see followed on televised newscasts does not lead to a resurgence in the spread of the virus. That would just add insult to injury in already damaged areas. This would also further hamper economic recovery, not to mention a reduced capacity for job creation.

--OPEC. There is now talk about a proposal made by Algeria to bring forward the July 9/10 OPEC and OPEC+ meeting to perhaps this week. Reuters reported on Sunday evening that Russia had no objection to moving forward with this change, as rumors swirled in regards to increased production cuts to be made by the cartel and its allies.

--Moderna (MRNA) will host a virtual "Science Day" June 2 (Tuesday). The firm will update investors on the latest information it has on a number of fronts.

--Cisco Systems (CSCO) will also host a virtual event spanning this Tuesday and Wednesday. Topics will include the firm's role during the current public health crisis, where the firm sees opportunity, and how it is pursuing those ends.

Just who is retaliating to what might be a matter of perspective. In response to the U.S. stating its own intention on Friday to take action against China that itself was a response to a number of key issues including the level of autonomy afforded the city of Hong Kong, the president may not have mentioned trade. Bloomberg News, however, is reporting that Beijing has told state-run companies to halt purchases of certain U.S. agricultural commodities including soybeans and pork.

As the sun just starts to make itself seen in the east this morning, I have to wonder if this somehow impacts in a positive way the effort -- covered on Sunday night at the Wall Street Journal -- that the Semiconductor industry Association is lobbying the administration for some $37B in federal funding.

The funds would subsidize construction of chip factories on U.S. soil, research funding and aid for states that attempt to attract these companies. If there is to be an effort made to repatriate industrial production, such subsidies might just be necessary, as the pandemic has made it clear that there is a point where too much foreign dependence is a clear threat to supply chains across almost all industries. The article cites a proposal made by Intel (INTC) CEO Bob Swan in April to work with the Pentagon to create such a facility. Other U.S. semiconductor names of note would include Advanced Micro Devices (AMD) , Nvidia (NVDA) , Qualcomm (QCOM) , Micron Technology (MU) , and Broadcom (AVGO) . 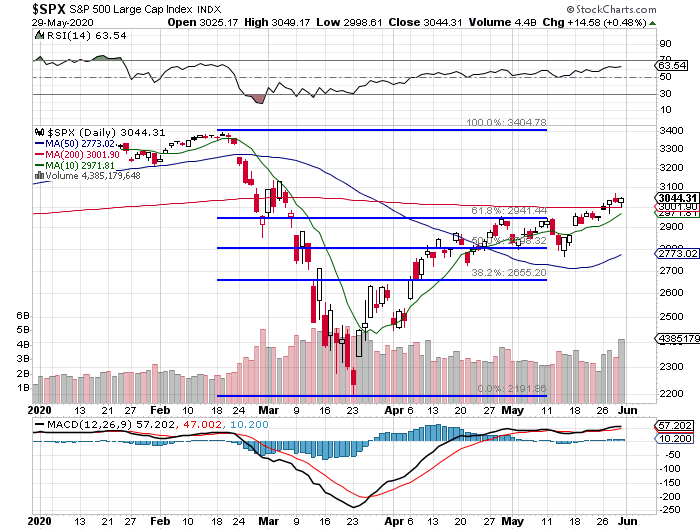 We have, I think, established that markets have now priced in a lot of the "good," and would at this point, be fragile. That in no way means that the rally that equities have enjoyed over not just the past week, but the past two months, cannot continue. Make no mistake, the existing trend remains in place, until it does not. Capital follows capital.

The most important spot for the S&P 500 remains the 3,000 level, as this spot has not only provided recent support, it is also the current resting spot for the 200-day simple moving average. If this cracks, the 10-day SMA becomes key. Not that I often cite the 10-day, but as you can see, the index has not traded below that line in two weeks.

Get an email alert each time I write an article for Real Money. Click the "+Follow" next to my byline to this article.
TAGS: Economy | Investing | Markets | Politics | Stocks | Technical Analysis | Trading | World | U.S. Equity | Coronavirus