Shmunis said RingCentral is not a pandemic story. It was growing steadily before the pandemic and still will be growing after the pandemic. He said companies around the world have legacy telecommunications equipment that needs to be upgraded to the cloud.

Shmunis was pleased to announce Verizon Communications (VZ) as RingCentral's latest partner. RingCentral now has partnerships with three of the top 10 telcos around the globe, he said.

We reviewed the charts of RNG back on Feb. 16 and wrote at that time, "Traders who may be long RNG should raise or enter sell stop protection at $405 now. A near-term rally towards $490 should be considered for some profit taking."

Let's check out the latest charts to seek what we should be doing now.

In this daily bar chart of RNG, below, we see that RNG peaked or topped out around the middle of February. We did not get a rally to $490 and reversed about $40 lower. Our recommended stop loss order would have been elected and traders should have exited. Prices have tumbled lower into March and again into May, but the sell-off does not appear to be over.

RNG is trading below the declining 50-day moving average line and below the cresting 200-day average line. The 50-day line has fallen below the 200-day line for what is commonly called a dead or death cross, which many traders and analysts consider to be a sell signal. The On-Balance-Volume (OBV) line has made a new low for the move down from February and tells me that sellers of RNG have been more aggressive, with heavier volume traded on days when RNG has closed lower. The Moving Average Convergence Divergence (MACD) oscillator is still bearish from its downside crossover in early March.

In this weekly Japanese candlestick chart of RNG, below, we can see a bearish picture. Prices are trading below the cresting 40-week moving average line. RNG is testing the lows of much of last year. The weekly OBV has been drifting lower from early February, telling us of a shift from aggressive buying to aggressive selling. The MACD oscillator is about to cross below the zero line for an outright sell signal.

In this daily Point and Figure chart of RNG, below, we can see the software is projecting a potential downside price target in the $178 area. 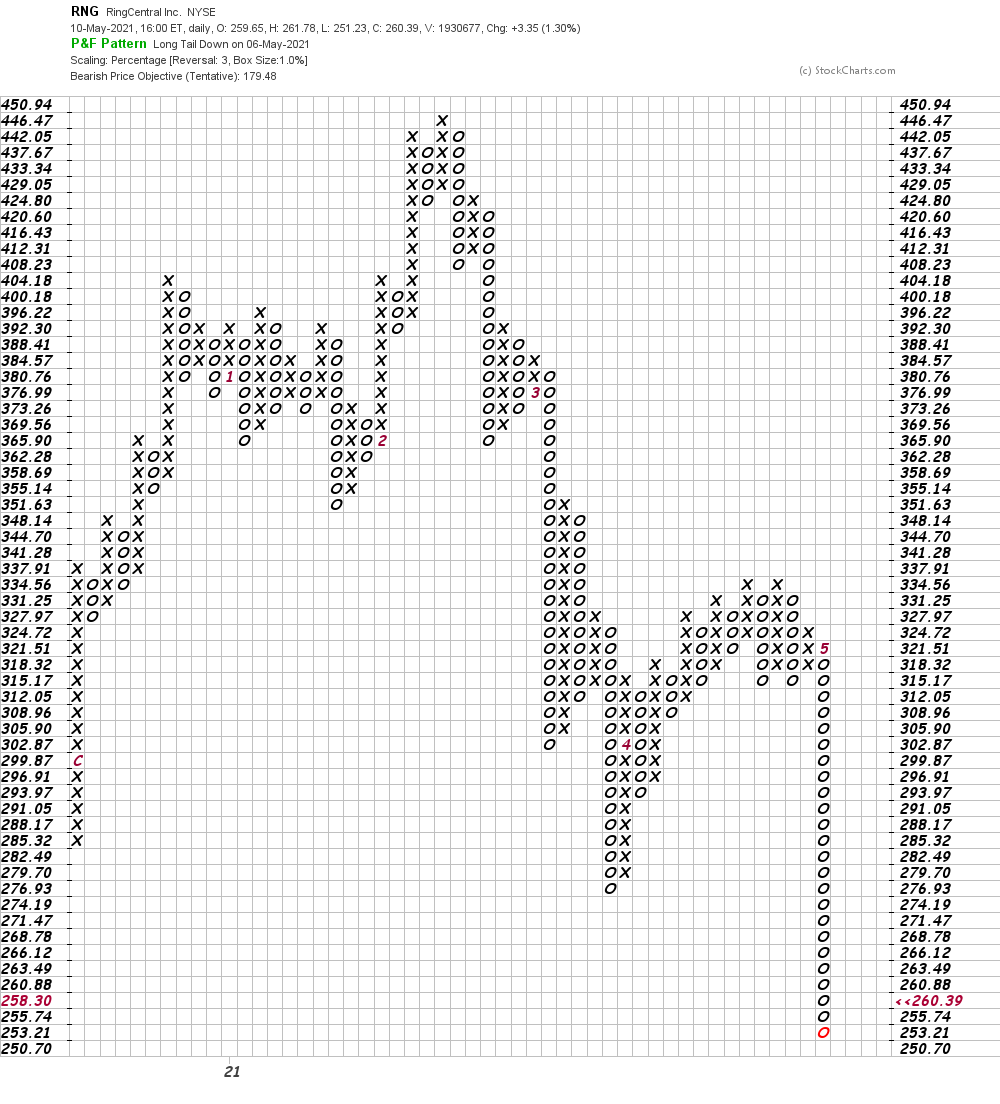 Bottom line strategy: Traders should have gone flat RNG when our recommended sell stop was elected. Avoid the long side for now and don't be in a rush to anticipate a bottom.

Get an email alert each time I write an article for Real Money. Click the "+Follow" next to my byline to this article.
TAGS: Investing | Stocks | Technical Analysis | Software & Services | Business Communications | Mad Money | Executive Interview | Real Money | Telecom Services