Lessons to be learned from a nearly 200-year-old fairy tale? One, even if one plans a method -- namely, breadcrumbs -- meant to find their way home (toward normalization), sometimes the environments change. This change will force one to better understand that environment provided.

The picture in your mind is one of a brother and sister lost in the woods, attracted to a house made of candy -- in our case, perverse global financial conditions induced through experimental or extreme monetary and fiscal policies. The two are captured by an evil witch, and then must cooperate to deceive the witch if they ever want to get back home.

The moral of this story, and I speak to real economic minds who don't seem to understand, is that our breadcrumbs have disappeared, and a new path toward normalization of policies first aimed at promoting growth must be devised. The fact that what is necessary to continue the normalization of monetary conditions would appear to be a reduction in short-term interest rates at a time when the U.S. economy, while not running hot by any means, is outperforming the vast majority of developed or mature economies globally.

As I have explained over and over again, to keep a slowing of growth from turning into a contraction of growth and to maintain confidence across most surveys from dipping to the point where labor markets are impacted due to a real-time shortage of capital expenditure or new orders, repairing the yield curve should have always been Job No. 1. Purchasing managers will not go very far out on any limb if they do not understand current credit conditions, or if the signal sent is one of growth or inflation dying on the vine. Seems to me the vast majority of those arguing against are folks who have never run anything. How could they possibly "get" this?

I want to see a yield curve that works. I don't care how one steepens the curve. Jack the long end. Cut the short end. The environment provided globally prevents juicing the long end, not to mention puts the U.S. dollar at very dangerous levels relatively if not responded to.

Don't believe me on just how important this is?

A reduction in the fed funds rate on July 31 is now fully priced into financial markets -- an expected action that really only erases an obvious error (December) and does not take place for three weeks, though it was signaled at the June Federal Open Market Committee (FOMC) policy meeting. The more dovish sentiment has been seconded by the minutes of that meeting and reinforced by Federal Reserve Chairman Jerome Powell's congressional testimony this week, despite increased job creation for the month of June.

If the central bank were to take action, just what is it supposed to wait for? Bond markets had priced this in. Equities have only been priced at slightly higher than five-year averages, and inflation remains stubbornly below target. Would these "economists" have us wait for a more desirable environment? Perhaps they would rather be forced to reduce rates rather than choose to do so.

Take a look at these two charts. They tell the necessary tale.

This is the 10-year note /3-month Treasury bill spread over the past two weeks. Notice the deep inversion (damage) experienced in response to the robust-looking job creation for June reported by ADP on July 3 and by the Bureau of Labor Statistics on July 5. Notice also how much ground was made up on Wednesday alone as Powell endorsed, rather than reset, expectations for July 31. Now take a look at the not inverted, but still unhealthy spread between the same 10-year note and two-year paper.

Kind of hard to argue with the path that the chairman seems to be on, once one understands how these spreads impact business decision making, and once one bothers to grasp just where foreign investors thirst for yield creates demand for the long end. This is not rocket science, but it does require a certain level of developed thought based upon situational awareness.

Do I know that I am right? No. In fact, no economist you read today knows whether he or she is right. I will tell you this. I think about this all the time, and my perspective is often different, as is my life experience. Does that mean much? I'll let you know later. However, I am not part of their group think.

Now, tape on the foil. It's time to rock.

Oil, that is. Black gold. Odd that on a day that most folks spoke of the future trajectory of monetary policy, that money flow pumped back into the tech sector, and that so many leading equities either approached or obliterated long-watched-for technical levels, that energy stocks would lead the way north.

The Energy Sector Select SPDR ETF (XLE) roared higher, landing up 1.46% for the session. Front-month West Texas Intermediate (WTI) crude futures, which traded into the $56.40s per barrel on Friday, roared to levels just below $61 as the darkness of night melts into the gray that appears just before dawn.

The U.S. Energy Information Administration (EIA) printed weekly oil inventories at -9.5 million barrels domestically versus expectations of between -2 million and -3 million barrels, depending on who you read, with an assist from Jerome Powell who talked down U.S. dollar valuations.

Then this: The British Defense Ministry reports that several Iranian ships made attempts to impede a U.K.-flagged vessel in the Straits of Hormuz. Fortunately, the Royal Navy had a frigate, HMS Montrose, in the region, and that ship was able to force the Iranian ships to back off.

The obvious attempt here is to impede commerce through the area, and indeed the action did succeed as far as that aim is concerned. The original vessel, the British Heritage, is a tanker run by BP (BP) . BP has halted that ship from operating in the Persian Gulf. Remember that a U.K. military unit commandeered an Iranian ship last week off of the big rock, Gibraltar. The Iranian ship in question was carrying oil and was believed to be headed for Syria.

Iran's Revolutionary Guard remains a threat to commerce in the region. The ETF mentioned above stands just below its 200-day simple moving average (SMA) after just barely kissing that level on Wednesday. 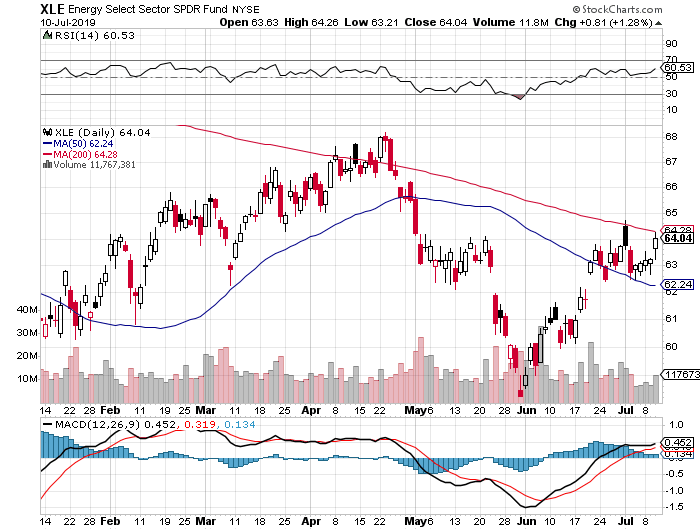 While a stock such as BP stands at a very similar-looking spot on its chart, the two largest holdings in this ETF in terms of weighting are Exxon Mobil (XOM) and Chevron (CVX) . Each of these companies comprises more than 20% of the fund. This thing takes that line, and finds support? Both of those stocks will move in kind, although both have already taken that spot individually. Don't be surprised if an underperforming oil services name such as Schlumberger (SLB) , weighted at just less than 5% of the fund and that still is trading well below that 200-day SMA, makes a move toward the $43 level (last: $40.62) if this whole ball of wax comes to fruition.

Know what my best-performing name is this week? Amazon (AMZN) .

What, Sarge? You told us that you puked the name prematurely when your $1,800 panic point had been breached back in late May. Truth, my friends. Truth. I have not held an equity stake in the name since. Wanted to grab some on the way up. Has not been a dip to my liking since. Then, how the..? Let me explain.

Once trend became apparent, I have made a daily habit of day trading Amazon weekly options, going home flat every single night while never going out on expiration beyond the coming Friday. Limited risk, just as much volatility as the equity.

Oh, and the adrenaline rush. Hoooo, doggie, this is the most fun I have had trading short term in a very long time.

The rules? No naked selling of anything.

Ever realize about three seconds into a fist fight that the other guy has a clue? Naked selling calls and puts in a name such as Amazon is how you run into that guy again.

Know your risk tolerance. Premium paid should be in line with that. Go home flat. Even at a loss for the day. Again, that's how you meet the tough guys again.

The other rules remain similar to trading an equity. Limit losses to 8% (unless it's late in the wee, and the premium has become too small to worry about.) However, whereas we will originally target, say, a 20% to 25% move off of pivot with an equity, the sky is the limit with a long position in a call or a put in AMZN. You puke the position when the worm turns. Then, do it again if the daily moving average convergence divergence (MACD) gives you some daylight on a beneficial crossover. 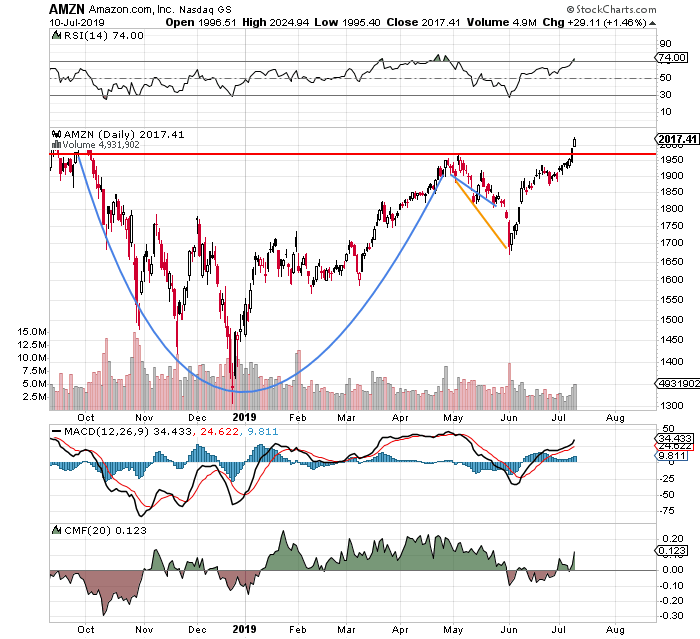 See the breakout from pivot this week? A thing of beauty.

Target price of $2,400? Do you see any reason why not? Perhaps the legal challenge presented by Oracle (ORCL) in regards to the ongoing battle between Amazon and Microsoft (MSFT) for the potential $10 billion Defense Department program known as JEDI (Joint Enterprise Defense Infrastructure) does create some headline risk. Acknowledged. However, you may have also noticed that Amazon, which is part of Jim Cramer's Action Alerts PLUS charitable trust, has teamed up with Lady Gaga to launch a line of beauty products. If you did, then you likely noticed that Ulta Beauty ULTA has not participated in this week's rally?

Would that be a result of pending intervention by the "death star" or simply a part of overall weakness experienced across the retail space? That has not seemed to bother Walmart WMT. Then again, not everyone finds as much as $10 billion under their pillow when they lose a tooth. That's what Walmart may have in Flipkart (India) digital payments subsidiary Phone PE. Oh, have I told you lately... to... rock on.

Get an email alert each time I write an article for Real Money. Click the "+Follow" next to my byline to this article.
TAGS: Bonds | Federal Reserve | Fixed income | Investing | Oil | Options | Stocks | Energy | Technology | E-Commerce | Middle East | Real Money