They say numbers don't lie, but Walmart's (WMT) strong sales reported in its fourth quarter earnings, disclosed in pre-market trading on Tuesday, are stoking skepticism on the Street with regard to U.S. Census Bureau retail sales stats.

Walmart's stock surged in trading after the earnings report, bolstered largely by blowout sales in holiday shopping that was headlined by 43% year over year e-commerce sales growth. These trends from the world's largest retailer raise questions of the recent retail sales reports from the U.S. Census Bureau that would have made this report seem improbable. 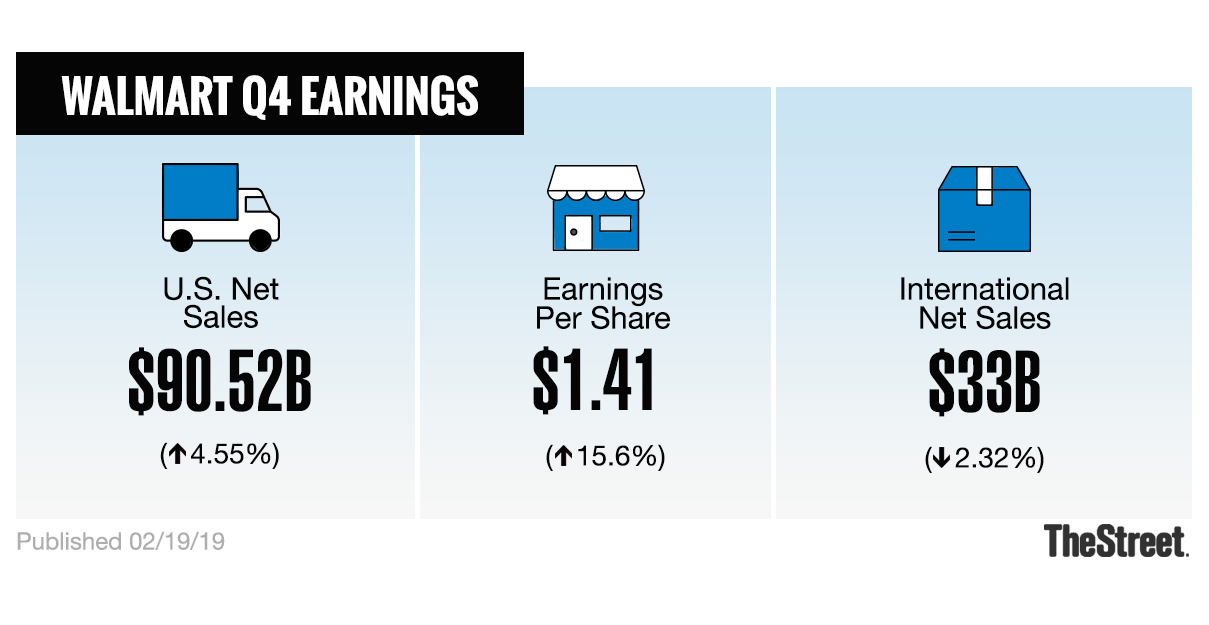 On Thursday, the Census Bureau reported that retail and food-services sales declined 1.2% in December to $505.8 billion, in stark contrast to the 0.1% growth expected by analysts.

The e-commerce segment observed by the government department also marked a 3.9% decline, the largest month to month decline in a decade.

"The bottom line on this data release is that it is truly dreadful pretty much across the board," Ward McCarthy, chief financial economist at Jefferies, wrote after the release. "Taken literally, this data release would indicate that the consumer sector collapsed in December."

That print was a promoter of pessimism on major retailers like Walmart, as could be expected.

Yet, McCarthy remained skeptical given reports from individual retailers to that point.

"This release is such an outlier and so incongruous with the general trend in consumer spending, holiday consumer sales reports and holiday seasons consumer credit data, that it does raise suspicions of data reliability," McCarthy added.

He suggested that there needs to be a revision as most of the data, like that of Mastercard SpendingPulse, showed strong holiday sales that simply don't jive with the government figures.

The survey conducted by the payments provider indicated holiday sales increased 5.1% to more than $850 billion in the holiday season from Thanksgiving to Christmas and saw online shopping gain 19.1% compared to 2017.

The National Retail Federation, which tracks the sector independently, was also incredulous and suggested the need for revision.

"[Thursday's] numbers are truly a surprise and in contradiction to the consumer spending trends we were seeing, especially after such strong October and November spending," Chief economist Jack Kleinhenz said. "This is an incomplete story and we will be in a better position to judge the reliability of the results when the government revises its 2018 data in the coming months."

Of course, White House economic adviser Larry Kudlow added suspicion to upcoming revised numbers, suggesting the numbers were a "glitch" due to the government shutdown.

Walmart seems to be fueling further questions, as its take on consumer trends is largely bullish.

"In the consumer, I think still feels pretty good to us," CFO Brett Biggs told analysts on the conference call. "There's you see all the numbers that we see wages are still pretty good, unemployment rates low, gas prices are down year-on-year. So, there's a number of things I think are still working in favor of the consumer."

The company was specifically bolstered by strong growth in e-commerce which grew over 40% year over year. The company is projecting a further 35% growth in its next fiscal quarter, eschewing thoughts of a slowdown in consumer's digital spend in executives' mind apparently.

"It's certainly possible that both could be true," Kniffen acknowledged in terms of Walmart's read through to national sales contrasting with government reports, "but I find that chance remote."

He added that the government shutdown could have created some problems in the reporting of data and will likely call for a revision, echoing the economists scratching their heads at the contrast.

Given the skepticism and the glitch comments from the government itself, many are questioning whether the numbers reported on Thursday were lies, damn lies, or just tricky, but true, statistics.

Some clarity on the issue in coming weeks could be a key catalyst for the sector at large in 2019.

Get an email alert each time I write an article for Real Money. Click the "+Follow" next to my byline to this article.
TAGS: Earnings | Economic Data | Federal Reserve | Investing | Stocks | Retail | United States | Consumer Discretionary | Stock of the Day