ResMed made a huge pivot earlier in the year to aid in the fight against Covid-19. The company increased its ventilator production by 350%, Farrell said, making and distributing over 150,000 units around the globe. While production continues, ResMed is now slowly returning to its core markets combating sleep apnea, COPD and asthma.

Farrell said the pandemic has helped raise awareness for the importance of respiratory health. It has also shown the world the importance of digital solutions that can provide care outside of traditional hospital settings.

Let's check on the health of RMD's charts.

In the daily bar chart of RMD, below, we can see the price action of the past 12 months. The shares have rallied since the March nadir around $110. In fact we can see that prices have doubled in just a few months and reached $220 this month. RMD has been pulling back recently but remains above the rising 50-day moving average line and the rising 200-day moving average line.

There have been a number of upside breakouts on the stock but the trading volume does not seem to expand. The On-Balance-Volume (OBV) line shows a rise from March but it seems to be lagging the gains in price. The Moving Average Convergence Divergence (MACD) oscillator has crossed to the downside for a take profits sell signal.

In this weekly bar chart of RMD, below, we can see a positive looking longer-term picture. Prices have been in a sustained uptrend the past three years. The February-March decline of this year looks less worrisome on this chart. Prices are above the rising 40-week moving average line.

The weekly OBV line has been strong the past two years and confirms the uptrend. The MACD oscillator on this time frame just turned up for a fresh outright buy signal.

In this daily Point and Figure chart of RMD, below, we can see a nearby $200 downside price target. 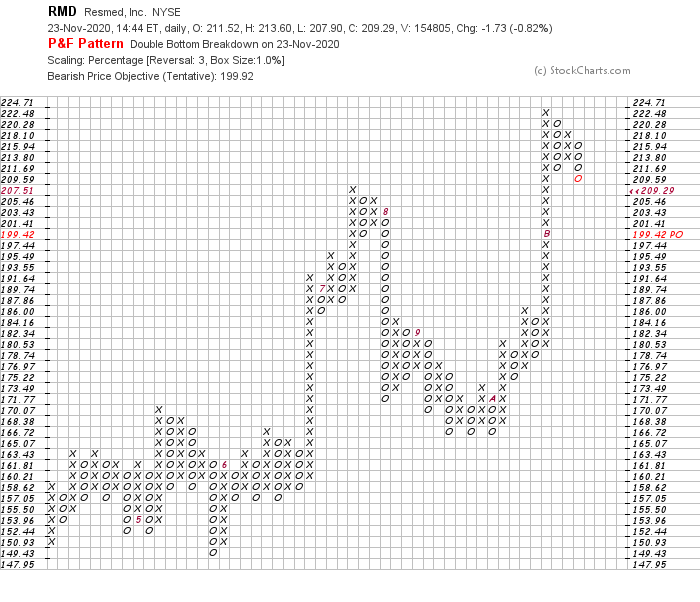 In this weekly Point and Figure chart of RMD, below, we can see a potential price objective in the $335 area. 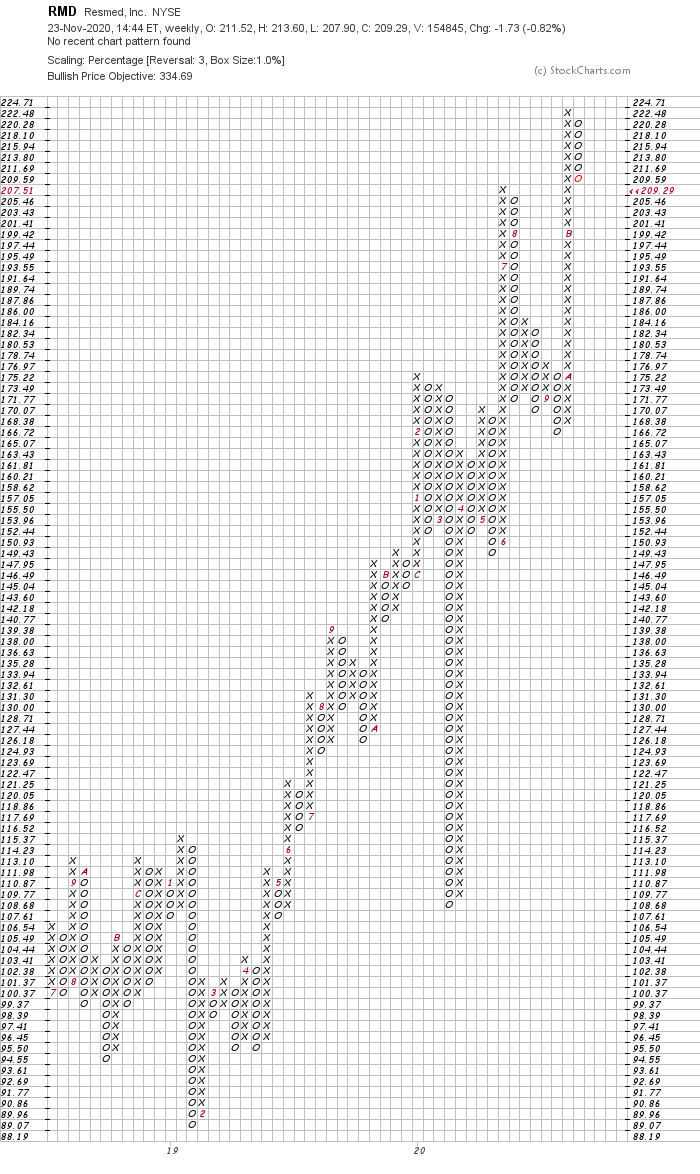 Bottom-line strategy: In the short-run it looks like RMD can correct lower to the $200 and maybe even $190 but longer term the uptrend does not appear over and gains to the $300 or even $335 area are possible. Look to be a buyer of RMD after a correction. Risk a close below $180.

Get an email alert each time I write an article for Real Money. Click the "+Follow" next to my byline to this article.
TAGS: Investing | Stocks | Technical Analysis | Health Care Equipment & Services | Technology | Mad Money | Executive Interview