Resilience? Is that what it's called?

The major large-cap indices all rallied back from lows created about an hour into Monday's regular trading session. The rally kept on keeping on right up until the closing bell.

The Dow Jones Industrials closed at a record high for the 35th time in 2021. Yawn. The S&P 500 set for that index, a 49th record close of just this year. More yawning. Aggregate trading volume actually increased significantly from Friday for NYSE-listed names. Still quite thin, mind you. Trading volume moved sideways for Nasdaq-listed names.

Traders digested the utter and absolutely humiliating collapse of U.S.-backed forces in Afghanistan, a presidential speech that was put off until after the closing bell, which did not matter to anyone, and a plethora of weaker-than-expected Chinese macroeconomic data points illustrating the extent of the impact of Covid's Delta variant upon the world's second-largest economy, and most important supplier to Planet Earth's other key economies.

Then there was the Empire State Manufacturing Index, the first regional look at the state of the U.S. manufacturing base for the month of August. The headline number disappointed, while remaining expansionary. New Orders, Shipments, Number of Employees, and Average Workweeks all showed signs of slower growth. However, Prices Paid and Prices Received remained on the same aggressively upward-bound trajectory as in July. Harbinger of stagflation? Duh.

The U.S. Treasury yield curve seems to think so. Bond traders continue to plow into the long end of the curve. As the wee hours pass early on Tuesday morning, I see the U.S. 30-Year Bond giving up just 1.89%, while the 10-Year Note pays 1.22%. These yields are down from 2.01% and 1.38% (respectively) as recently as last Thursday.

Don't You just love hearing an anchor from anywhere read their business segment, and ignorantly spew out how the major indices made new highs, while the "tech-heavy" Nasdaq Composite closed -0.2%. No mention that the "tech-heavier" Nasdaq 100 closed just slightly in the green. No mention that the strength in Monday's equity marketplace was almost strictly limited to defensive-style sectors. Health Care, Utilities and Staples led the way. Cyclicals, such as Financials, Discretionaries, Materials, and Energy all sold off. Stagflation? Duh.

The Technology sector select SPDR ETF (XLK) , for that matter, finished the day in fourth place, up 0.45%, but this was not a broad story of some kind of rally into tech. Apple (AAPL) rallied 2% in an attempt to break out from established resistance at $150. Microsoft (MSFT) also explored new heights. Inside the sector, however, the Dow Jones U.S. Software Index closed slightly lower, while the Philadelphia Semiconductor Index surrendered 0.4%.

You do need to check out the action in Nvidia (NVDA) on Monday. Take a look at this: 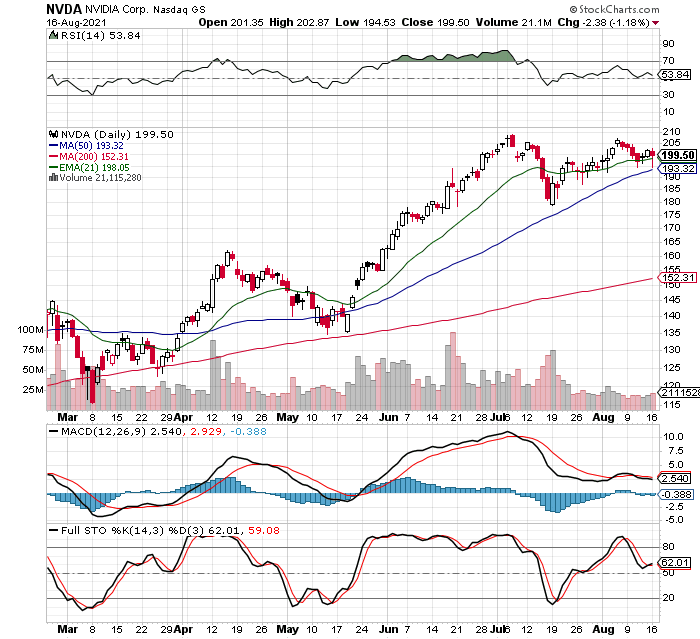 It's not quite developed as of yet, but readers will see that on Monday, NVDA rebounded sharply off of its own 50-day simple moving average (SMA), and in the process, retook its 21-day exponential moving average (EMA). The stock's indicators appear sort of neutral right now.

Relative Strength and the Full Stochastics Oscillator both appear non-committal. This, while the daily Moving Average Convergence Divergence (MACD) might present a 12-day EMA and 26-day EMA that currently wrestle for control, but against the backdrop of a 9-day EMA that has not only gone negative, but has been negative (mostly) since the beginning of July.

I think NVDA will test at least that 21-day line again and perhaps the 50-day line once again, but we also have a potential ascending triangle in the making... and that my friends would be bullish. Since you were about to ask, I am still flat this name. For now.

For all the talk of resistance, equity markets were a hollow shell of ugliness on Monday. Losers beat winners by almost two to one at the NYSE, and by almost five to two at the Nasdaq. Declining volume crushed advancing volume quite decisively at both exchanges as well, while new lows beat new highs by more than five to two at the Nasdaq -- with the Composite less than a percent away from an all-time high. Seems legit. Who's down for an evening of Jenga? I'll buy the pizza.

On that note, the S&P 500 has now gone nine months without a 5% correction. No, we are not close to an all-time record there (19 months: June 2016 through January 2018), and there is this wall of liquidity that seems to absorb every dip. There are also enough reasons to be ever vigilant as we traverse a more than uncertain economic, monetary, fiscal, political, geo-political, and public health landscape.

Other than that, I don't see much to worry about.

Last week, Minneapolis Fed President Neel Kashkari, who is not a voting member of the FOMC this year, told Bloomberg News: "If we see a few more jobs reports like the one we just got, then I feel comfortable saying yeah, we are - maybe haven't filled the hole that we've been in - but we've made a lot of progress, and now, then will be the time to start tapering our asset purchases."

Never mind the slight incoherence. That happens to all of us, when we are quoted publicly, word for word. Never mind the fact that after removing the seasonal adjustment U.S. job creation actually contracted in July. Nobody is willing to hear that.

The fact is that July was seen as a strong month for labor, and Kashkari needs to see more of those, before supporting any tapering of the $80B per month in Treasury purchases and $40B in mortgage-backed securities. (Oh, and never mind the fact that we are more than half a year late on removing MBS purchases from the program, and that prolonging that adjustment retards the natural development of multiple generations of U.S. households.)

The Minutes from the FOMC policy meeting of July 27-28 will not be released until Wednesday afternoon. Regardless, news has been broken at multiple sources (I read it at the WSJ, I heard it at CNBC) that several Fed officials are advocating for the termination of the entire asset purchase program by the middle of 2022, which means that if they are going to taper, they had better get on their horse soon and ride fairly hard. This plays very well into the narrative that such a tapering will at least signaled next week at Jackson Hole, and seriously debated at the Sept. 21-22 policy meeting, especially if the August employment situation appears strong.

In recent days, both Boston Fed President Eric Rosengren (not an idealogue) and Dallas Fed President Robert Kaplan (quite pragmatic), neither of whom vote on policy this year, have opined in such a way as to sound cautiously hawkish. With Kansas City's perma-hawk Esther George and Cleveland's more hawkish than most (and whose opinion I respect greatly) Loretta Mester both on the sidelines for 2021, I just don't see the Fed moving very aggressively very quickly. My thinking is that we talk about this for a couple of months unless there is an upside inflationary shock far worse than anything we have seen to date.

Next year, Cleveland (Mester), Kansas City (George), St. Louis (James Bullard), and Boston (Rosengren) replace Richmond (Thomas Barkin), Atlanta (Raphael Bostic), San Francisco (Mary Daly), and Chicago (Charles Evans) at the policy table. For those readers who do not follow the Fed all that closely, that is one heck of a hawkish turn in personality for the Committee. I mean, ONE HECK of a turn.

On Thursday, The FDA authorized Covid-19 booster shots for the immunocompromised. On Friday, the CDC got on board.

On Monday, we learned that Pfizer (PFE) and BioNTech (BNTX) had submitted their joint application to provide these "booster" shots to the general public. As "we think" we now know, immunity wanes over time after being fully vaccinated, and it is believed that the Delta variant more easily than past variants finds a way around this weakened immunity.

The Biden administration is expected to announce later this week that Americans who have been fully vaccinated should receive such a jab to ensure continued protection. This is why there are extra slots on that card you were issued by the CDC. The expectation is that the strategy will be to boost folks eight months after originally being "fully" vaccinated.

Moderna (MRNA) for its part is expected to submit such an application sometime next month, while Johnson & Johnson (JNJ) is expected to at least release data concerning the efficacy of a second shot of that company's single-shot vaccine.

2) Palantir Technologies (PLTR) , in addition to announcing that the company had expanded its portfolio of investments in companies going public via SPAC to more than $300M, also announced the acquisition of $50.7M in gold bars. We like gold here, and we like PLTR.

3) Berkshire Hathaway (BRK.A) , (BRK.B) apparently added to its long position in Kroger (KR) , while trimming holdings in General Motors (GM) , Chevron (CVX) , AbbVie (ABBV) , Merck (MRK) , and Bristol-Myers Squibb (BMY) . It is here where Sarge reiterates his buy rating on ABBV and his price target of $142.

Get an email alert each time I write an article for Real Money. Click the "+Follow" next to my byline to this article.
TAGS: Earnings | Economic Data | Federal Reserve | Futures | Indexes | Investing | Markets | Stocks | Trading | Treasury Bonds | U.S. Equity