Let me tell you a little story about a man I have never met. A number of years ago I read in a magazine article a tale of extraordinary heroism displayed by one man and thought to myself just how many true heroes die far away from any fanfare, committing incredible acts of selfless service that can only come from a deep well of personal courage. I remember thinking I can't possibly learn of every instance where one gave all for another, but I can make sure I never forget the name of U.S. Marine Corps Second Lieutenant Mike Thomas. Longtime readers have read this name before.

Lt. Thomas, a resident of small-town Pawnee, Oklahoma, was born in January 1943. Twenty-five years later, Thomas would find himself in the unfortunate position of being a small unit leader at the Khe Sanh combat base in Quang Tri Province, South Vietnam.

As mid-January faded into late January 1968, the base came under regular mortar and rocket fire. The base was under the siege of a greatly superior numerical force. Lt. Thomas's unit had been hit particularly hard on Jan. 20, 1968.

We like to make fun of second lieutenants because they are usually inexperienced. Nobody is making fun of this second lieutenant. Thomas exposed himself to danger by carrying six wounded Marines to safety on his back, one by one. Some folks might have considered that to be enough. Thomas went back to look for two more Marines he knew were out there, somewhere. Thomas never came back.

I have no personal connection to Lt. Mike Thomas, other than a feeling of respect, admiration and quiet awe. I do not know his family. I am sure they wept. I am sure they weep still. I can only imagine that a posthumous award of the Navy Cross for extraordinary heroism is little consolation for an empty hole in a parent's heart, a sibling's heart that now spans more than a half century.

In connection to large, catastrophic events, we often use the term "Never Forget." Then we manage to go about our business. Sometimes, Hell visits a very small place in the middle of nowhere and one will rise above natural fear out of love. One comes home in a box so that six others might not. There are perhaps thousands of silent heroes out there. Find one. Remember them for life. Pray for a family that suffers. Forever.

The name of Michael H. Thomas, 2LT USMC, can be found at the Vietnam Veterans Memorial in Washington, D.C. Panel 34E, Line 92, among 58,317 of his brothers and sisters.

One can expect equity markets to trade rather quietly on Monday. As we have discussed time and again, the performance of the S&P 500 has been very closely correlated in a broad sense to the steepening of the Treasury yield curve, and in a more specific way the spread between the yields of the three month T-bill and the 10-year note. Bond markets are closed on this day, a federal holiday, meaning that the dog will have to wag its own tail without any guidance except from abroad. There will be lesser participation. Global markets have sold off a bit ahead of the U.S. opening, pushing US equity index futures lower. This day most likely will be one of risk management more than one of overt aggression. Don't get shaken out of core beliefs.

To be truthful, a number of participants took off on Friday afternoon. Friday trading volumes were well below Thursday's levels and easily beneath what had become a seven-session stretch of above-average trading volumes for large-caps. What I am trying to say is that both the S&P 500 and the Nasdaq Composite come into the new week bordering on a condition of being technically overbought.

Of course, the hopeful prospect of a "Phase One" trade deal between the U.S. and China is the impetus behind recent equity strength. Of course, this optimism has been tempered somewhat since last week as President Trump indicated on Friday that he had not yet agreed to roll back tariffs on Chinese goods. This was followed by weekend violence in Hong Kong as protests continue.

The hopeful optimism around trade has led investors toward the idea that perhaps global economic growth might have slowed as much as it is going to, for now. That is why there has been such a profound selloff at the longer end of the U.S. (and global) yield curve. Indeed, as U.S. Treasury markets pause we can look at that curve without the numbers changing in real time.

The curve is very close to being un-inverted in its entirety. Not only do we have U.S./China trade to thank for this much healthier-looking curve, but also a Federal Reserve that suddenly understood how important it was to repair this curve after not seeing what was necessary for so long. It cannot be overstated just how key it is that the Federal Open Market Committee (FOMC) is anchoring short-term rates while allowing the bond market to control the long end.

For those keeping score, the 30-day T-bill remains inverted against the 90-day, but that's it. From 90 days through 30 years, everything is in the right spot -- it just has to steepen.

Am I dreaming? Perhaps I am, and why shouldn't I? Imagine a world where credit has a price that improves for lenders over time. Imagine a world where borrowers and lenders alike might properly develop an ability to assess their own risk. Imagine a credit market representative of both healthy demand as well as healthy supply. Imagine, one day, a credit market solely reliant upon fundamentals.

OK, maybe I am dreaming. That said, should we not aspire to greatness?

Third-quarter earnings season is now down to the nitty-gritty, meaning 89% of the S&P 500 has reported. There are now just a few stragglers out there, many of them retailers. According to FactSet, over the past week the blended rate for third-quarter earnings "growth" has improved to -2.4% from -2.7%, while the S&P 500 now trades at a forward-looking price-to-earnings (P/E) ratio of 17.4x. That's up from 17.2x in just one week.

The potentially scariest takeaway from this week's FactSet Earnings Insight would be the sudden drop in earnings expectations for the fourth quarter. In just one week, those expectations for the S&P 500 have gone from -0.4% to -1.1% year over year. The revision to fourth-quarter projected earnings growth in turn takes expectations for calendar year 2019 in its entirety down to 0.1% from last week's 0.3%. The numbers still look pretty good beyond that, but don't they always?

There's plenty more of interest in that report.

Even with a reduced outlook for profitability, the optimism in the marketplace created by the Fed's posture as well as hope over trade has forced a continued rotation in equities out of the perceived safety of defense (not to be confused with defense and aerospace) and into more cyclical-type sectors. Though third-quarter earnings growth has been most robust for utilities above all other sectors, we have witnessed that sector's aggregate forward P/E ratio drop from 19.9x to 19.4x over the same five-day period. Still over the same week, the energy sector as a group has soared from an "undervalued" 16.7x to an "in line with the index" 17.4x. Financials (12.9x), industrials (16.9x) and materials (17.9x) all made similar increases in aggregate equity valuation.

As I went through my Sunday night chart work, two charts of names I am not currently in struck me -- namely, the charts of Costco Wholesale (COST) and Viacom (VIAB) , for different reasons. 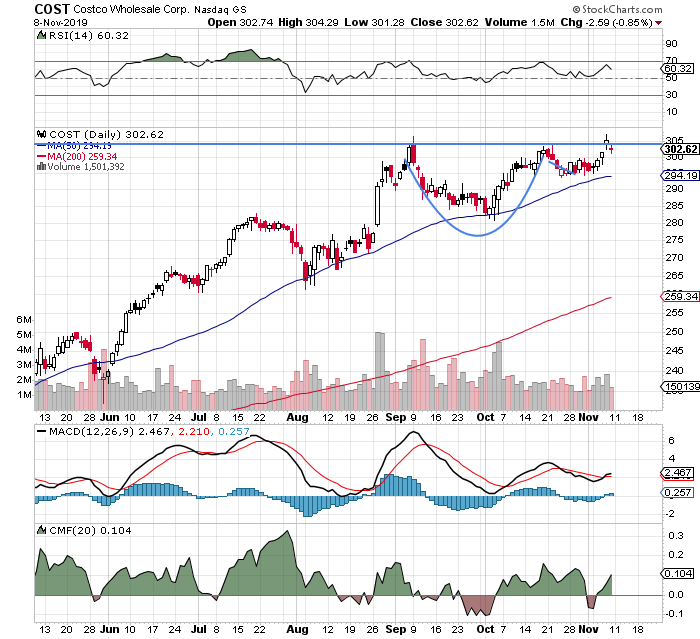 Do we see a saucer with handle with COST? I thought so for a minute, then noticed the increased trading volume at the trough of the depression that came back with the earnings release in early October. However, we are left with a cup with handle. That still bullish, if the pivot just under the $305 level can be taken. That spot proved to be resistance on Friday as these shares sold off. Money flow, Relative Strength and the daily moving average convergence divergence (MACD) all look good.

My thought? I would rather buy these shares above $305 after seeing support at pivot than so close to $305 with that level as resistance. Cheaper vs. more expensive? Not about that. It is about understanding whether a level is going to help you or hurt you before digging in. 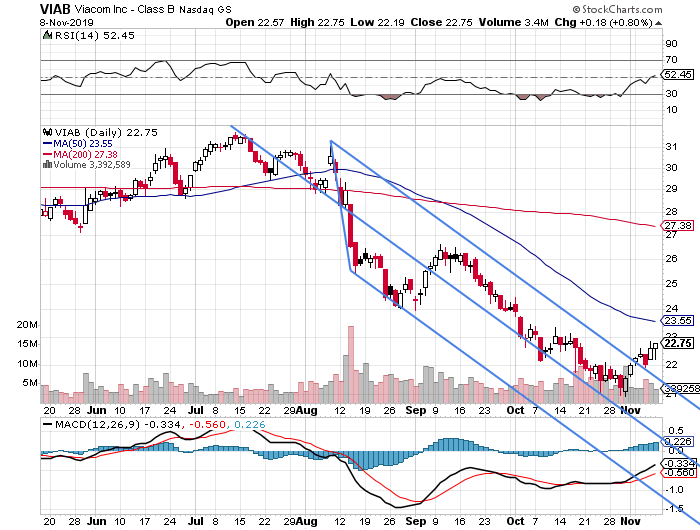 Viacom is sure perplexing. I mean, broadcast and cable TV is obviously in decline, but this name is cheap. Dirt cheap. Viacom also reports on Thursday morning, adding some spice to this name.

You'll notice how punished these shares have been over three months. You'll also notice that while the shares have broken out of my Pitchfork, they still stand well below their own 50-day simple moving average (SMA) of $23.55.

You'll notice that Relative Strength and the daily MACD are both off of the floor. The stock trades at just 5x forward earnings. That can often be seen as cheap, or it can be seen as trouble going forward. After reading Jack Hough's piece in Barron's this weekend where Viacom and free cash flow were both mentioned, I took a look at the firm's financial tables. For the nine months of fiscal 2019 already reported by Viacom, it has reported $984 million of free cash flow on revenue of $9.405 billion. That's 10.5% for the mathematically challenged. The ratio remained close to intact for the most recent quarter reported in August, making Thursday's full-year numbers very interesting.

Get an email alert each time I write an article for Real Money. Click the "+Follow" next to my byline to this article.
TAGS: Earnings | Federal Reserve | Interest Rates | Investing | Stocks | Technical Analysis | Treasury Bonds | Media | Retail | Real Money