Alphabet (GOOGL) stock is slumping on Monday as regulation risks appear to be bubbling up irrespective of region.

Shares of the Mountain View, California-based search and technology giant slipped over 6% on Monday morning, marking their lowest level since early January. The stock has declined over $100 in the last week.

"Antitrust investigations are difficult to predict," Bank of America analyst Justin Post acknowledged in a note to clients. "If the DOJ moves ahead, an investigation would likely embolden critics of Facebook (FB) , Amazon (AMZN) and other tech giants as well, causing rhetoric to could heat up during the 2020 election year."

With Alphabet being the focal point at present, it could certainly receive the lion's share of criticism and court cries to break up the company from both sides of the aisle in a tense political environment.

Post noted that previous investigations, specifically by the FTC, have not yielded such results. However, he added that "the current climate is somewhat different."

"Potential implications for Google could include new regulations on business practices, or an antitrust probe leading to a breakup," he advised. "To break up Google, the DOJ would likely have to file a lawsuit and convince judges that Google has undermined competition. It is very rare to break up a company but not unheard of, with Standard Oil and AT&T (T) as past examples, though the government tried to break up Microsoft (MSFT) and failed. Antitrust probes can also result in an agreement to change certain business practices."

While the process remains fluid, the market appears extremely anxious over the potentially dire implications.

As a global company, Alphabet must consider actions beyond U.S. soil as well.

Most prominently, Chinese regulators are reportedly mulling an "Unreliable Entities" list in retaliation for the ban on Huawei products in the U.S.

"Foreign enterprises, organizations and individuals that do not comply with market rules, violate the spirit of contract, block or cut supplies to Chinese firms with non-commercial purposes, and seriously damage the legitimate rights and interests of Chinese enterprises, will be added to the list of unreliable entities," Commerce Ministry spokesman Gao Feng said Friday.

Apple (AAPL) and Alphabet are assumed to be atop the country's targets in the trade-war tit for tat by many market watchers.

Google currently offers flagship services such as Gmail, YouTube, and Maps in the region, while offering Android services to the nation's largest phone makers like the aforementioned Huawei and Xiaomi (XIACF) . Its search engine is not available in China as Baidu (BIDU) instead dominates.

The company received a small reprieve for these services to Huawei from the Department of Commerce in late May, as the agency allowed for a 90-day moratorium on full bans in order to give U.S. companies time to figure out longer-term workarounds and mitigation strategies.

"Keeping phones up to date and secure is in everyone's best interests and this temporary license allows us to continue to provide software updates and security patches to existing models for the next 90 days," a Google spokesperson said in a statement to CNBC.

The license expires on Aug. 19 and a plan for action following the expiration remains unclear at this time.

China has been a hot-button issue for the firm in recent years, mainly centered on its rumored re-release of a China-based search engine after withdrawing amid censorship concerns in 2010.

An initial report in late 2018 from The Intercept warned that a launch was imminent.

CEO Sundar Pichai sidestepped the topic in recent earnings calls, noting a desire to address the massive addressable market, but not directly confirming a relaunch of Google search there.

"On China, we obviously, we deeply care about serving Chinese users, we've been investing for many years and especially from developing Android," he responded. "We are constantly looking for ways by which we can better serve Chinese users and that's where we are today."

"We are compelled by our mission [to] provide information to everyone, and [China is] 20% of the world's population," Pichai said at a recent Wired conference. "We also follow the rule of law in every country."

Such laws would likely call for heavy censorship of searches. However, that might not even be an issue the company will need to deal with if it is banned in the same fashion that services such as Snapchat (SNAP) and Facebook (FB) already are in the region.

The added issue for Alphabet is the restriction on the tailwind the company was offered in services from the world's most populous market.

Europe has been far from a safe haven amid the tenuous trade talks between the world's largest economies.

The company has dealt with numerous fines from the European Commission in recent years over its alleged abuses of EU privacy laws and regulations as general data breaches. The missteps have led to massive penalties over the years, the largest fines ever levied on a tech company.

The violation of privacy, a politically important issue for the commission, is likely to lessen the bargaining position for Alphabet as it takes on ever-increasing fines.

Keith N. Hynton, William Fairfield Warren Distinguished Professor of Law at Boston University told Real Money in a recent interview that the company is likely due to see increased fines from European regulators given the political popularity of cracking down on big tech. 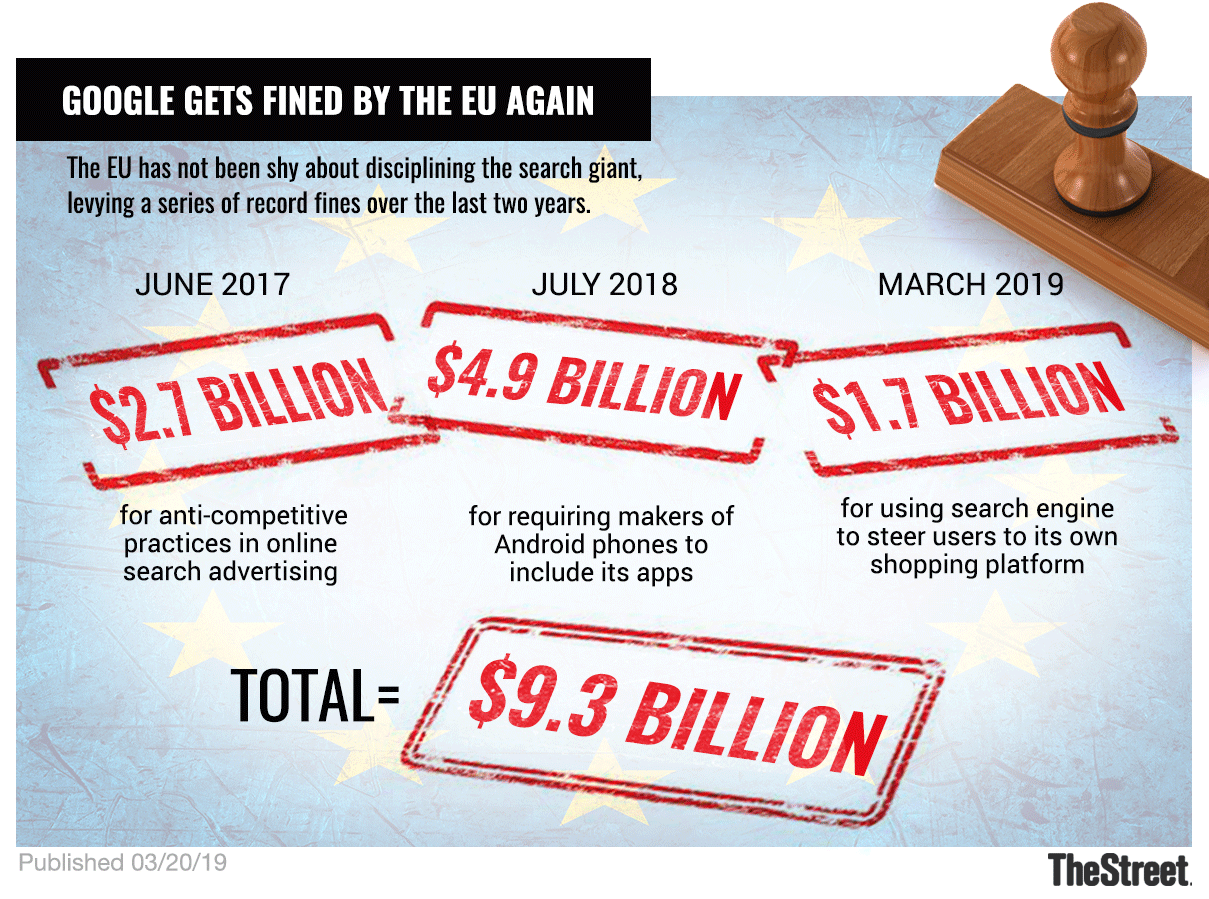 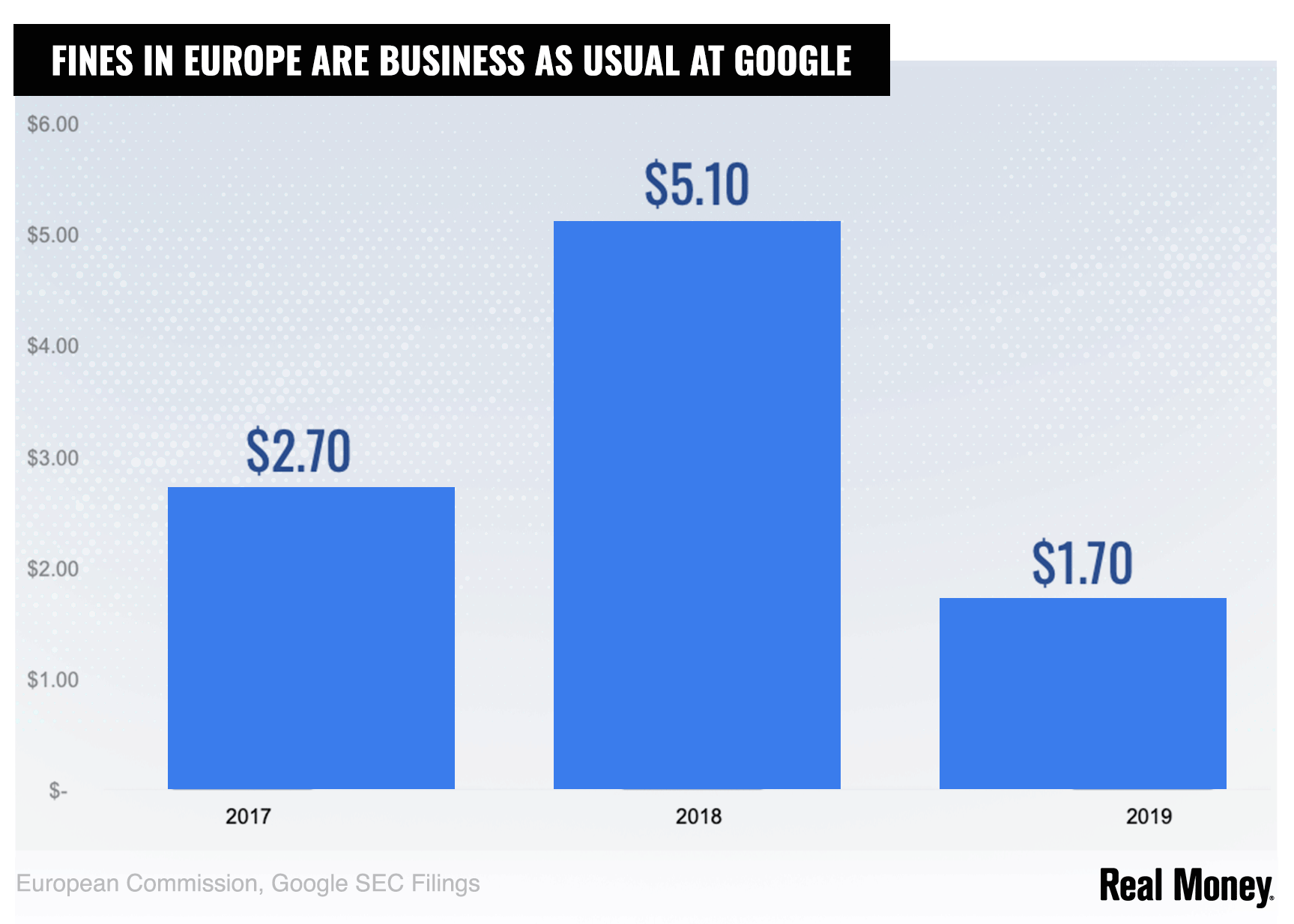 "It's easy to draw the inference that the EU commission is politically attuned and aware," Hynton explained. "The EU always wants to be a step ahead of the United States in regulating. If we fine these companies $1, they will fine $10."

If the U.S. begins cracking down more firmly on Alphabet from ensuing investigations, there could well be a significant ripple effect that could cut into the company's hulking cash horde.

To be sure, Alphabet's cash pile is a massively important bulwark against the undue impact of legislation.

According to FactSet, the company had over $100 billion in cash on hand at the close of 2018, allowing it to pay multi-billion-dollar fines without too much trouble.

The real question comes down to whether regulators across the globe no longer see fines as sufficient, especially as the company appears to simply take the penalties as "speeding tickets" and costs of doing business.

If regulators do indeed see the company as insufficiently compliant after a cavalcade of fines, the next logical step would be an imposition on the tech giant's business model and practices or, worse yet, a potential breakup.

With that level of risk in mind, the palpable anxiety over the stock is somewhat understandable.

Get an email alert each time I write an article for Real Money. Click the "+Follow" next to my byline to this article.
TAGS: Regulation | Investing | Stocks | Software & Services | Technology | Technology Hardware & Equipment | Advertising | China | Europe | Stock of the Day