Wednesday morning, Regeneron Pharmaceuticals (REGN) went to the tape with its quarterly results. The company beat. Did it ever.

For the second quarter, Regeneron posted adjusted earnings of $7.16 per share. That beat Wall Street's expectations by about $1.20. Get rid of the adjustment? OK. It gets better.

The company reported GAAP EPS of $7.61. That number beat Wall Street consensus by more than $2.50. No joke.

EYLEA (macular degeneration) contributed $1.11 billion toward the total sales picture. EYLEA is not why Regeneron has become a household name this year.

Back on Monday, Regeneron announced that the Covid-19 antibody cocktail that it has been working on had both prevented and treated the disease in a limited number of rhesus macaques and hamsters. While this animal study has not yet been peer reviewed, the cocktail (created using two monoclonal antibodies) was indeed able to "almost completely block" such viral infection. The results of this trial meet or exceed results of similar studies done on animals by other vaccine candidates.

While only 36 macaques and 50 hamsters were included in this study, they did clear the virus faster than animals treated with a placebo. This offers at least some hope that such a cocktail might work in human trials. That has already gotten underway.

Regeneron has this cocktail in late-stage (Phase 3) clinical trials in humans in order to assess the ability of the treatment to both prevent infection and treat illness in humans. Remember, the company already has a $450 million deal in place with the federal government under the Operation Warp Speed program should the cocktail prove safe and effective.

Is the Stock Cheap?

No. Not in my opinion. REGN has run up of late. Still, the name trades at 24x forward-looking earnings. The stock's five-year average is almost 23x. The S&P 500 trades at 22x.

Would you pay a higher multiple for the company that puts together a double antibody cocktail that actually does something positive for those already infected, while halting the spread of the infection? I know I would.

Now, if the product fails in human trials, the story changes, but right now, if this works, Regeneron is undervalued. 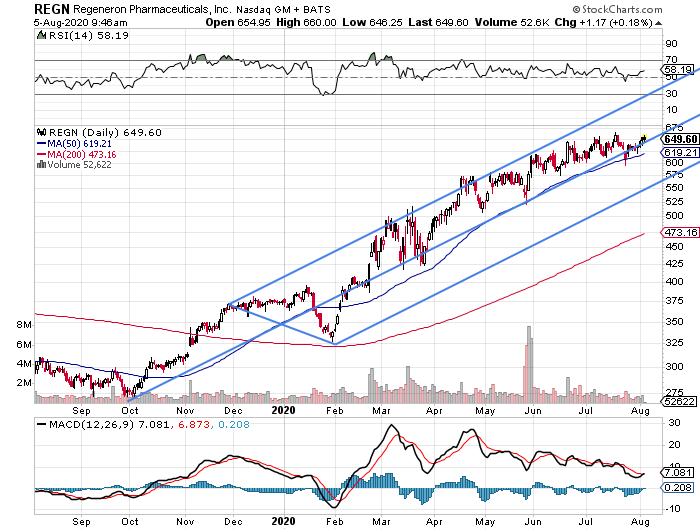 Check it out. A stock in the year 2020 that allows the fabled Pitchfork to work its magic. It's been a while.

REGN has clung to its 50 day simple moving average, which is pretty close to saying that regular support has been found at the central trend line, but that there is some wiggle room in that. Right now, Relative Strength is solid but not too strong, and the daily MACD (Moving Average Convergence Divergence) appears to be headed for a bullish crossover. Huzzah.

I am long REGN, and my price target is $725. I may add at the 50-day line if it gets there without the help of a news event.

I see no reason to take profits at this time unless one is overexposed to the name.

Get an email alert each time I write an article for Real Money. Click the "+Follow" next to my byline to this article.
TAGS: Earnings | Fundamental Analysis | Investing | Stocks | Technical Analysis | Trading | Coronavirus