" O, wind, if winter comes, can spring be far behind?"

There was no mincing of words. The man, Dr. Robert Redfield, Jr., who directs the Centers for Disease Control, addressed the U.S. Chamber of Commerce. He was blunt: "December and January and February are going to be rough times. I actually believe they're going to be the most difficult time in the public health history of this nation, largely because of the stress that it's going to put on our health care system."

Thanksgiving fell on Nov. 26 this year. We know that folks got together. We know this because lines at testing sites were several blocks long and that air travel increased from prior levels. Yesterday was Wednesday, Dec. 2. Just plain old Wednesday, six days after Thanksgiving. According to that Johns Hopkins University website that a lot of us have been following for most of the year, slightly more than 200,000 new infections of SARS-Cov-2, the virus that causes Covid-19, were confirmed in the U.S.

The second highest number of new infections since Thanksgiving and also the second highest number of new infections ever. Winter comes. There are 3,007 counties in the U.S. Somehow, my county out on Long Island contributed just less than 1,000 to that whole, our worst day since April. This virus has more than 100,000 Americans currently hospitalized, and on Tuesday, for the first time ever, the virus claimed more than 3,000 (3,157) American souls.

Tomorrow is "November Jobs Day." Expectations for job creation are well below what we have experienced throughout what was truly a miraculous economic rebound experienced this past summer into early autumn. Of course, that rebound was built upon the rather heroic cooperation between the Fed, the U.S. Treasury, and when they were motivated, our legislators. Outside of housing and manufacturing (though they too, now slow down a bit), there have been clear signs of this rebound becoming a "premature peak" in economic activity as small businesses have gone about as far as they can, and as households rely upon others, as incomes and pantries run dry.

The Federal Reserve published its Beige Book on Wednesday, as it always does two weeks ahead of FOMC policy meetings. We learned that of the 12 districts, growth has already hit stall speed in four of them. This was just hours after the ADP Employment Report underwhelmed in terms of private sector job creation.

Dallas Fed President Robert Kaplan appeared on CNBC. He was as blunt in discussing his field of expertise as was Dr. Redfield. Kaplan said, "Growth has been moderating and we could get to the point, depending on how significant this resurgence (in new infections) gets, that growth actually stalls out - either by the end of the year or into the first quarter." Kaplan added, "The next three to six months is (are) going to be challenging." Reference Dr. Redfield.

We're in a fist fight with a monster, gang, not each other. Pray for each other. I want you also to reference Percy Bysshe Shelley, the European poet now gone almost two hundred years: "Can spring be far behind?" Spring is not about pitchers and catchers this year, it's about regaining some quality of life.

Check the guy on your right. Check the gal on your left. Everybody hurts. Everyone needs something. Maybe just a voice. Even if they don't ask. This is the home of the brave.

Though both the U.S. 30-year bond and 10-year note are now (at zero dark-thirty, Thursday morning) yielding a hair less than maybe they were on Wednesday, there is no doubt that bond traders have taken a pound of flesh out of long-dated Treasury prices this week. I showed you this chart of the 3-month / 10-year yield spread 24 hours ago. This, the most closely watched of yield spread by policy makers steepened again yesterday. 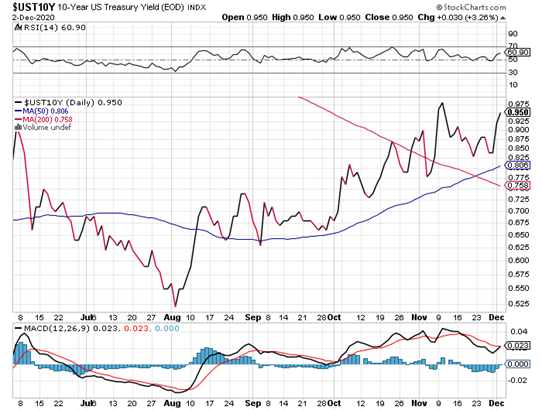 Is what we see before us, the cheery indication of economic growth in a post-vaccine distribution world? Or is this the harbinger of a coming period of consumer level inflation that perhaps the Fed and the highly indebted might welcome, but a U.S. consumer that just got his or her tail kicked from one side of the street to the other will not be ready to cope with?

The fact that there is at least talk of fiscal stimulus is what has kept equity markets in place at elevated levels. This is why breadth. if not overwhelmingly positive, has at least been in the words of Real Money's Helene Meisler, "a giant chop-fest."

At some point, hopefully sooner, but probably later, our legislators will agree that average folks without cushy jobs and fancy pensions also need to eat. There will be a fiscal support package that will pass only when both sides think they can take the credit. That is when supplies of tens, twenties, and thirties will flood the bond market, taking the 10-year above 1% and the 30-year close to 2%. That is when the FOMC will have to decide just how much it will pay for all of this.

This will be the day that Modern Monetary Theory converges with Yield Curve Control, both in my opinion, perverse but perhaps inevitably realistic as the application of economic policy implementation must force the boundaries of risk through an era of unnatural evolution in order to preserve or extend the global debt super-cycle well beyond its natural expiration date.

The House of Representatives on Wednesday passed the "Holding Foreign Companies Accountable Act," which will give foreign corporations three years (so no reason for anyone to do anything today) listed at U.S. exchanges to get their acts in gear. In other words, they'll have to live up to the same standards of oversight that domestic companies must live by. The bill will now go to President Trump for his signature, as the Senate passed this bill months ago. President Trump is expected to sign probably the one thing that there is clear bipartisan agreement on.

It's early, but President-Elect Joe Biden does not seem all that eager to undo much of President Trump's trade policies with China, in particular. Of course, this could all be the foundation of a negotiation that gets something of (great) value in return for lowering U.S. tariffs on imported goods. This, we won't know, until we know. This is what I would do. As always, I am here to help.

Mel Allen? No. Cybersecurity. In demand.

It's not about software or big data. I am sure you noticed last night that no price was too low as Splunk (SPLK) shareholders took that name out back and stomped on it, post-earnings. An old school beat-down.

However, long-time Sarge-fave Zscaler (ZS) , Okta (OKTA) , and CrowdStrike (CRWD) all went to the tape with earnings and revenue beats for the quarter. Nice margins, too.

Apparently things like cloud-based security are really, really important in the work-from-home economy. Apparently, VPN replacement is a priority, and identity management has become key, as in a way to unlock information.

As we work our way through the very early morning, I see ZS up 11%, OKTA up 8%, and CRWD up 13%. Rock and roll. There's not enough room for it here, but both ZS and CRWD now approach and even surpass key pivot points as night becomes the day. There's a good chance I go into this for you in a couple of hours at Real Money -- unless Kroger (KR) hits a five-run homer or something.

... Have the intro music to "This Week In Baseball" stuck in their head too?

(MRVL is a holding in Jim Cramer's Action Alerts PLUS member club. Want to be alerted before Jim Cramer buys or sells this stock? Learn more now.)

Get an email alert each time I write an article for Real Money. Click the "+Follow" next to my byline to this article.
TAGS: Federal Reserve | Futures | Investing | Jobs | Markets | Stocks | Trading | Treasury Bonds | Cybersecurity | Coronavirus