Everyone is talking about the great rotation out of growth and into value stocks. Can it last? Will it last? I wish I knew the answer.

I call those days when everyone all of a sudden notices something that has been taking place for a while Realization Days, since they tend to come closer to the end of the move than the beginning.

I have praised the breadth of the market of late, and that began when the value stocks started outperforming. The bears will like that the last time we saw a similar move was in early October (blue box on the chart).

But I would note that the main difference between then and now is breadth. Notice that the McClellan Summation Index was heading down in that October period. It is not heading down now. In fact, it would take a net differential of negative 2,300 advancers minus decliners to halt the rise (and therefore a bit more than that to get it to turn down). That was not the case in early October.

That the number of stocks making new highs peaked for this current rally last Wednesday and has been moving down ever since is somewhat concerning. And then there is the upcoming overbought reading.

My own Overbought/Oversold Oscillator is based on the 10-day moving average of the advance/decline line. I look back 10 days ago to see what numbers we are dropping. When we drop a long string of positive readings, we are overbought. The assumption is that it gets harder to replace a big positive number with an even bigger one, thus slowing the upside momentum -- that's how we get overbought.

Oversold readings are the inverse: We look for a long string of red or negative numbers to drop. The chart shows the overbought reading. Then there is the math behind the chart; that's the table underneath it. You can see that eight of the last 10 trading days saw positive breadth. That makes the market overbought sometime between Tuesday and Thursday this week. 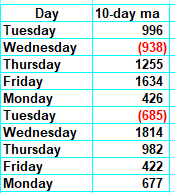 Yet the 30-day moving average of the advance/decline line (an intermediate-term Oscillator) is not overbought. Later this week it will drop a string of red numbers. That's why I believe we should see a short-term pullback and another rally.

With the comparison of the November peak in the market that I discussed in Monday's column in mind, I feel that unless breadth turns decidedly weaker I don't see that scenario right now. Just a short-term pullback and another rally.

Get an email alert each time I write an article for Real Money. Click the "+Follow" next to my byline to this article.
TAGS: ETFs | Investing | Markets | Small Cap | Stocks |