Rise and shine. Up and at 'em.

You know the drill. Half-day today for US financial markets. Equities markets will close today at 13:00 (1 p.m.) ET and bond markets an hour later.

One would think that trading volumes might be light. That said, I have experienced over the course of my now long career some crazy (both good crazy and bad crazy) half-day Fridays after Thanksgiving. You never really know until the bell rings. The good news, if you are up for work bright and early this day while everyone around you slumbers through their mini food comas, is that pie of all types has been authorized by the commandant for breakfast today. So, enjoy.

Apparently, Visa (V) is reporting that November-to-date payments volume is up 9% over the year-ago pace going into the Black Friday/Cyber Monday weekend. Before getting too excited about that, there has been a growing reliance upon credit by US consumers of late to just get by. Visa reports that such payments were up 10% year over year for October. Global processed transactions are also up 10% for November and cruising at 140% of November 2019 levels.

Readers will recall that the National Retail Federation is expecting holiday sales to rise 6% for November and 8% for December this year. When factoring in the most recent report (October) for the Consumer Price Index that showed year-over-year inflation growth of 7.7%, these projections would amount to a contraction in holiday sales for November and little to no growth in December.

For those looking to try to play the retailers en masse this season, there are two primary ETFs that blanket the space that are composed quite differently and have not performed in line with each other. With the S&P 500 down 15.5% year to date, the SPDR S&P Retail ETF (XRT) is down 26.19% while the VanEck Retail ETF (RTH) is down just 12.54%.

When looking at composition, no single stock held by XRT bears more than a 1.65% weighting, whereas RTH focuses heavily upon a few individual stocks. Amazon (AMZN) bears a 14.5% allocation, while Home Depot (HD) , Walmart (WMT) , Costco (COST) , TJX (TJX) and Lowe's (LOW) all carry weightings of between 5.37% and 10.45%.

The difference beyond past performance is that while XRT appears to be trying to put the finishing touches on a still under development "cup" pattern... 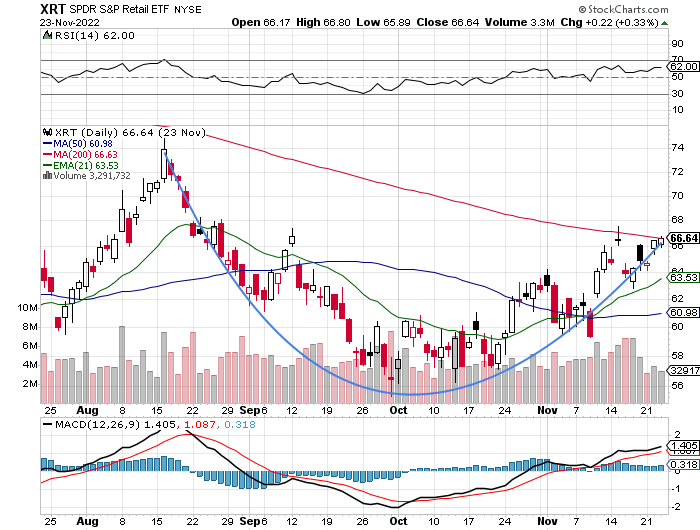 ... the fund is still pressed up against resistance at its 200-day simple moving average (SMA). On the other hand, RTH... 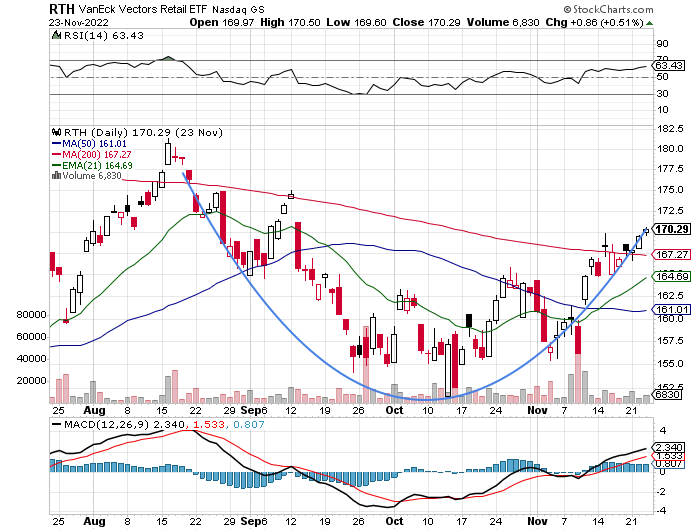 .... looks to be at the same point in the development of that cup (no handle yet), but unlike XRT has already broken out past that 200-day line, and therefore, should this fund face some pressure, will at least have some technical support to lean on.

Going back to Wednesday, there was very little in the way of surprise in the minutes of the Federal Open Market Committee (FOMC) policy meeting of Nov. 2. We look at the text: "A substantial majority of participants judged that a slowing in the pace of increase would likely soon be appropriate. The uncertain lags and magnitudes associated with the effects of monetary policy actions on economic activity and inflation were among the reasons cited regarding why such an assessment was important."

That said, officials in general saw few signs of inflation abating, but that policymakers need a chance to evaluate the impact of past rate hikes. However, "various" Fed officials in these minutes said that persistent inflation could force the fed funds rate to end up with a higher terminal rate than previously expected in order to bring inflation back toward the central bank's 2% target. This is in line with where Fed Chairman Jerome Powell was in his news conference back on Nov. 2.

The Atlanta Fed's GDPNow tool, which is probably the best (but still not great) real-time GDP tracker we have, was revised higher on Tuesday to 4.3% from 4.2% (quarter over quarter, seasonally adjusted annual rate) for the fourth quarter. Seems incredible, right? The US economy just came out of a recession, at least by definition, that lasted through the first half of 2022, and most economists see the US economy either in recession by the second quarter of 2023 or coming very close to recession by then.

The macro of late has been back and forth, looking strong on one item and weak on another. Wednesday was a perfect example. Initial jobless claims hit the tape at 240,000, which is the highest level of new individuals filing claims for state unemployment benefits since late August. More important than initial claims are continuing claims because rising continuing claims are seen as a harbinger of recession. Continuing claims run a week behind initial claims and printed at 1.551 million on Wednesday. This was the sixth consecutive weekly increase for the series and its highest print since early March.

Simultaneously, October Durable Goods Orders surprised to the upside. New orders showed growth of 1% month over month versus expectations for 0.4%. Ex-Transportation orders were up 0.5% m/m, beating expectations of 0.1%; ex-Defense orders were up 1.4% m/m and besting expectations of 0.4%; and Core Capital Goods Orders (ex-Air, ex-Def) hit the tape up 0.7% m/m, against a consensus of 0.2%. Durable goods orders in October simply beat the street every which way they possibly could.

The macro scoreboard? One up, one down.

S&P Global then released its November Flash PMIs. They were awful. The Manufacturing Flash hit the tape in a deep state of contraction at 47.6, well below consensus view of 50 and down from October's 50.4. The Services Fash printed in even deeper contraction, at 46.1, well below the 48 that economists were looking for and down from October's 47.8. Just an FYI: The Services PMI has now been in contraction for five consecutive months.

Within minutes, October New Home Sale and the University of Michigan's revision to its November survey for Consumer Sentiment would both print. October New Home Sales surprised decisively to the upside, printing at 632,000 (SAAR), up from September's revised 588,000 and well above projections for 575,000. Consumer Sentiment hit the tape at a headline print of 56.8, which is rather poor, but was up huge from the 54.7 mid-month flash. More importantly, at least to the Fed, within that survey, one- year-out inflation expectations dropped from 5.1% mid-month to 4.9%, while five-year-out inflation expectations remained constant at 3.0% from mid-month, but were up from 2.9% in October.

Simple. Durable Goods Orders and New Home Sales are included in Atlanta's algorithm. These are hard data, and part of the model. They were bright spots for the economy. Continuing jobless claims are hard data, but are volatile and updated weekly. The flash PMIs (and Consumer Sentiment) are surveys, thus not hard data. In addition, many US economists follow the ISM surveys more closely than those conducted by S&P Global. The Atlanta model will not see those numbers. Therefore, the snapshot was revised higher, even if the macro overall was just as negative as it was positive.

As the US and English national soccer teams get set to re-enact the Battle of New Orleans in Qatar on Friday, the Daily Star (a British tabloid) is reporting that Apple (AAPL) is considering making a bid for iconic English Premier League franchise Manchester United (MANU) . MANU went out on Wednesday with a market cap of little over $3 billion. Apple's supposed interest is in the 5.8 billion British pound or $7 billion range. The Glazer family, who bought the club in 2005 for 790 million pounds, is said to be asking as much as $8.25 billion.