Here we are, after Friday's trading, the 30-day moving average of the advance/decline line will reach its overbought reading.

I do expect, no matter what the market does on Friday, this indicator will rise. It's the math.

You might recall it got oversold in late March and it has had a nice lift off that oversold condition. Much will depend on what the breadth of the market is on Friday to know whether it makes a higher high than it did in mid-February. A lower high brings about more concern than a higher high.

Let me note that the breadth of the market is not terrible, in fact, overall breadth made a new high on Thursday along with the senior indexes. And the McClellan Summation Index is still rising. The cushion has expanded in the last two trading days. It now requires a net differential of negative 1,100 advancers minus decliners to halt the rise in the indicator.

I might even point out that at this point in a rally it ought to need something closer to negative 2500 to halt the rise, which would make it overbought, but since breadth overall has been OK, it has been crummy enough that the cushion for this indicator is lower than where it ought to be.

Now, let's talk about sentiment. We all know everyone who was bearish two weeks ago is no longer bearish. We know that anecdotally, but we also know it from the Investors Intelligence bulls we looked at earlier this week. The American Association of Individual Investors saw the bulls back off a tad and bears rise, also a tad. But it is the four week moving average of bears that caught my eye. It rarely gets this low, but as you can see, when it does, the market has corrected. The only time it didn't was in 2014, when instead it went sideways for months on end. 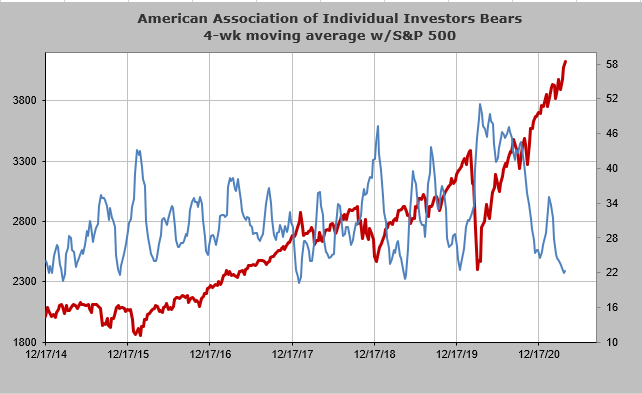 The folks over at the National Association of Active Investment Managers, who two weeks ago had their exposure to the market at 52, are now at 96.5. So, maybe they have some room to go, because they are not all in on margin, as they were at the prior highs this year, but they are clearly no longer un-exposed. 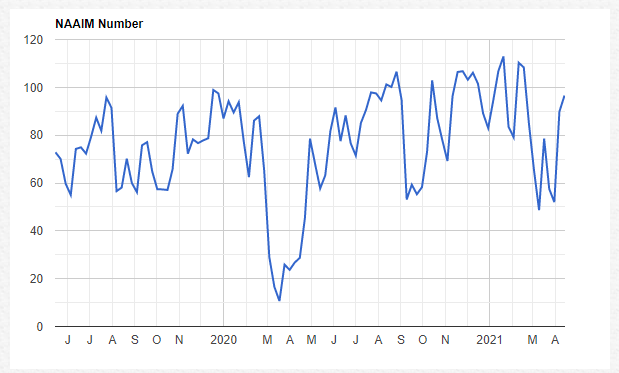 Now let's move on to the 21-day moving average of the put/call ratio for exchange-traded funds. In the last nine trading days this ratio has been over 1.0 exactly once. That has brought the moving average close to where it was at the October high. It has not quite reached the September readings, but I figure it will be at/under that October reading by Monday. 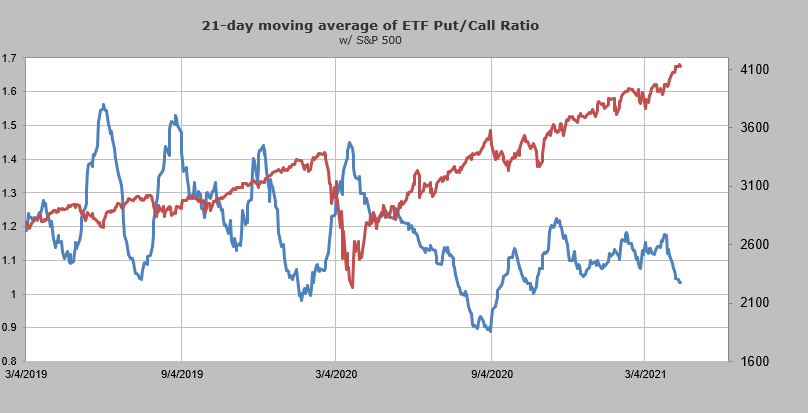 Even the Index put/call ratio is getting low, and this hasn't been low since September. It never got low in January or February. It's not at the September low yet and there is certainly room for it to move all the way down to where it was in February last year, but my take is that this too shows folks have thrown caution to the wind.

I think a pullback in the latter part of April would shake the trees again, something that feels needed.

The lows of the day are the key technical level now as that is likely to be where some stop losses will be set.

What's Your Game Plan? What Traders Need to Watch Tuesday and Wednesday

This isn't the worst time to get your buy list ready.