By TIMOTHY COLLINS Nov 13, 2019 | 01:05 PM EST
Stocks quotes in this article: GOOGL, FB, C, AAPL, GS, MSFT, AMZN
When you control information, have access to information, and can use information to your advantage, many will view you as a threat as well as a resource. That basically describes companies like Alphabet ( GOOGL) and Facebook ( FB) . It's why many don't trust them, but continue to use them. Google has set off not one, but two alarm bells in the past week because of moves it has made in the field of information.
The most recent moves came with the company announcing it is set to offer checking accounts next year, but before we jump into the notion of banking-by-Google, it's worth noting this is projected to mainly be a partnership with Citigroup ( C) as well as a small Stanford credit union. And why not give it a go? Apple ( AAPL) has made things work with Goldman Sachs ( GS) thus far, so why shouldn't Alphabet seek methods to diversify its information and data grabs, I mean, revenue sources.
The search giant already has Google Pay in place, and Facebook is offering something similar this week. I doubt this will move the needle on the surface in terms of revenue, but Google is about data, user habits, spending, ad targeting and more. Access to even more information about monetary habits could prove valuable.
This comes on the heels of Google's deal with Ascension, a health care provider operating 150 hospitals and dozens of senior living facilities. The Wall Street Journal called out concerns of Google's potential data mining and access to health records. Google and Ascension contend this is nothing more than a service deal with Ascension moving data and analytic tools onto Google service (cloud services), so it is really no different than if Ascension used Microsoft's ( MSFT) Azure or Amazon ( AMZN) Web Services.
The data will fall under Health Insurance Portability and Accountability Act, and if you've never dealt with HIPAA, let me tell you its one line you do not want to cross. I'm going to guess Google already has a pretty good idea of your health issues based on your searches. Maybe hitting up WebMD about that rash wasn't such a good idea. Yes, the company would be able to do a deeper dive with access to records, but I can't imagine the risk is worth the reward. FitBit should bring them access to a ton of data they can use for targeted searches and marketing.
The action in the stock has echoed the strength in the overall markets. My concern with Google right here is I believe we need a retest of $1,250 to $1,275 before we can move significantly higher. 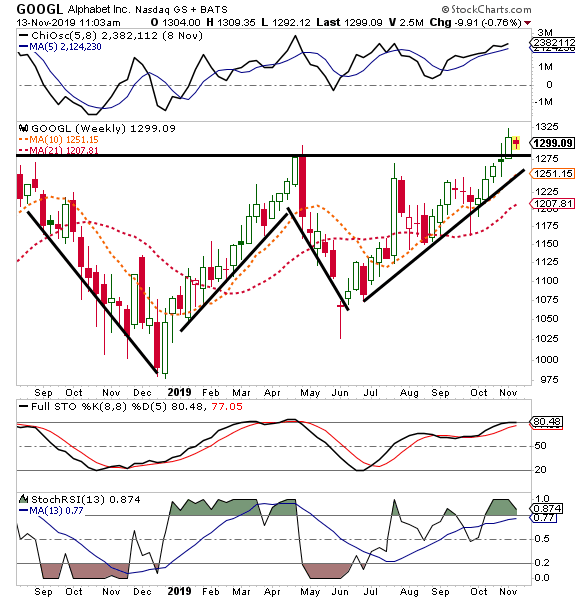 If the StochRSI drops under .80 and below the 13-period moving average, we could be talking more like $1,200 before support gets aggressive buying. Last week's highs give us a resistance point to watch. There's no sense buying Google, until we're above those highs or a successful bounce off the $1,250 to $1,275 area. The news of the last week makes for interesting press, but nothing actionable in terms of buy or sell. I'd wait for actionable news or a price trigger before doing anything in the name.

Get an email alert each time I write an article for Real Money. Click the "+Follow" next to my byline to this article.
TAGS: Investing | Options | Stocks | Health Care Equipment & Services | Technology | Stock of the Day