We've all been there. Tension in the street. All seems to have settled down, then suddenly someone who was not even there at the start throws a punch. Mayhem ensues.

In a way, that's what the action seemed like around Wednesday's closing bell. Prices had softened going into the close. Then wham. Somebody threw a haymaker. Wow. The Dow Industrials, the S&P 500, the Nasdaq Composite. They all closed at the absolute bottom of their daily range. A few minutes later, we all knew that there was something seriously wrong with Netflix Inc. (NFLX) . Oh, but the Dow Transports? That index followed Tuesday's 1.8% bull run with a bearish 3.6% mauling on Wednesday. Within the transports, the Dow Jones U.S. Airline Index gave up 3.85%, but still resides near the top of its chart.

However, CSX Corp. (CSX) was driven to the nether regions by investors, who pushed that stock below both its 50- and 200-day simple moving averages (SMAs). That created a broad and severe reaction that was felt across that entire growth-reliant industry. The beating taken by the rails on Wednesday was simply epic in nature, as the Dow Jones U.S. Railroad index surrendered 7.16%.

With the rails on their heels, this group will remain in focus (along with several other groups) as Union Pacific Corp. (UNP) posts results Thursday morning. Investors will hear from Kansas City Southern (KSU) on Friday and Norfolk Southern Corp. (NSC) next week.

While the broader indices did surrender some turf as the transports were hit and while the president expressed unhappiness in regard to whether there is a developing potential for the U.S. and China to actually get anywhere on the path toward a trade deal, the fact is that trading volume contracted at both the New York Stock Exchange (NYSE) and Nasdaq market sites on Wednesday from Tuesday, so we do not have that other shoe dropping across the marketplace just yet. Institutions have not -- at least not yet -- started to flee equities broadly. My guess would be that badly disappointing data for June housing starts, and especially June building permits, kept these investors in their socks as bad news is good news as far as monetary policy watchers are concerned.

Probably not. We seem to always worry about the debt ceiling, and then the "imaginary" crisis passes uneventfully, or even eventfully, but quickly is forgotten until the next time. Downgrades do happen. Not that they mean much in retrospect.

Treasury Secretary Steven Mnuchin has already warned the nation. The federal government could run out of cash by early September. Why is that a big deal in mid-July? Simple. The House of Representatives goes on recess at the end of next week, July 26, while the Senate hangs in there until Aug. 2, a week later. Of course neither legislative body will be back to doing the business of the people prior to early September. (But keep voting yourselves pay increases. Nice work if you can get it.) Both chambers return to their "grueling" agendas on Monday, Sept. 9.

Speaker of the House Nancy Pelosi has set a deadline of this Friday (tomorrow) for the legislative and executive branches of government to reach an agreement on increasing the limit of federal borrowing as well as on new spending levels. Here's a crazy idea. Being it's essentially meaningless, why do we even have a debt ceiling? We never stick to it, yet it manages to slow down spending and creates unnecessary questions around the quality of the credit of the U.S. government.

You can still haggle over spending all you want, but get rid of the ceiling. Pelosi would like to have something vote-able on the House floor by next Thursday, giving representatives at least a full day to get something on the tape.

Tesla Inc. (TSLA) CEO Elon Musk made the news again. I listened; he sounded very sharp. Humans need to enter into a symbiosis with artificial intelligence (aka AI) or will be left behind. That was the gist.

Hmm. Left behind by whom? The robots? The idea is to connect the human brain to this AI via a neural lace of ultrathin electrodes that will capture as much information from the brain as possible. The wiring... um, I mean electrodes.. must be super thin, very flexible, and number in the thousands to provide sufficient bandwidth. Again, hmm?

While I can see researching ways to combat and better cope with disability or serious illness, someone suffering from any number of maladies might just look forward to a symbiotic relationship with a system that might react in a way messaged by the brain, especially if the body is unable. My prediction will

be that AI will remain among the hottest areas of investment moving forward. Obviously. That places value back on some of the semiconductors such as Nvidia Corp. (NVDA) or Intel Corp. (INTC) , and certainly on the software/cloud-type names, though I don't know how many volunteers will be found initially to have their brains wired in this way. Before we are assimilated into the Borg, I will likely disappear into a wilderness environment sans all technology.Just a thought.

Microsoft Corp. (MSFT) reports after the closing bell on Thursday. Expectations at the headline are for earnings per share of $1.21 on revenue of $32.77 billion. That should be good for 9% sales growth. Whispers are for a minor beat at Microsoft, which is a holding of Jim Cramer's Action Alerts PLUS charitable trust.

Perhaps more focused on than the top and bottom lines will be the performance of the Azure cloud. I have long written that as capex returns to the economy that digitization of data is where much of that corporate expenditure has to go, and Microsoft is perhaps the best-positioned firm anywhere to manage a hybrid cloud (on premise/off premise) environment for these businesses. It deserves the 26x forward earnings at which the stock trades. The significant competition for the business cloud comes from Amazon.com Inc.'s (AMZN) Amazon Web Services (AWS). Each quarter, investors watch for the gap between the two to close. Thursday evening will be no different. 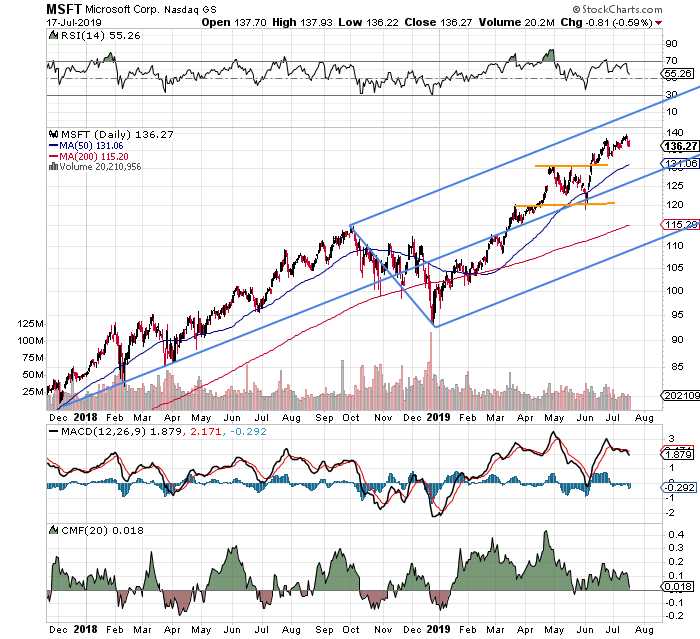 As one quickly sees, Microsoft has worked its way toward the top trend line of my Pitchfork, a line that the shares have never tested since the creation of the cross-bar late in 2018. In June 2019, MSFT broke out of a short basing pattern (orange) and has stalled just a few percentage points above pivot.

This is another one of those names that we have been in for a while, so we do have something to protect. A $140 call expiring this week, went out last night at a mere 89 cents and may be worth less as Thursday's trading session progresses. That might be an inexpensive way to enhance any upside reaction that might be created by the numbers this afternoon.

Get an email alert each time I write an article for Real Money. Click the "+Follow" next to my byline to this article.
TAGS: Bonds | Earnings | Investing | Stocks | Software & Services | Technology | Transportation | Real Money