Qualtrics announced strong earnings on Wednesday after the close of trading. Serafin said Qualtrics just completed a record quarter that included 120% net retention. For a growing number of companies, an experience management platform is becoming critical, he said.

Smith said it's not just companies that need to deliver great experiences, it's also governments. That's why the state of Missouri is using Qualtrics to gather valuable feedback on its vaccine distribution program.

Using Qualtrics, the men said, companies such as United Parcel Service (UPS) have been able to provide their customers with better experiences, while Royal Caribbean Cruises (RCL) has been able to ask guests how they'd like to see cruises return post-pandemic.

Let's check and see how investors are liking the experience of the charts of XM.

In this daily Japanese candlestick chart of XM, below, we see that early investors in XM back in late January and early February did not have a good experience as prices declined into early April. Recently XM has firmed and has crossed above the bottoming 20-day moving average line. Notice how most of the recent candle bars have white real bodies, telling us that prices closed above the opening. The 50-day moving average has a negative slope and intersects around $36.50. This line is likely to be challenged and broken soon.

The On-Balance-Volume (OBV) line shows a decline until April 12, after which it has been improving. A rising OBV line tells us that traders are being aggressive buyers, with more volume traded on days when the stock closes higher. The 12-day price momentum study shows us a bullish divergence as momentum has improved from March to April even though prices weakened over the same time period. The slower pace of the decline means that someone(s) was a scale-down buyer.

In this daily Point and Figure chart of XM, below, we can see that prices are projected to rally to the $40 area for starters. 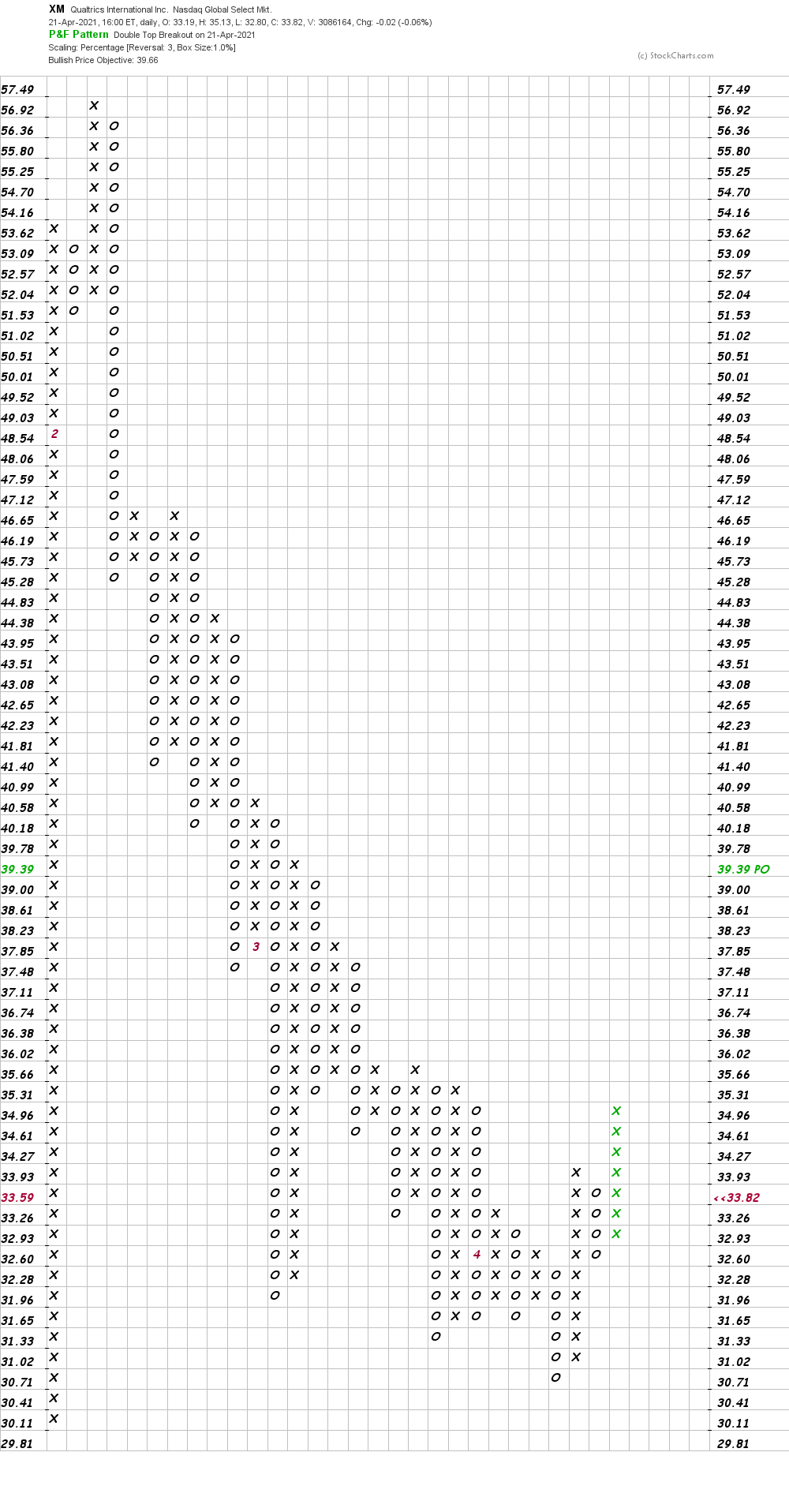 Bottom line strategy: Aggressive traders who are comfortable trading relatively new issues could go long XM around $36. Risk to $30. Our first objective is $40, but if the charts live up to the fundamental story we should see further gains in the weeks and months ahead.

Get an email alert each time I write an article for Real Money. Click the "+Follow" next to my byline to this article.
TAGS: Investing | Stocks | Technical Analysis | Software & Services | Technology | Mad Money | Executive Interview | Real Money