By TIMOTHY COLLINS Nov 07, 2019 | 02:20 PM EST
Stocks quotes in this article: QCOM, AAPL, XLNX
Qualcomm ( QCOM) flexed the financial benefits of its Apple ( AAPL) and Samsung licensing settlements this fourth quarter. The company delivered earnings per share of 78 cents against estimates of only 71 cents. Revenue of $4.8 billion slid in just ahead of the $4.7 billion expectations. In a quarter filled with 5G and chip disappointments, Qualcomm breathed a small sigh of relief and hope into the sector.
It's worth noting the company's licensing division produces about a quarter of the revenue and carries strong margins. For the first quarter of 2020, licensing is expected to generate revenue in the $1.3 billion to $1.5 billion range, ahead of the $1.23 billion estimates. Margins should increase 2% to 6% over the fourth quarter, which saw margins at the top end of the range. Additionally, November to December tends to be the strongest two months of sales for Apple products, which directly benefits Qualcomm. Qualcomm won deals to supply 230 devices with 5G designs, up from only 150 last quarter.
Despite these pluses, Qualcomm's guidance isn't quite as strong as I would expect, given the stock's strong performance. Management guided Q1 earnings per share, or EPS, in the 80-cent to 90-cent range against current estimates of 83 cents. That places the midpoint two pennies ahead of consensus, which is a positive. The wide revenue range of $4.4 billion to $5.2 billion gives the company a midpoint of $4.8 billion against estimates of $4.86 billion. That same $4.8 billion revenue was also the revenue the company produced in Q1 2019, a year earlier. Given the range, it is possible Qualcomm actually sees smaller revenue in Q1 2020 vs. Q1 2019. On the flip side, it could be higher, so we are looking at year-over-year revenue growth of 9% on the upside, but have the possibility of a 7% deceleration as well. We already know earnings will be lower by 25% to 33% vs. a year ago.
In 2020, Qualcomm is projecting 1.75 billion to 1.85 billion smart devices and 175 million to 225 million 5G handsets. The midpoint is an increase of 3% from 2019, but equal to shipment totals of 2018. Basically, the only growth is coming from 5G, and it isn't overly impressive for next year -- at least not yet. It's not terrible, but we're talking in the 10% to 15% range. That leads me to conclude the upgrade or replacement cycle of 3G and 4G may be a little slower than anticipated, but should create consistency in 2021 through 2023.
During fiscal 2019, the company repurchased $1.79 billion in stock. It still has $7.1 billion remaining under the stock buyback program, but 2019 was the second lowest stock buyback in seven years, and it's not really close to most of the other years when the company repurchased more. It has $12 billion cash on the books, but also $15.9 billion in debt. Fortunately, cash flow isn't an issue, so I don't see the debt as an issue, and the average rate across that debt isn't terrible at around 6%, but it could likely be improved in the current market conditions. Next year, the company projects to have 50 million fewer shares and a higher tax rate, but it will be interesting to monitor the EPS results if the share count remains at current levels with the higher tax rate. Unfortunately, that will set up a scenario where the the upper end of the current range becomes a bigger challenge. 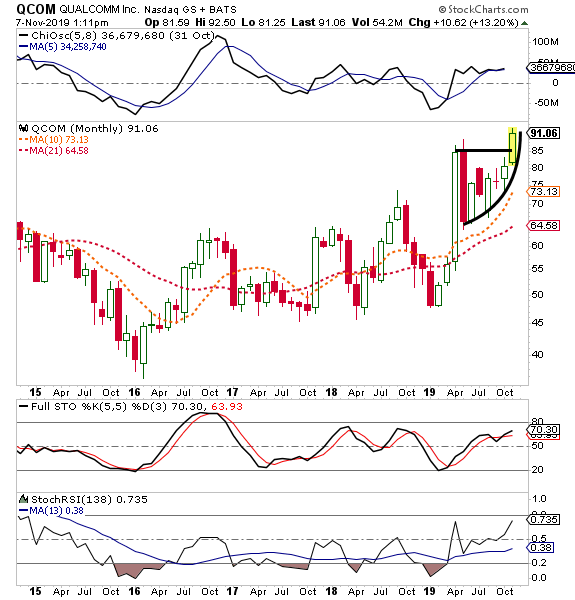 Overall, the quarter was solid. Guidance is more good than bad, and Qualcomm should offer stability at the least. I'm more comfortable owning in the $75 to $85 range, but understand the pull to $100 here. Traders love round numbers. As I wrote earlier,  I'm more inclined to watch and move on Xilinx ( XLNX) than Qualcomm, unless we get a retracement of Thursday's earnings move. That means it is a pass for me here.

Get an email alert each time I write an article for Real Money. Click the "+Follow" next to my byline to this article.
TAGS: Investing | Stocks | Technology Hardware & Equipment | Stock of the Day