In a recent Real Money column, Jim Cramer said that before you buy any stock, you need to play a little game. That game is "hostage or not" and it will tell you if your company is hostage to the trade war with China or whether it can be safely bought. One apparel maker Cramer pointed out -- PVH Corp. (PVH) -- is most definitely hostage to trade until the company can produce most, if not all, of its products outside of China.

Let's check out the charts and indicators of PVH.

In the daily bar chart of PVH, below, we can see that prices have been cut in half the past 12 months as PVH fell from around $145 in late September of last year to around $70 last month. The 50-day moving average line is trying to bottom and the price of PVH is above the 50-day line but below the declining 200-day line.

The On-Balance-Volume (OBV) line has declined for much of the past year and shows a slight rise from August into September. This is a small improvement so we should not get too bullish. The Moving Average Convergence Divergence (MACD) oscillator made a low in June and a higher low in August when prices made a lower low. This is a bullish divergence and foreshadowed the move in the MACD oscillator above the zero line this month.

In the weekly bar chart of PVH, below, we can can see that prices have been under selling pressure for a longer period of time than the daily chart shows. PVH is below the declining 40-week moving average line.

The weekly OBV line has been weak since April but shows an uptick from August into September. The weekly MACD oscillator is crossing to the upside generating a cover shorts buy signal for PVH.

In this Point and Figure chart of PVH, below, we can see an upside price target of $99. 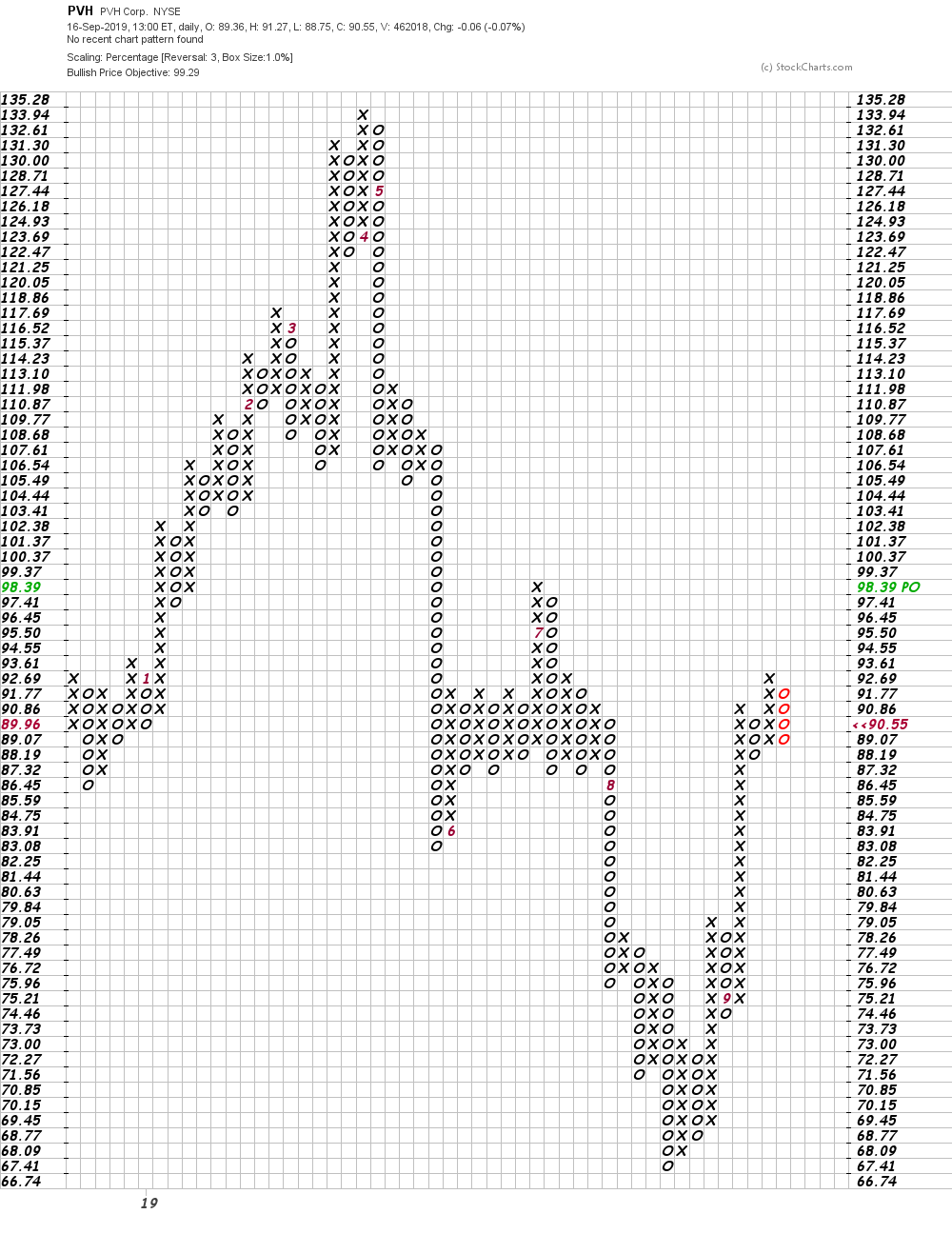 Bottom-line strategy: PVH has been in debilitating decline for several months, which makes the rebound from the August low unimpressive at this juncture. A retest of the recent low would be welcomed and give early buyers more confidence. I would avoid this stock for now.

Get an email alert each time I write an article for Real Money. Click the "+Follow" next to my byline to this article.
TAGS: Investing | Stocks | Technical Analysis | Apparel | Mad Money

Uranium ETFs Are Starting to Glow, but Which Ones Are 'Green'?

What Strategy Should We Have for Snowflake?

With earnings due out Wednesday, here's what I'd do.

Dollar Tree Retreats on Fundamental Downgrade, but What Do the Charts Say?

Let's check out the latest technical indicators on DLTR stock

There's a Lack of Buying Interest, Rather Than Strong Selling Pressure