PVH Corp. (PVH) is indicated to open sharply lower this Thursday morning in reaction to a revenue miss and soft guidance. Jim Cramer discusses this "most reliable indicator of the U.S. consumer" and other stocks in his Real Money column "A Checklist for Investors in This Downer of a Market" today.

Let's check out the charts and indicators to see if there is any chart support or downside price targets for PVH.

In the daily bar chart of PVH, below, we can see that prices declined from June (earlier than the broad market) to late December. From the late 2018 low prices rebounded to an April peak. Notice that the volume of trading did not increase on the recovery except for the late March gap to the upside. Prices traded above the 200-day moving average line in April but prices were never strong enough to change the bearish slope of this indicator.

Earlier in May PVH fell back below the popular averages. The lows of March were broken and now the $105-$110 area is likely to act as resistance.

Notice the sharp move lower this month for the daily On-Balance-Volume (OBV) line, which has quickly broken to a new low for the move down. Sellers of PVH have been very aggressive. The trend-following Moving Average Convergence Divergence (MACD) oscillator is well below the zero line with an outright sell signal.

In the weekly bar chart of PVH, below, we can see that the 2018 decline erased the entire 2017-18 rally. The 2019 recovery looks like a 50% retracement and now prices look headed back to the $90-$85 area. Prices are below the declining 40-week moving average line so mathematically we are in a downtrend.

The weekly OBV line shows a double-top pattern the past twelve months and weakness the past two months. The weekly MACD oscillator has just crossed to the downside and below the zero line for an outright sell signal.

In this Point and Figure chart of PVH, below, the software has projected a possible downside price target of $78 which would break the 2018 low. This could mean that prices retest the early 2016 lows in the $75-$65 area. 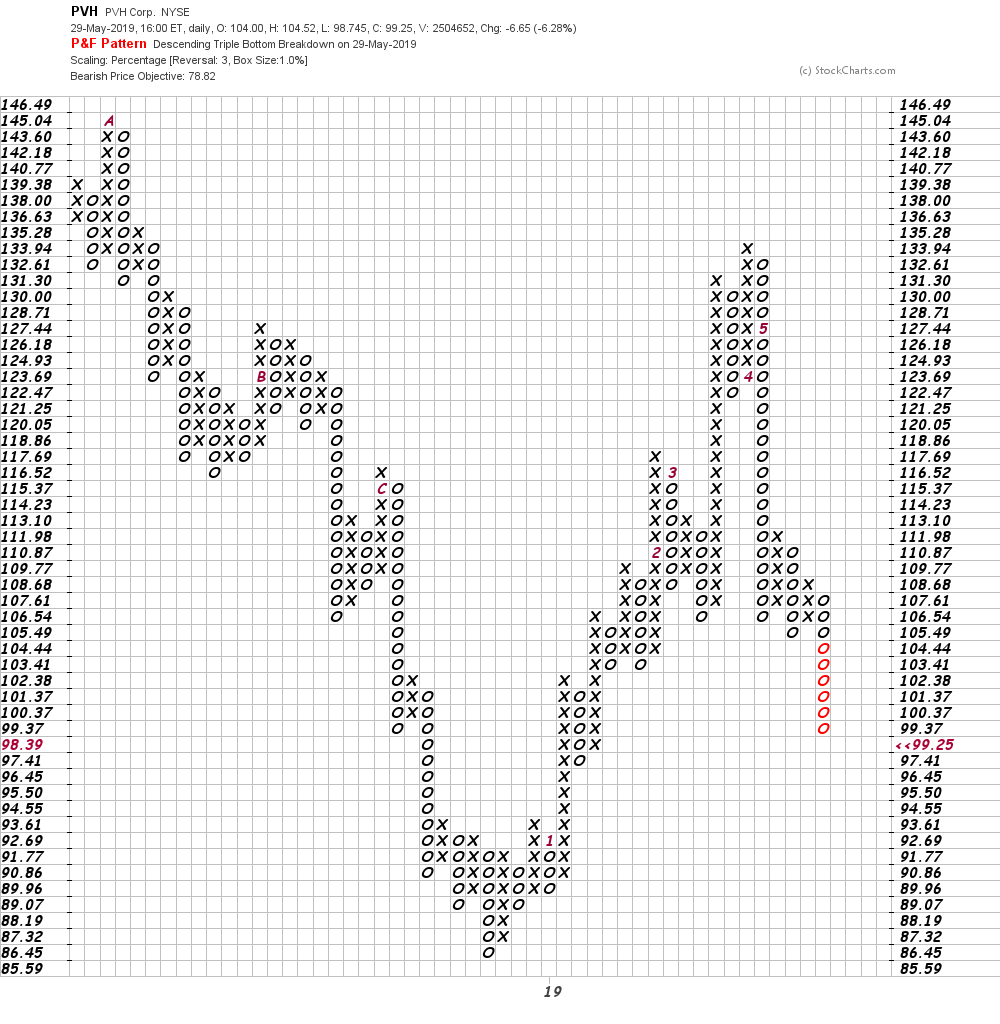 Bottom-line strategy: All three of our PVH charts look bearish and selling pressure has taken control of the price action. A test and break of the late December lows is probably the most likely path in the weeks and months ahead. Avoid the long side of PVH until a new base develops.

Get an email alert each time I write an article for Real Money. Click the "+Follow" next to my byline to this article.
TAGS: Earnings | Investing | Stocks | Apparel | Consumer Discretionary | Stock of the Day