Beyond Nike (NKE) , the only green on my screen was the Grinch. A fitting end to a tough week on Wall Street.

Nike, though, Nike defied logic. The company reported fiscal second quarter earnings per share of $0.52 Thursday after the bell. This handily beat estimates by $0.06. Revenue of $9.4 billion snuck in ahead of the $9.17 billion expectations. And Nike did it with gross margins that widened 80 basis points even in the headwinds of several athletic store bankruptcies and continuing competition from Adidas (ADDYY) and Under Armour (UAA) .

My worry, along with what seems to be everyone else's as well, was what would happen in China. Not only did Nike allay those fears, but they crushed them. The company churned out strong double-digit growth in the mid 20% range year-over-year and indicated they see no impact yet from any tariffs or Trade War. This is in sharp contrast to what we just heard from FedEx (FDX) and saw from Micron Technology (MU) . Perhaps shoes and athletic apparel are the anti-tariff trade.

Nike impressed Wall Street by posting a 41% growth rate in its direct-to-consumer and online sales demonstrating the company's ability to adapt to a changing consumer. 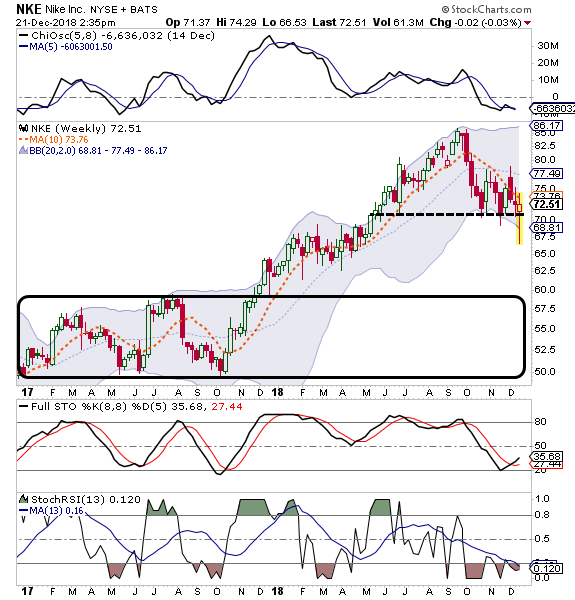 If Nike can hold $70 through the next week, I believe it will be a nice long-side trade to start 2019. I would look for a retest of the $80-85 area during that first quarter and hedge my position at $70.

Like the rest of the market, NKE shares have been oversold in the short-term. That doesn't guarantee a bounce by any means, but I would anticipate buyers will come back into strength first, followed by bargains.

In other words, Nike will be at the top of the holiday shopping list for bulls. I suggest you keep it on yours as well.