"They say the sea turns so dark that
You know it's time, you see the sign
They say the point demons guard is
An ocean grave for all the brave
Was it you that said, how long, how long
How long to the point of no return?"

It's what everyone wants to know. How far is too far? Where are markets now, relative to where they are going? Much of Wall Street thinks higher toward year's end. Santa is on the way. Then again, much of Wall Street has something to sell. Not that this impairs the ability to think clearly for all. That said, group think is just as prevalent up and down the street as it is at the central bank.

The fact is that getting long anything in size for anything other than a specific catalyst-driven reason carries more risk than it has for quite some time. The market itself is not going to bail out mistakes made. Mistakes will instead be punished and often punished severely.

That doesn't mean that there are no sunny skies in our market's future. It does mean that if one is to play the long equity game, then one is simply fighting the Fed, and historically, fighting the Fed has been a poor idea. This time it's different? Yes, yes it is. I have been around for a long time. I remember Paul Volcker well. In fact, I remember his ability to command a room. Nobody spoke out of turn with Paul Volcker around. I was young. I was in awe.

This is not that. This inflation has been caused through the rapid-fire occurrence of pandemic, warfare and fiscal irresponsibility. Lots and lots of fiscal irresponsibility. This is a central bank making sure that all who play the game understand that even if it is not their overt intention to create recession, it is certainly not something to be avoided, especially if economic contraction might serve their chosen greater good of balancing the Fed's dual mandate. To this central bank, creating the conditions that make recession likely are in fact desirable, for that purpose.

More on stock-specific catalysts in just a minute or two.

Thursday got ugly. Again. Equity index futures are under pressure very early on Friday morning. European markets opened weakly on Friday in response to some very recession-looking September flash PMIs across the region. Not only are the US flash PMIs due at 09:45 ET, the Fed chairman himself speaks at 14:00 in DC from a "Fed Listens" event. They don't listen to me. At least not now, not this crew. That much I know.

On Thursday, markets reacted to the Fed's most recent rate hike and hawk-like rhetoric as well as to rate hikes in Norway, Switzerland and the UK. In this column the focus is on equities as that is what I am best known for trading and that is what is easiest to trade for the "do it yourself" crowd. The real victims on Thursday were US Treasuries, though. Again.

The US Ten-Year Note went out on Thursday, yielding 3.7%, up from 3.51%. I see 3.74% this morning. The yield for the US Two-Year Note advanced 12 basis points for the day to 4.11%. I see an incredible 4.2% at zero dark-thirty on Friday morning. That's a spread of -55 basis points. This is quite gnarly. I do not remember this spread ever being inverted this badly. It certainly never signaled anything this ominous during the pandemic, or the great financial crisis, or the early 2000s or the early 1990s for that matter.

Interestingly, the US Three-Month/Ten-Year yield spread is still positive, in fact at +53 basis points. That spread, which has been considered an accurate predictor of economic hardship, remains quite positive, even if the Six-Month /Ten-Year spread currently runs at -1 basis point. The current gap between what 90-day and 180-day paper pay makes no sense to me at this time.

Equities continue to be re-rated at lower valuations. While the S&P 500 and Nasdaq Composite "outperformed" on Thursday at -0.84% and -1.37%, respectively, it was a literal bloodbath everywhere else. The Dow Transports were punched in the nose for 2.33%, while the S&P MidCap 400 gave up 2.13%, the Russell 2000 gave up 2.26%, the KBW Bank Index was routed for 2.48% and the Philadelphia Semiconductor Index took a beating of 2.81%. All of these narrower indexes are more reliant upon economic growth, and quite a few on access to cheaper credit as well.

For the day, not surprisingly, the more defensive sectors provided leadership, with Health Care (XLV) the only sector SPDR ETF showing any green at +0.53%. Within the sector, the Dow Jones US Pharmaceutical Index gained 2.28% on Thursday. Pharma was led higher by Eli Lilly (LLY) , which was up 4.85%. Remember our mention on stock- specific catalysts up above? More on that in a jiffy. Ten of the 11 sector SPDRs traded lower for the day, with Discretionaries (XLY) , Financials (XLF) , Industrials (XLI) and Materials (XLB) , all economically dependent cyclicals, all at the bottom of the daily performance tables.

For the session, losers beat winners by a rough 5 to 1 at the New York Stock Exchange and by about 4 to 1 at the Nasdaq Market Site. Advancing volume took a 23.4% share of composite NYSE-listed trade and a 27.4% share of that metric for Nasdaq listings. Aggregate NYSE-listed trading volume increased 5.1% day over, while aggregate Nasdaq-listed trading volume increased 9.9% day over day. Put plainly, professional money again spent the day turning assets into cash.

With both the economy and the central bank seemingly against the financial market, isn't anyone on our side? Actually, yes, there are two forces working in the market's favor. One is the midterm elections. The other is seasonality. I mentioned Santa above.

Does this mean that one can ignore the realities of economic contraction, a hostile central bank, US dollar strength and continued war in Europe, not to mention a still not quite gone pandemic? Of course not. It does mean that one can act, but only with reason.

I saw two potential catalysts to my liking on Thursday. One in a stock that has been trending well above market performance, and one in a stock that is an old friend but that had been underperforming its own group of late.

Early on Thursday, Eli Lilly (LLY) announced that the US Food and Drug Administration had given the go-ahead for Lilly's oral lung cancer drug Retevmo under the agency's accelerated approval program for certain adult patients bearing a specific genetic makeup and suffering from solid tumors in the lungs. The decision is based upon trials that show promising to optimistic response rates in decreasing tumor size. Lilly will be required to show continued clinical benefit in order to preserve the approval.

In addition, UBS analyst Colin Bristow (1 star at TipRanks) upgraded his rating for LLY from "neutral" to "buy" while upping Lilly's target price from $335 to $363 despite its elevated (38x forward earnings) valuation. UBS also made LLY the firm's top large-cap stock pick in this space, citing clinical data for diabetes / obesity drug Mounjaro that showed over 20% weight loss. Bristow sees $25 billion in peak sales potential for the drug.

Morgan Stanley had earlier this past summer projected that LLY will dominate the global obesity market and that this market could be worth $54 billion in sales by the year 2030. 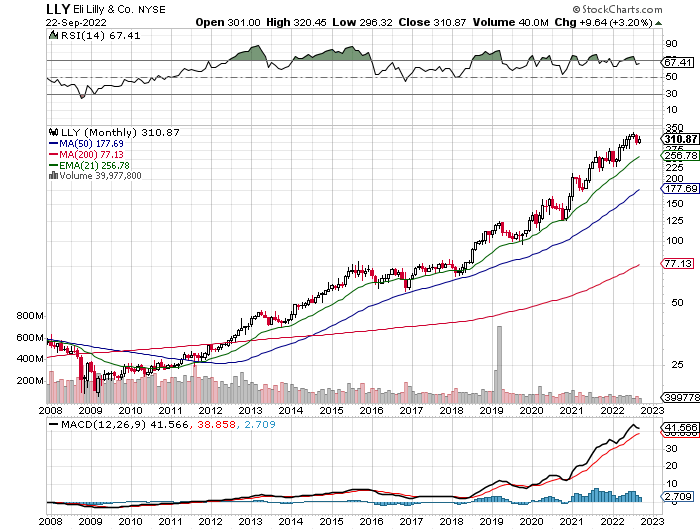 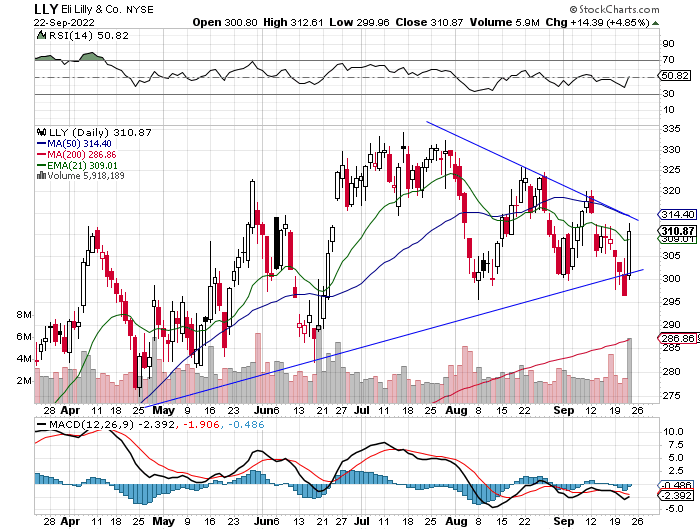 Before going for today, news broke Thursday night that the United States Air Force had awarded Raytheon Technologies (RTX) a $985 million contract to develop and demonstrate scramjet powered hypersonic cruise missile prototypes. The plan is to ultimately place an operational weapon that can travel at 5x the speed of sound on fighter aircraft for use in combat. Raytheon beat out both Lockheed Martin (LMT) and Boeing (BA) for this contract. This would be the Air Force's second hypersonic weapon, coming after Lockheed's ARRW, which is boosted into the atmosphere and then glides onto its targeted trajectory.

I have reinitiated RTX with a long position out of my oversize cash position after swapping RTX out of my portfolio this summer for Northrop Grumman (NOC) . I remain long both of those names as well as LMT and General Dynamics (GD) .

Note to Readers: I am trying to take next week off. Market Recon will not be published on Monday and maybe not all week.

There are no significant domestic quarterly earnings scheduled.