I know everyone is talking about how ugly it was for technology on Monday. Stop for a minute, however, and realize it was not that ugly for the mega-cap tech names.

Sure, beloved Nvidia (NVDA) was down ten bucks and Amazon (AMZN) lost 100 points, but come on, did it really change their charts? I mean Apple (AAPL) stayed green on the day. Microsoft (MSFT) was down a mere three bucks. And Telsa (TSLA) ? It was solidly green.

No, the ugliness came from the stocks that were already down. The likes of Square (SQ) . Or fan-favorite Crowdstrike (CRWD) . Or the continued weakness in PayPal (PYPL) . But we've talked about this before. The weak got weaker. These secondary names have not been playing along for some time now. That's why the number of stocks making new highs for Nasdaq turned pathetic. That's why I had said a week ago it was getting narrow even within technology. So Monday was a continuation of that weakness. It was only because we reversed from up to down that everyone decided to notice.

And, sure, we saw some selling in the Invesco QQQ (QQQ) . After all, the volume for the QQQs was the highest since late September or early October. At 60 million. it is verging on high; at 70 million, it's high. It can go higher of course, but once we get to that zone we know folks are dumping QQQs with abandon and that tends to lead to a bounce. 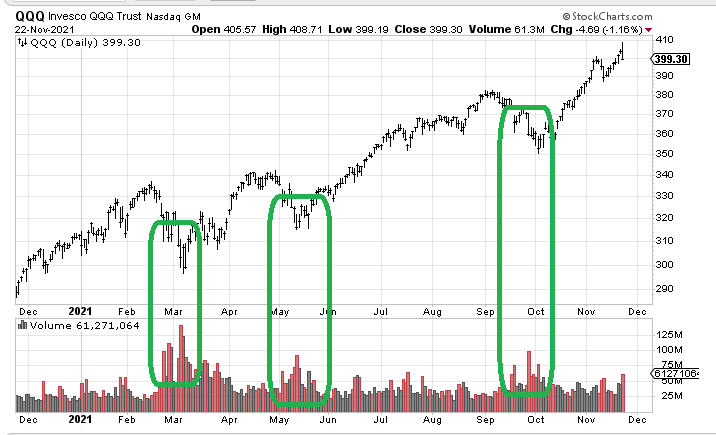 But using my own Oscillator we are now oversold. This Oscillator is based on breadth. Breadth has been red for the last six trading days and eight of the last 10 days. That's what makes this oversold. Lately in the either/or market that we're in, the overbought and oversold readings are more reflective of the Russell 2000 than Nasdaq.

Speaking of the Russell 2000, the Momentum Indicator is getting oversold. What I do here is I plug in lower lows daily over the course of the next week to find the point in time that the Momentum Indicator stops going down, and preferably goes up, even when price goes down. There is a minor uptick on Tuesday and then a better one on Nov. 29. This is not meant to find the exact day we get oversold, although it is nice when that happens, it is meant to give us a time frame to start looking for the condition to develop. 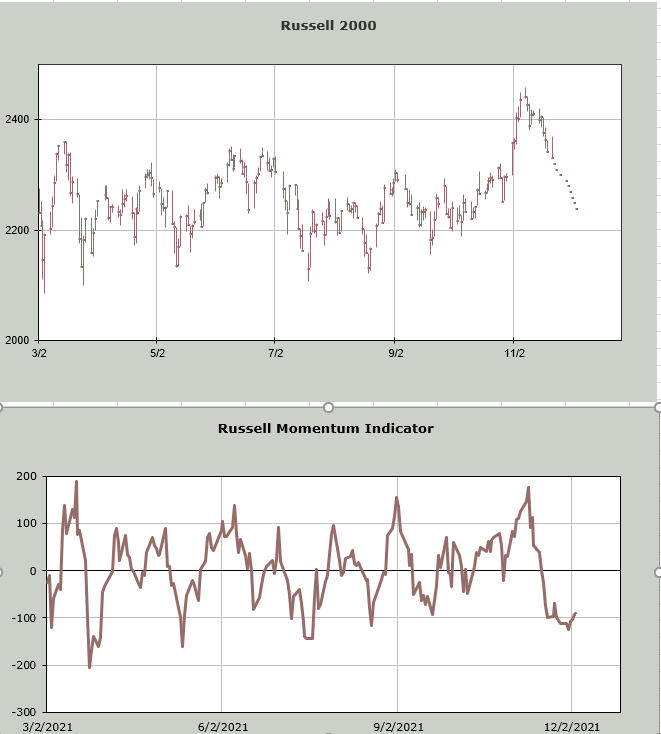 Typically when this I perform this exercise, I do the same procedure for Nasdaq, and the results are similar, but that is not the case right now. Nasdaq's price has not been trending down long enough for this to be in the same position as the Russell 2000. 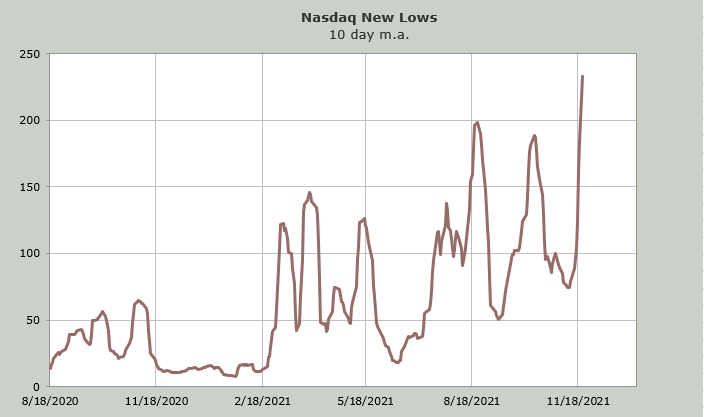 I've heard chatter that was more cautious than we've heard, but statistically the put/call ratio was a mere .81, which is pretty neutral. But at least small caps are oversold.