"It went many years

But at last came a knock

And I thought of the door

With no lock to lock.

I blew out the light

I tip-toed the floor

And raised both hands

In prayer to the door.

But the knock came again

My window was wide

I climbed on the sill

Back over the sill

To whoever the knock

At the door may have been.

So at a knock

I emptied my cage

To hide the world

And alter with age."

The end of the workweek, so we all can relax. Russia intensifies its airstrikes deep inside what is still Ukrainian territory. US officials show concern that North Korea has made great advances in that nation's military capabilities after two recent missile tests involving a newer system show evidence of progress. European Union leaders meeting at Versaille are "united" on Ukraine, but will not "fast-track" membership. The Securities and Exchange Commission named five Chinese companies, including Yum China Holdings (YUMC) , that could be delisted in the US for failing to abide by US accounting regulations. Lastly, it appears that in Vienna, talks between global powers and Iran in an effort to revive the 2015 nuclear accord have been paused.

In other news, there will be more consumer inflation, perhaps much more... and there will be baseball. Pitchers and catchers report on Sunday, and just like that, even if for the moment, there is joy in Mudville, as in this office as I write.

On Thursday morning, the Bureau of Labor Statistics published its February Consumer Price Index data. The CPI numbers were ugly, but not surprising. The fastest rate of accelerating prices since 1982. Again. Every single time, we see a new recent record for consumer inflation in the US, it's the worst we've seen since 1982.

I don't know, I was doing push-ups, digging foxholes and studying Soviet squad infantry tactics in 1982. How bad could it be? Isn't 1982 the year that Dave Kingman led the National League with 37 home runs while batting .204? Just an FYI... inflation hit 8.4% (on the way down) in January 1982 with the nation's economy in recession. Oh, yeah. That.

February CPI hit the tape at headline year-over-year growth of 7.9% and a mere 6.4% at the core. Both numbers landed directly on consensus view. On a month-over-month basis, headline inflation moved 0.8% higher, and 0.5% at the core. Interestingly, but not alarmingly (we'll save the alarm for March), gasoline ran 6.7% month over month, while fuel oil (I got that bill yesterday -- woo doggie) led the league with a 7.7% month-over-month increase. (My increase was a whole lot more than 7.7%. Just sayin')

Getting away from energy, prices are still rising at an uncomfortable pace, but the numbers are less fantastic. Food at home cost consumers 1.4% more in February than it did in January, but food away from home was actually a drag on inflation, up "just" 0.4% month over month. Eat out? Used car prices, while up 41.2% year over year (second only to fuel oil's growth of 43.6%), actually contracted 0.2% month over month, but not everyone buys a used car every month (or decade).

Everyone does buy electricity. Electricity prices decreased 1.1% in February. So all you have to do is only buy used cars and electricity and you're saving money, cowpokes. Fortunately, medical care commodities prices and medical care services prices seem to be lagging almost everything else. Huzzah.

Financial markets woke up in a bad mood on Thursday after seeing those February CPI numbers (knowing that March will be scarier) and after Ukraine/Russia cease-fire talks failed to make progress in Turkey. Equities hit their lows around mid-morning as the US 10-Year Note paid just a tick less than 2.02%. West Texas Intermediate (WTI) crude traded above $114 per barrel on Thursday, but also less than $106. The whole marketplace showed such volatility... or is it uncertainty?

More information? Sure. With the Philadelphia Semiconductor Index down 2.17% and the Dow Jones US Software Index down "only" 1.32%, how does the sector SPDR ETF end the session down 2.61%? Good question.

Thursday was that rare day where hardware led the sector.. downward. The Dow Jones US Hardware Index surrendered 2.55% (obviously these indices and the ETF don't exactly weigh things the same way) as Roku (ROKU) took a 5.7% beating followed by Synaptics (SYNA) , Logitech (LOGI) and our dear friend, Apple (AAPL) . Those three names closed down 4.3%, 2.8% and 2.7%, respectively. I am going to go out on a limb and say that of these four, Apple is probably where that extra weight came from.

-- The European Central Bank said on Thursday morning that it would wrap up its asset purchasing (quantitative easing) program sooner rather than later, and probably try to lift interest rates off of their zero bound later this year.

--US Household net worth, according to a report compiled by the Federal Reserve, increased 3.7% ($5.3 trillion) during the fourth quarter. The value of equity holdings increased some $2.5 trillion (probably not too close to that level now), while the value of real estate held by households increased by $1.5 trillion. Now, if you put on these ruby slippers and click your heels three times....

-- Both JPMorgan Chase (JPM) and Goldman Sachs (GS) are taking steps to pull back from their Russian businesses. JPMorgan has a very small presence in the country with a headcount in the low hundreds and did not list Russia as one of the bank's top 20 nations of exposure outside of the US. Goldman is also very small in Russia, supposedly having just $650 million of total credit exposure as of the end of 2021.

On Thursday night, DocuSign reported fourth-quarter adjusted earnings per share of $0.48. That met the consensus view and was good for earnings growth of 30%. DocuSign generated revenue of $580.8 million. This beat the street and showed 34.8% year-overy-year growth. Billings were up 25%. Subscription-based revenue was up 37%. Happy, happy?

Not exactly. DocuSign guided current quarter revenue toward $579 million to $583 million and full-year revenue toward $2.47 billion to $2.48 billion. The street was at $593 million and $2.61 billionon these metrics. The selling commenced, or rather continued overnight. The last sale I see for DOCU runs with a $77 handle, down more than 17% since the closing bell. 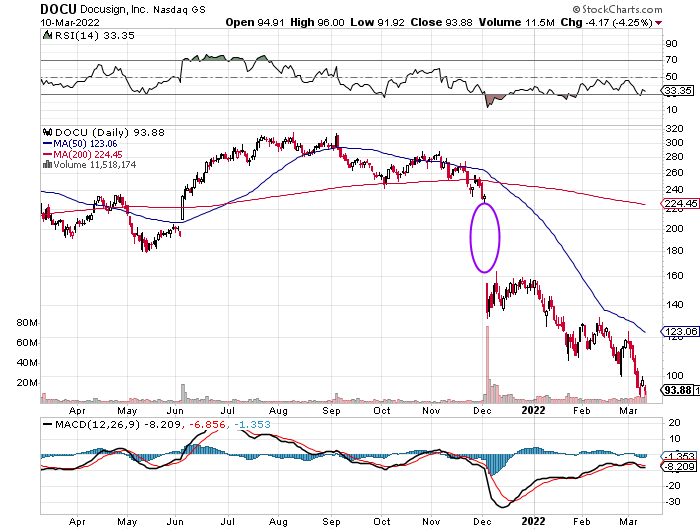 They say that gaps may not always fill, but they usually do. Just what do you make of that? I don't know if I buy equity on this selloff, but a long-dated, seriously out-of-the-money bull call spread if something like that can be had for the net debit version of a song? Definite maybe. Let's see where such calls are priced once that market opens. Ding ding.

What Can We Learn From Chegg's Charts?

Let's open the books and look inside.