Thursday's market action generated a mix of technical events as some new closing highs were achieved while one important index closed below its near-term uptrend line and is now in a neutral near-term trend.

While the charts have yet to register notable sell signals, the psychology data warning signals have turned red from yellow. Insiders have increased their selling to notable levels as the leveraged ETF traders extended their leveraged long exposure to levels seen four times over the past year of which three resulted in market corrections.

The equity indices closed mixed Thursday with positive internals on the NYSE and Nasdaq.

The S&P 500, DJIA, Nasdaq Composite and Nasdaq 100 (see below) closed lower with the Nasdaq 100 closing below its near-term uptrend line and now in a neutral trend as the rest remain positive.

Cumulative breadth remains positive as well for the All Exchange, NYSE and Nasdaq.

Yet with the shift in the Nasdaq 100, the charts remain generally bullish and lacking sell signals. 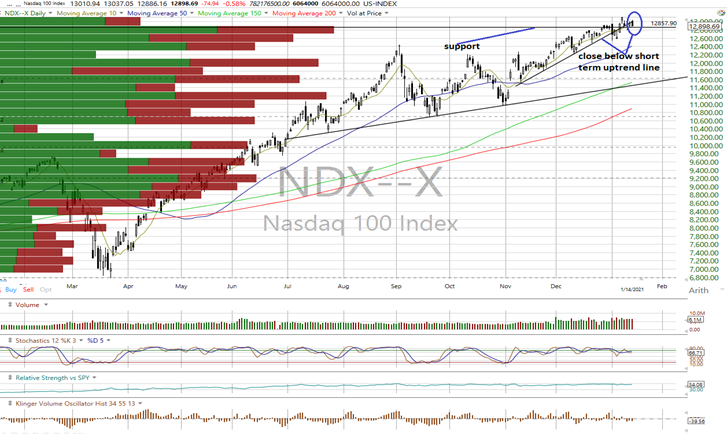 On the other hand, while the McClellan one-day Overbought/Oversold Oscillators remain neutral (All Exchange: +31.97 NYSE: +23.37 Nasdaq: +39.8), the sentiment data cautionary signals have turned from yellow to red.

The leveraged ETF traders, measured by the detrended Rydex Ratio (contrarian indicator), are now heavily leveraged to a very bearish 1.53. In contrast, insiders increased their selling activity, dropping the Open Insider Buy/Sell Ratio to a bearish 23.0. Throughout 2020, these conditions presented themselves four times, three of which were followed by market corrections.

Also, this week's Investors Intelligence Bear/Bull Ratio (contrary indicator) and AAII Bear/Bull Ratio saw a rise in bullish sentiment to 16.8/64 and 23.47/47.9, respectively, leaving both on bearish signals adding to the warnings from the insider/Rydex message.

Valuation continues to appear extended. The forward 12-month consensus earnings estimate for the S&P 500 from Bloomberg dipped to $166.9 per share, leaving the S&P's forward P/E multiple at 22.7x, while the "rule of 20" finds fair value at 18.9x due to the recent rise in the 10-year Treasury yield.

We are changing our near-term market outlook to "neutral/negative" from "neutral" as the psychology data suggests the likelihood of a market correction has increased to prescient levels.