It seemed too easy. A broader market rally that stretched from Wednesday afternoon into Thursday morning was, in the end, nothing more than the high end of "more sideways." Trading volume dwindled at both of New York's major exchanges. Still, negative volume decisively outweighed positive volume both down on Wall Street and up at Times Square.

I think Helene Meisler of Real Money led off her evening note perfectly on Thursday. Helene wrote, "Those who are bullish will say this is good, that we are consolidating at the highs. Those who are bearish will say we're churning at the highs and we can't get through." Helene is spot on. Speaking to individuals whom I consider to be smart people on Thursday afternoon down at the trading floor of the New York Stock Exchange, I heard those two opinions argued in precisely that manner. Perhaps we have the same friends.

In recent days here at Market Recon, we have profiled with mixed results several names that appeared poised to at least approach pivot and possibly break out, such as Microsoft Corp. (MSFT) , Northrop Grumman Corp. (NOC) and ZTO Express Inc. (ZTO) . NOC may have hit resistance at the level while MSFT and especially ZTO possibly may be making some hay.

Another Sarge name, one I haven't spoken about or written on in quite some time, now threatens to the upside coming out of an awkward double bottom (I think). It's mortgage insurer Essent Group Ltd. (ESNT) . The stock traded back to my pivot on Thursday on increased volume.Take a look. 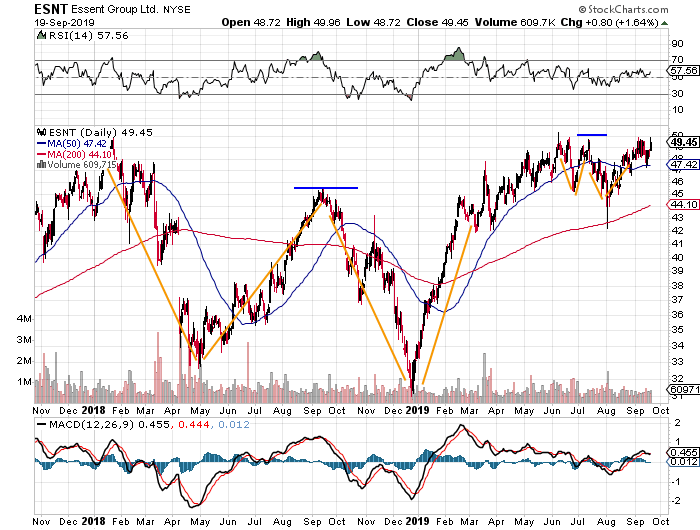 Some readers may recall that we spotted this stock approaching a pivot coming out of a sloppy-ish double bottom last spring. There was certainly some back and forth, but that position has performed. A trader who moved on the original break off of that pivot ($45.50) has realized at this point 11% in ESNT, while the S&P 500 has returned 8% and the Financial Select Sector SPDR ETF (XLF) has gained 7%.

Let's zoom in on the recent action. Am I seeing another sloppy double bottom? 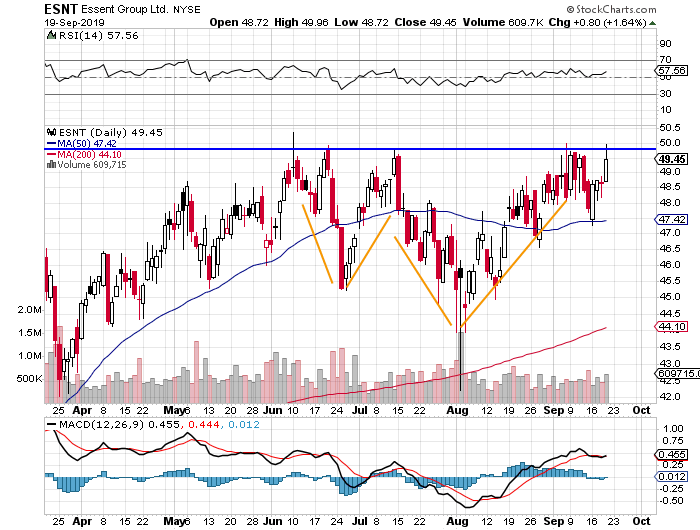 I am not sure. Granted, I have discounted the extreme low of Aug. 2 as that day ended up being an up day. Still, if what I see is what I think I see, then the $50 level would be the new pivot, and these shares are once again knocking on that door after literally testing the spot for much of early September. I remain long these shares. My target price is $60, but I'd settle for another pedestrian 10% move.

One thing has become crystal clear this week. A long period of quantitative easing (QE) followed by a short period of quantitative tightening coupled by a severely over-regulated banking industry have left the New York Fed with literally no idea what an appropriate level of reserves available for overnight money markets might be.

We know that the level of reserves that private banks hold at the Fed has run at a rough $1.3 trillon to $1.4 trillion over the course of this summer. Out of that, maybe $1 trillion is tied up, meaning it is required in order to meet these regulatory and other needs. The "excess" of $300 billion to $400 billion now appears to be too small to absorb an increase in Treasury debt issuance, quarterly tax due dates and a potential price shock (short squeeze) in oil futures markets, or at least not all three at the same time. This is assuming that nobody is bleeding out beneath the radar here.

It would make sense to me at least for the New York Fed to set up a more permanent repurchase facility than to make like the little Dutch boy standing in front of the dyke trying to plug leaks every night as demand punched a $20 billion hole in available cash over three days. The other option, and this one is bandied around Wall Street, would be a methodical expansion of the Fed's balance sheet through asset purchases that increase the asset side of the balance sheet and by design would drag higher over time currency in reserve, and perhaps even currency in circulation. This program would run silently in the background. (I could have sworn I've heard that one somewhere before.)

The important distinction likely to be made by the central bank would be that the intent is to alleviate the potential for gummed-up liquidity in money markets and not for the sake of stimulating the economy. Therefore, though the operation may look and behave in the same way, this will not be termed "quantitative easing" as those words come with a negative connotation attached, not to mention the ability to falsely impact markets, especially with keyword-reading algorithms in control of the point of sale. The program, which is not yet a reality, but one might guess is under discussion, is referred to as "Permanent Open Market Operations," or POMO for short.

The Wall Street Journal reported on Thursday evening that the Pentagon was now considering sending increased military assets to the Middle East in response to last weekend's terrorist attacks on Saudi Arabia's oil production infrastructure. It appears that officials at U.S. Central Command (CENTCOM) have been in meetings through Thursday and into Friday in order to decide just what is to be positioned where.

The thing being considered would likely be the sustained presence of an aircraft carrier escorted by several destroyers, along with Patriot anti-missile batteries, manufactured by Raytheon Co. (RTN) . Raytheon, by the way, was upgraded at J.P. Morgan this week and downgraded at Bernstein. Raytheon also agreed to merge with Untied Technologies Corp. (UTX) last June in a deal that has yet to be completed.

In addition, the Pentagon will likely deploy a THAAD (Terminal High Altitude Area Defense) System, and a squadron of F-22 fighter aircraft. THAAD is capable of intercepting ballistic missiles across a wide area prior to impact. The prime contractor for this weapon is Lockheed Martin Corp. (LMT) , though the radar for the system is designed by Raytheon. Boeing Co. (BA) is also a key subcontractor.

The F-22 Raptor is also a Lockheed Martin product, capable of providing enhanced electronic warfare and intelligence capabilities in addition to the more ordinary things that fighter aircraft do. Boeing is a key subcontractor here as well.

One thing is certain. Geopolitical risk is not going away. The hardware that serves as a deterrent is likely on the move.The stuff is expensive and in need of constant modernization. As long as the U.S. has an administration that understands this, the space is one that investors cannot ignore.

This is the most interesting thing that I saw anywhere in the marketplace on Thursday. The 24 million shares in Datadog's IPO were priced at $27, well above the range, and traded as high as 41.44 before closing at $37.55. We've seen wild trading in new issues before, but the interest shown by Cisco, which reportedly made a play for this name, is what's key.

What does Cisco do now? Datadog closed at a market cap ($11 billion?) seemingly out of Cisco's supposed ($7 billion?) price range. Was the interest specific to DDOG, or is Cisco interested in adding "big data"-targeted subscription software revenue where it can get it? (Cisco is a holding of Jim Cramer's Action Alerts PLUS charitable trust, BTW.)

Datadog peers were all on the rise on Thursday. Splunk Inc. (SPLK) ran 5.6%, New Relic Inc. (NEWR) rose 4.5% and Elastic (ESTC) scored a 2.4% gain. Of these I like Splunk the best, but that firm would be more expensive than Datadog, and none of the three would get a passing score when measured against "The Rule of 40%."

There are no significant earnings scheduled for today.