If you can keep your head when all about you
Are losing theirs and blaming it on you,
If you can trust yourself when all men doubt you,
But make allowance for their doubting too;
If you can wait and not be tired by waiting,
Or being lied about, don't deal in lies,
Or being hated, don't give way to hating,
And yet don't look too good, nor talk too wise:

--Excerpted from the Rudyard Kipling poem, 1910.

I struggled on Monday night, as I worked my way through my usual chart work. Had the major U.S. equity indices challenged their respective 50-day simple moving averages or not? The answer is not really. Why would this be such a magnet for my focus? The S&P 500 (+1.2%) has hit stiff resistance at that line on each of the last three attempts made, all since August 8. The Nasdaq Composite (+1.4%) has on occasion been able to pierce, but not hold, that particularly important moving average on each of those same three occasions. Instead, with the apex of this climb in sight, equity markets suffered a somewhat sharp bout of profit taking into the closing bell.

Just who made those late sales that pressured market performance as the final bell tolled? Breadth had been solid, though trading volume declined. In fact, volume declined for a third straight day, all up days, that came off of the intense sell-off experienced last Wednesday. Our broadest indices now stand at levels not seen in nearly a week's time (ooh, ahh). The implication would be that the funds have participated to a much lesser degree over the past three days than they did on Wednesday.

There are two possibilities that I take away from the action. That late profit taking may have been algorithmic fund participation that simply kicked in once the 50-day lines were in sight and preferred prices reached. That would be bearish. The other possibility is that those who lightened up have held back over last few sessions -- and if that line is taken, will be forced to re-enter. Not only would this be short-term bullish, this would likely cause a tradeable pop.

How would you like to play the players? Just need a few more points in these indices (that we may not get, equity index futures are slightly lower overnight) to try to provoke their own algorithms.

All eleven sectors worked their way well into the green on Monday, led by energy. Transports were strong. Small-caps were strong. Spin the wheel, you probably won something. Within the tech sector, though, the semiconductors were hot, really hot, even as an industry outperforming the leading energy sector. Why? Simple. The Trump administration has agreed to permit U.S. companies an extra 90-day window to continue to do business with Chinese telecom/5G giant Huawei Technologies. The question now becomes how much in the way of equipment can these firms sell in three months?

Does this mean that there is some kind of thaw in U.S. / Chinese trade relations? Is this olive branch simply some kind of trade-off meant to slow down possible military intervention in Hong Kong?

My own opinion is that the latter is far more likely than the former. I really don't see anything in the way of overt Chinese concession on key issues that would lend sentiment toward potential agreement anytime soon, certainly not before the 70th anniversary of Mao Zedong's victory over Chiang Kai-shek in October. That said, I do not think that televised scenes of Chinese troops moving on pro-democracy crowds waving American flags would do very well in the way of normalizing trade.

Two other "fanciful" policy ideas made the rounds among financial journalists on Monday. First, President Trump tweeted out (ahead of the Jackson Hole symposium) a call for a 100 basis point (one full percentage point) reduction to the Fed Funds rate, while resuming quantitative easing. Though taken seriously by some, I think observers must understand that in negotiation, one asks for far more than they will eagerly settle for. I can't speak for the president (obviously). That said, I think it likely written in stone that the Fed will cut by 25 basis points on September 18. The president might be trying to prod a 50 bp cut to the FFR out of the FOMC.

That's not as crazy as it sounds. Remember, I have been advocating for a 50 bp cut as well as initiating purchases at the short end of the curve, while selling the long end in the open market. I have also stated quite often that this is not about economic performance, this is about repairing the yield curve, and keeping U.S. dollar valuations in check. Yet, every day, we hear from other economists and market participants who will still tell us that the economy does not need a rate cut. Well, no kidding. It's never been about that. It's about recognizing the environment and best defending the American people in that given environment.

The other issue is the idea of the U.S. treasury going out on longer maturities than the 30-year bind when borrowing. This is another area where I think it necessary to consider maturities of forty-to-fifty years.

Apparently, the idea of a "century bond" has met a cool reception on Wall Street. I can see that. No sentient being wants to intentionally hurt future generations. There is thought that this may become necessary in time, to push large chunks of refinanced debt into a distant future.

The problem then might become simply more addiction to what seems like free money in the present. Free money that will force the debt-driven Keynesian Multiplier to lose even more effectiveness than it already has, and perhaps even act as a growth inhibitor. The national debt-to-GDP ratio is already at levels that should make the public uncomfortable.

However, we already know that the ECB steps to the plate six days ahead of the FOMC meeting in September. Best to pass judgement until we witness what changes in ECB policy do to the long end of the U.S. curve.

I know there is concern out there regarding the sharp reaction to the Monday downgrade in Zscaler by OTR Global from "Mixed" to "Negative." OTR Global questions the firm's growth performance as competition in cybersecurity grows.

By traditional metrics, ZS is clearly overvalued. This is a speculative play on rapid growth. Always has been. You know that I think that corporate America will spend on cybersecurity in good times or bad. They really have no choice. I like Zscaler as a significant provider of "zero-trust" cloud-based web security gateways.

Let's not forget that about a month ago it was reported that Zscaler revealed that 22% of the data traffic that is secured through the firm's global data centers is attributed to Microsoft's (MSFT)  Office 365. This percentage had grown tenfold over three years.

The firm has sustained 50% to 60% year-over-year revenue growth for each quarter for at least two years (before going public in Spring of 2018). The rate of growth is expected top slow to roughly 47% for the quarter to be reported on September 10. 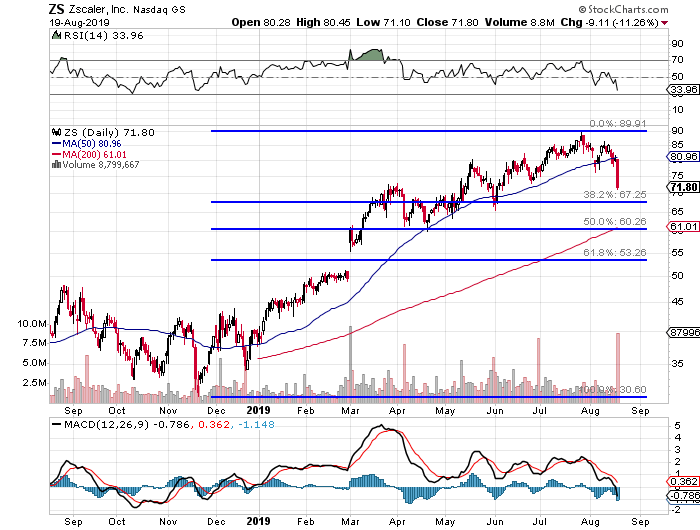 I think the most significant takeaway from Monday was how fast the funds seemed to lighten their positions once the 50-day SMA broke for keeps. The Fibonaccci model allows for prices as low as $67.25 before an attempt at support might be made.

Oh, there is another factor. Short interest. Now, 11% of the entire float (60.3M shares) is held in short positions. Speaking as a trader with a long position, it might not take much for some of these shorts to feel like they may have missed the bottom if this name makes a stand somewhere in here.

Yes, I did add a tranche to my long on Monday. I sold $72.50 puts that expire this Friday as well, so I do have some equity risk on the table here. My target price has been $90. Obviously that level will come under review. My panic point for the name is a cool $64. That's where my 8% rule comes in.

Get an email alert each time I write an article for Real Money. Click the "+Follow" next to my byline to this article.
TAGS: Earnings | Economy | Federal Reserve | Investing | Markets | Politics | Stocks | Trading | Treasury Bonds | U.S. Equity