I had to look it up. I mention Amazon (AMZN) so often in my Market Recon column that while I know my target prices and panic points (only because I write them down), I don't remember when I took certain stances in any given names unless I search for them. This Monday morning, Amazon confirmed that the undisputed king of e-commerce will indeed hold its annual Prime Day event Oct. 13 and 14.

Readers will recall that Amazon, as well as its closest competitors at Walmart (WMT) and Target (TGT) , all had to take measures to reduce consumer demand back in the panic of the spring/early summer. Hence, key promotions such as Prime Day were reeled in. They have all caught up now. Your packages have been arriving on time or close to it for a couple months now.

In a column on Amazon for Real Money back on July 10, I praised the e-commerce operations of both Amazon and Walmart for getting my family through the depths of the pandemic in the New York area. Truth is I was sick, people were stuck inside and we would not have made it without the support of those two businesses. At that time Amazon was trading at $3,182. I acknowledged that my target price of $2,970 had been easily overrun and that I was working on new numbers. I said then that I could see the shares trading as high as $4,000, but that I thought they would trade as low at $2,800 first. (BTW, Amazon is a holding of Jim Cramer's Action Alerts PLUS charitable trust.)

On Aug. 19, in Market Recon, I finally moved what was a new price target of $3,300 up to that $4,000 level while leaving my panic point at $2,700. The shares did trade as high as $3,552 on Sept. 2 and as low as $2,971 last Monday. I tried to add at $2,900 last week, only to swing and miss. Nevertheless, Amazon remains my second-largest net long position, and No. 1 is more of a trade, so technically Amazon is my largest net long investment. Because two or three readers would have emailed and asked, Tesla (TSLA) is currently No. 1, but that is already a large winner and its size is temporary.

Why am I long so much Tesla? No. Most of that was just a trade in addition to a small core position that actually is an investment. Why is Amazon an investment even though my position size is large-ish? OK, good question.

There is risk. The valuation is elevated even compared to the rest of this marketplace. Deservedly so, in my opinion. Amazon dominates, and I mean dominates e-commerce. Sets itself up for increased competition? Maybe. E-commerce is a low-margin business? You're right, it is. It also drives the bus.

E-commerce is the engine behind Amazon's advertising business, which is growing and highly profitable. The firm also leads the public cloud space through Amazon Web Services (AWS) despite key competition from the likes of Microsoft (MSFT) and Alphabet (GOOGL) . This is another high-margin business.

I also like Amazon's aggression. They see a business, any business, they spend in order to compete in that business. Groceries, for instance. A lineup of gadgets meant to improve the intelligent home. Delivery down to the last mile. Really anything.

This spend- to-disrupt mentality might be seen as risky, but from where I stand Amazon has this tactic down pat. It can put any firm in any business in a bad spot just by showing an interest. The Evil Empire? Not if you're on the team. Learned that the hard way.

This year's Prime Day event launches at midnight, Oct. 13 and runs through Oct. 14. That this event comes in support of Amazon's recently announced, later-generation smart home devices is no coincidence. In addition, Amazon is offering Prime members a $10 credit for purchases from any small business using the platform from the other side. Earnings are not due for another month or so, and remember that Amazon has been cautious on profitability, placing priority upon safety for employees and clients. Just because Amazon blew away projections for the second quarter promises nothing for the third quarter. Volatility in the share price is a given.

I have shown you the classic breakout from a traditional cup with handle pattern in this name a number of times. Here's a different perspective. 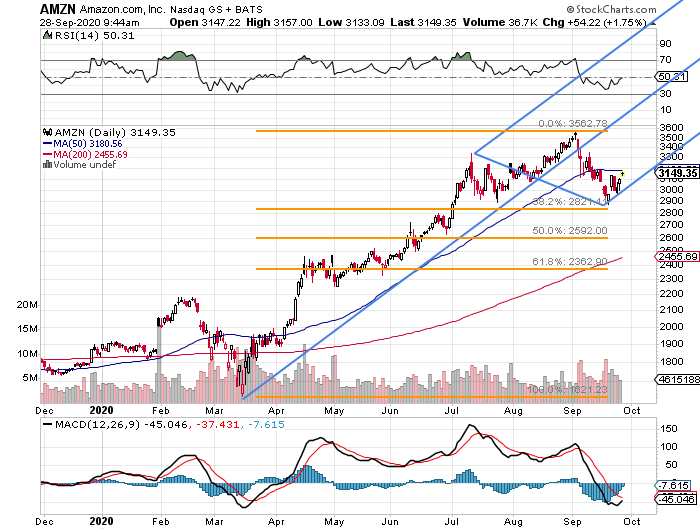 One can see that these shares bottomed out at a standard 38.2% retracement on Sept. 21. If this low does end up holding, the stock now builds a Pitchfork that could get the shares not just to the recent high above $3,550, but closer to my target, which is still $4,000. The key is that darned 50-day simple moving average (SMA). AMZN is scraping up against that spot (as resistance) here on Monday morning.

Take and hold? Then we're on our way. Failure? It is indeed an option. Busy week ahead. Busy season ahead. The economy will fluctuate in response to the issues at hand. I have my doubts that the public's reliance upon Amazon will.