The Vice Presidential Debate? No, though not likely changing a single vote, at least that was somewhat closer to what we as viewers expect from a political debate.

Something somewhat closer. I am talking about financial markets, which is really why I am here in the first place. Volatile? You might say that. Even the volatility, though, appears to be developing a bit. Everyone seems to watch the VIX, The VIX currently tells us that there is a higher chance of some increased (but not really out of control) volatility over the next month or so.

The fact is that VIX futures are pricing in the most volatility (and on the most volume) through mid-November, and then it dries up. VIX futures seem to be showing continually less volatility beyond that, and much less after December. In other words, the markets are starting to doubt a seriously contested election. I think.

Backing up that idea, Put/Call ratios are well off of their most extreme levels as well. While the CBOE's "index only" Put/Call ratio is "just" off of recent highs.

The CBOE's "equities only" Put/Call ratio has simply crashed in recent days, now landing well below key technical averages approaching its lowest level in more than a month. Take a look at this:

There is more to this story here. We already knew that President Trump had called off further negotiation on stimulus with Speaker Pelosi. The market took this very hard on Tuesday. The president's plan was to go it alone for now, challenging legislators. (The two sides are of course still talking.) He would send Americans a second round of helicopter money, rescue those about to lose airline-related employment, and beef up the PPP program meant to support small business employment. The message? He can save us, even after being stricken with this virus.

Markets appeared to react very well to this approach. If, indeed that is what markets are pricing in. I am not the brightest kid on the block. Well, maybe I am on my block, but you know what I mean. I am not so sure what exactly is being priced in. I do know that technically, this is still a tug of war centered on a multitude of 50-day simple moving averages.

As the World Turns

While equity markets have for the most part, played a game of daily give and take, the U.S. Dollar Index, while moving around, has remained rather stable. Too heavily weighted against just the euro, you say? You would not be incorrect, but the Wall Street Journal's Dollar Index presents a similar daily chart.

Now, take a look at the U.S. 10-Year Note. Yields are off of their overnight highs, but are seriously elevated from just a week or two ago (in percentage terms). Don't watch this stuff? I really would not know how to make a living trading equities without looking at stocks through the prism of the entire financial marketplace. This game is about a lot more than just technicals and fundamentals. Those who only make use of one discipline, or even just a blend of the two really do put themselves at a disadvantage.

Now, we know that the most important indicator we have of either economic growth, and/or inflation over the next six to 12 months are spreads between short-term and longer-term interest rates, or yields. Some economists watch the spread between the 2-Year Note and the 10-Year Note. That spread is not useless, it's just that 2-year paper is not truly short term.

We know that the spread that best predicts future economic conditions (to include the recent recession) has been and is the difference between what 90-day T-Bills pay and that 10-year note offers. The San Francisco Fed has even published research supporting this. Not that I take their word as law, but it does support this truth.

Now, take a look at the movement in the spread between what the "Three Month" and the "Ten Year" have yielded since late September: 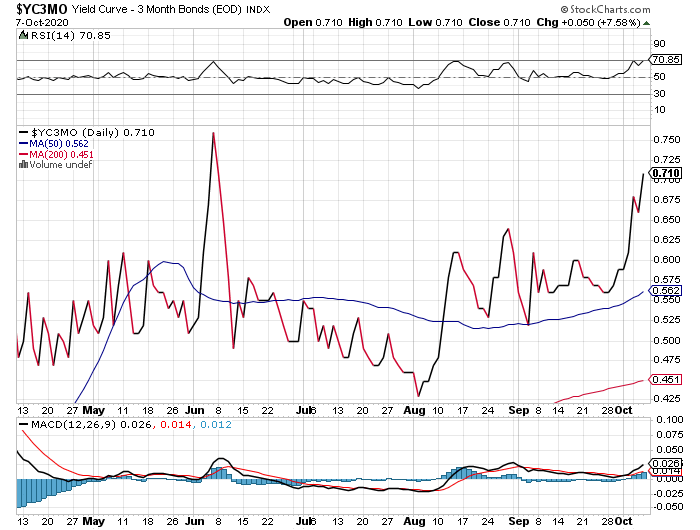 The fact that this is not the lead story on every financial news show is telling. Either many involved in these programs either lack a basic understanding of economics or they expect that the public does.

This action tells us that markets are pricing in a significant increase in fiscal support/stimulus. Whether that comes now, after the election, or after Jan. 20, it comes. Of course, while a "blue" electoral sweep by the Democratic party across the executive and legislative branches of government would bring expectations of an increased regulatory environment, as well as higher taxes, and these factors would be extremely harmful to business, such a sweep would also likely usher in far greater public spending than than might occur under any other circumstance.

These markets are pricing in support/stimulus. Markets may very well be pricing in this blue sweep as at least a short to medium-term positive. As we have mentioned in the past, while this would certainly evolve into a change in market leadership, this does not mean that those in our line of work cannot adjust and adapt. We will rotate if we must. We have a choice.

As individuals, vote for whomever it is that tickles your fancy. As an investor, you are mercenary in nature. Never forget that. Your side wins? Congrats. Move on. Your side loses? Sulk for 30 minutes. Move on. Politics and success must be compartmentalized in your brain in order to attain some level of success.

...Succeed in any environment. I promise. I have traded through the Carter (with my Dad's help), Reagan, Bush I, Clinton, Bush II, Obama, and Trump years. Have I had bad years? Of course. Have I had a lousy four to eight-year windows? No. I would be lugging 80-pound bags of cement for a living if that were the case. Or maybe digging foxholes in North Carolina.

These administrations brought many varied approaches to policy. Yet, the vast majority from both sides have been good to the marketplace. Understand. Identify. Adapt. Overcome...repeat.

1) The cycle continues. Wednesday's session brought another day of upside performance (bearing impressive market breadth) for the major (as well as narrow) indices on lower trading volume than we have experienced on "down" days. This constant scar on otherwise supportive behavior does not allow us to proclaim the market's uptrend to be fully (or back) intact. This rally is unconfirmed in my amateur opinion. However, keep going. There is reason to believe that I will have to confirm soon.

2) The S&P 500 has now hit resistance at or close to 3420 twice this week, as well as four times in September. The index closed at the top of the range on Wednesday (3419). With equity index futures trading higher overnight, market behavior Thursday morning could be a big deal.

In fact, we could see the creation of a "head-and-shoulders" bottom that Helene Meisler shed a spotlight on in her "Top Stocks" column last night. Any trader not following Helene there and here on Real Money does so at their own risk.

3) The Dow Transports are now trading above that average's 2017 and 2018 highs. Who says it's been a little while since we've seen new record highs?

With the airlines heating up, we have one right here. Oh, the rails are hot too. So is trucking. So are delivery services. Still think there's no federal spending on the way?

The Federal Reserve released the Beige Book on Wednesday afternoon. This was not even close to the most important documentation published by the central bank for the day. OK, we get it. Those comprising the FOMC don't quite understand how to guide forward on outlook. How could they? They are fighting with one hand tied behind their collective back.

The Fed also released monthly Consumer Credit data for August, which would be just after monthly jobless benefits got a bit wonky. The headline number for the extension of consumer credit for the month was $-7.2 billion. This was well below expectations of "growth" of $14 billion. This was the first negative print in three, and the fourth in six. Non-revolving credit actually did grow in August. That number is comprised of things like auto loans and student debt. Revolving credit experienced a decrease ($-9.4 billion) that was greater in magnitude than the headline print.

Get an email alert each time I write an article for Real Money. Click the "+Follow" next to my byline to this article.
TAGS: Investing | Markets | Politics | Stocks | Trading | VIX | U.S. Equity | Coronavirus