In his second "Executive Decision" segment of his Mad Money program Tuesday night, Cramer sat down in person with Jack Hartung, CFO of Chipotle Mexican Grill, Inc. (CMG) , the restaurant chain that sells upward of 600,000 orders of guacamole every single day and one that could be impacted by new tariffs with Mexico.

Hartung explained that despite half of Chipotle's customers ordering guacamole, the proposed tariffs on Mexican avocados will have a minimal impact on Chipotle's bottom line. When asked about what's driving their business and helping them to achieve five consecutive quarters of accelerating growth, Hartung said that delivery is one bright spot. Delivery is a "big deal" for Chipotle and the company still has plenty of room to grow.

Before I get hungry, let's check out the charts and technical indicators.

In the daily bar chart of CMG, below, we can see that prices are trading below the cresting 50-day moving average line. The $675-$725 area looks like potential resistance.

The daily On-Balance-Volume (OBV) line is "rolling over" the past two months, which is a change from the uptrend from late December -- not a big surprise in that prices have nearly doubled in about four months.

The trend-following Moving Average Convergence Divergence (MACD) oscillator crossed to a take profits sell signal in early April and recently moved below the zero line for an outright sell signal.

In the weekly bar chart of CMG, below, we can see that prices have rallied sharply from an early 2018 low. Prices got extended above the rising 40-week moving average line in 2018 and prices corrected. Prices are again, in my opinion, extended above the 40-week average line. Another correction could be unfolding now.

The weekly OBV line has declined the past two months and suggests that sellers have become more aggressive. The weekly MACD oscillator has crossed to a take profits signal.

In this Point and Figure chart of CMG, below, we can see a potential downside price target of around $590, but there is not a lot of support in that area so a deeper decline is possible. 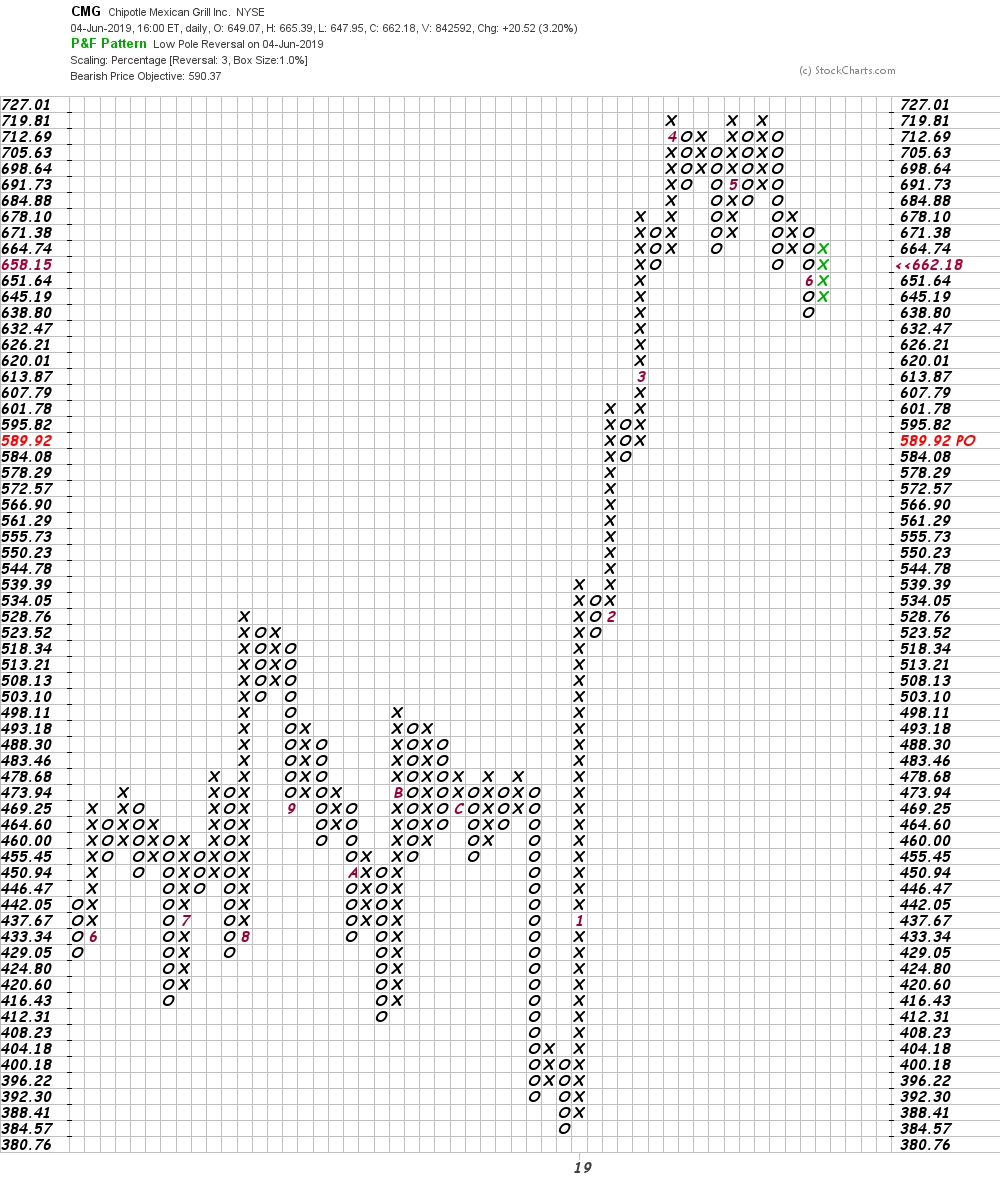 Bottom-line strategy: The fundamentals are one thing and the charts are something else. The charts will discount the fundamentals three to six months in advance. Maybe the weakness in CMG the past month is telling us something. Protect long positions.

Get an email alert each time I write an article for Real Money. Click the "+Follow" next to my byline to this article.
TAGS: Investing | Stocks | Technical Analysis | Restaurants | Mad Money | Executive Interview