So, it is that Monday might be a federally recognized holiday. The drum beat of quarterly earnings releases is now well past peak. Both corporate earnings and revenue are ahead of broadly optimistic expectations. Yet, my friends, there remains a disturbance in the force -- actually several disturbances in what should be a calming period. You know what they are. They seem omnipresent. That said, the monthly macroeconomic calendar heats up again by Wednesday of this week. Inflation, Retail Sales, and Production will all come back into focus. Expectations are that Retail Sales show some life after a couple of months where that was not the case, at least not on a month-over-month basis.

Consumer Prices will likely show some movement at the headline level, given that WTI Crude futures for December delivery started the month of October priced at close to $75 per barrel and finished the month at roughly $65, before heading even lower in November. Our hope is that those at the FOMC (I am currently tracking 12 public appearances by Fed officials this week.) will realize that inflation remains possibly more stubborn than they think, and had been reborn largely of volatility in the oil patch, as well as downward pressure on profit margins.

That, in itself, is a by-product of tensions over trade. Not one of us know whether this condition will be short term, long term or something in the middle. What we do know is that several high-profile corporations have started to figure out what to do with their supply lines. Once that business is forced to leave China, it's not coming back. Ever. President Xi Jinping is under a lot of pressure to end this trade war amicably too, despite a president-for-life status. In the meantime, we wait.

I have instructed you in the past, and I think it bears repeating, as I often have to remind even myself. The most consistent, time-tested method for surviving the marketplace when you are unsure (and when are we sure?) is through discipline. While a reckless trading style will allow for the occasional home run, the occasional home run will breed a reckless trading style. The trail behind us is littered with bull market traders. Understand?

There are some musts that a retail trader intent on market survival needs to implement into their individual lifestyle. There are other opinions out there, so I do not claim to have cornered the market on getting by, I just know that I have consistently gotten by -- and that I have a particular trading style.

No shot taking. We don't do that. We have a reason that we could explain to a child for everything we do. Target prices, panic points. Could anything be simpler?

Still, many traders that I speak to have failed themselves on something so basic. Learn to create your own levels -- and then respect your own levels. I have not known how to trade like this all my life. It took a few really stupid trades in order to realize that my risk management skills were less than skillful. Nothing teaches the individual how to fight better than getting beaten up.

I try to teach not out of arrogance. Please understand that I teach from experience. I have both excelled and failed to extremes. The Elite will never be my people. You, who are honest to yourself and show up for a fight even when the odds are stacked against you. You are my people for life. Together, we will face hardship. Together we will encourage evolution of thought. There can be no victory if the slowest among us falls way behind. None.

October was really something. Early November proved no better. Russian oil production has reached its highest levels since prior to fall of the Soviet Union. U.S. production hit 11.6 million barrels per day last week, a new record. OPEC, the Saudis in particular, have been pouring it on as well. The result? Not too hard to figure out, at least not in hindsight.

With inventories seemingly in a constant state of growth, WTI Crude entered into a bear market all of its own, despite Iran being put back in the penalty box. Never mind that eight jurisdictions that included both of Iran's best customers (China and India) were granted temporary exemptions from these sanction.

Leading oil producers met over the weekend. The topic that will now allow for short-term manipulation of market prices for oil is that OPEC, basically led by the Saudis, might consider lopping about a million barrels worth of daily production off of the top when they meet formally next month.

The catch is this. Russia is not technically part of the cartel. The Russian economy is still heavily dependent upon oil in order to balance the budget, and according to the Wall Street Journal, Russia only needs $53 a barrel to balance the budget -- and that break-even point is only headed lower. Russia may not play ball, or may try to extract some kind of concession in order to do so.

In the meantime, what to do with energy stocks. Nothing has really worked all that well. I maintain long positions across the space, as this group is a key component of my dividend book. These names are not really hurting me, but are almost all back near net basis. One name that has hurt me is Schlumberger (SLB) . That position is now about as small as I am willing to take it, after being forced to reduce once my $55 panic point was breached in mid-October.

My primitive thought process on the energy space is that you do need exposure as long as the dividends are safe. I believe for the major players, as the producers increasingly make use of newer technologies in order to drive down break-even points, that oil services will halt their slide. I have been wrong on oil services in the past, so follow along only cognizant of that fact and with a personal sense of caution. Now, refiners may have also bottomed (just an opinion). With the spread between Brent and WTI reaching obscene levels, a trader might expect increased demand for the cheap stuff, and an inherently larger vig to be created somewhere in the middle.

If you follow regularly, then you know that we have been out of Valero (VLO) for some time. The name reported a solid quarter. Cash on hand has been in decline, while total debt has been expanding. I want you aware of that. The balance sheet is neither a fortress nor overtly alarming, in my opinion. Other fundamental signals are benign in nature. Cash flows are solid, the short position is not significant enough to artificially impact market pricing. The name runs with a healthy current ratio. The quick ratio is slightly below what I like to see, but this is an oil company. Inventory levels must be maintained. 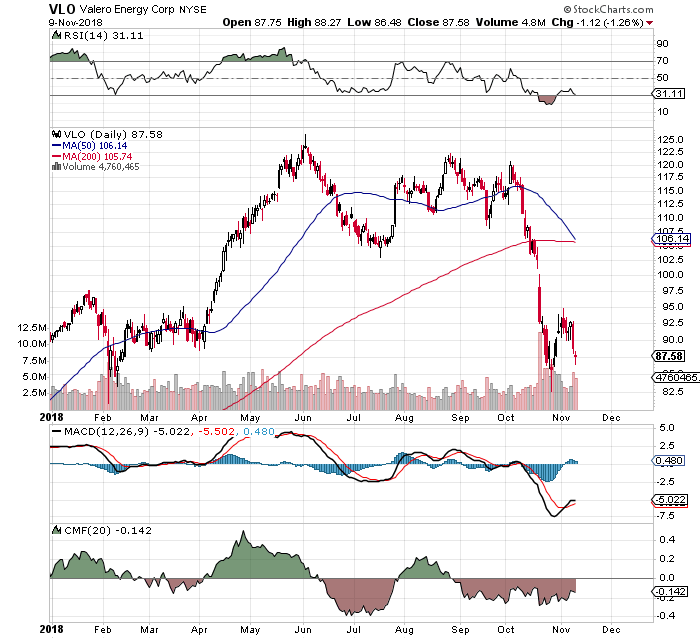 There are red flags here, so proceed slowly. While some see a double bottom as a positive, others will look at this chart and see an inverted cup and handle pattern. That's bearish, and considering where the stock has come from, would imply much lower prices. Yes, this is a risky sport. Just to add a little more negative pressure from a technical view, Money Flow is awful and the shares stand at the precipice of a much feared "Death Cross." So, why go there, Sarge? Why bother?

For one, my opinion over multiple decades is that news events always trump technical analysis. Always. Obviously, the energy story is at one of those points where the fundamental story could be about to change. I'm not going to risk the rent money here. I am going to lead in with maybe one-eighth of my intended position size. Why, gang? Discipline, right? Never all in or all out at one time. If I'm wrong, Valero (VLO) pays shareholders 3.6% just to own the shares. Not bad at all.

For the kid, this will be a trade, unless the stock hit $81 before $102. Then this will become an investment.

Notes: The debit created from the two options sales drives net basis down to $84.31. The firm will pay a quarterly dividend of $0.80 on December 12 to shareholder of record on November 20. This takes net basis down further, to $83.51.

Outcomes: If the trader does get called away at $100 ahead of the next earnings release, we are talking about a 19.7% profit in 10 weeks. Conversely, if this trader is forced to double down at $81, then once the same debit for the options sales and the dividend payment for the first 100 shares is accounted for, this trader will be long 200 shares at a net basis of $82.26. The trader, at that point, would sell two out-of-the-money calls going into earning two weeks later in order to manipulate that basis even lower, while re-evaluating targets.