By STEPHEN GUILFOYLE Jan 13, 2020 | 12:22 PM EST
Stocks quotes in this article: CVS, WBA
Let's think. That's what this piece is: My thoughts about what to do with my money. Read at your own risk, but go on from here, and I warned you -- you're in my cranium with all of the electric-tape hockey pucks, baseball cards, and spiders that bang around in there. Enjoy.
OK, CVS Health ( CVS) . The name is one of my undervalued, dividend-paying names that I have been supportive of for quite some time. That did not stop me from taking profits in early to mid-November, as I worked my way out of one of my strong 2019 performers. That also was my impetus for getting back in, just a few days ago, as I decided that the shares had come off the highs enough and had shown support. Well, I am down just a smidgen on this, the 2020 version of my CVS long.
Worried?
Not really. I am only about an eighth of the way back in. Dry powder aplenty. Walgreens Boots Alliance ( WBA) disappointed last week. That's going to require some developed thinking. Put your caps on, gang. We're about to step to the plate.
CVS Health reported the firm's third quarter on Nov. 6. The quarter, outside of front-store sales, was generally a good one. Beats were made on earnings performance and revenue generation. Fourth quarter numbers are due on Feb. 12. A key reason for my interest in the name, aside from the "too low" valuation in terms of forward-looking multiples, had been the benefits of the Aetna acquisition and what that meant as this business evolved in a politically difficult environment.
In November, the firm talked about synergies that would provide at least $400 million in cost efficiencies for the full year 2019. CEO Larry Merlo expects to be able to deliver between $1.5 billion and $2 billion in run-rate savings by 2022 as the company moves along with integrating the businesses and turns them into a pharmacy retailer married to the managed-care operation that ultimately improves through the use of big data and analytics and creates efficient performance for the patient.
Let's also keep in mind that CVS had made an obvious effort in 2019 to pay down debt and deleverage the balance sheet, which had been noted as a significant culprit for the below-market valuation. I am not pretending that this is no longer an issue. Both the Current and Quick ratios -- which help show a company's ability to turn assets into cash to pay off obligations -- remain as of Q3 well below what I would consider to be optimal.
For the current quarter, the street looks for earnings per share, or EPS, of roughly $1.68, that will be down from Q4 2018, on sales of about $64 billion. That would be 17% growth.

Declining profit on improved sales was at the headline, the theme taken from the Walgreens Boots report last week. Notably, the firm left full-year targets in place, but did mention increased competition as well as reduced margin in prescription drugs. The gist is that rebates paid by insurers are contracting more rapidly than are the prices that pharmacies pay for generic drugs. Walgreens acknowledged doing less well with Aetna, as Aetna has the built in relationship with parent CVS.
Is this factor a risk to CVS? Probably, on a broad level, but one would think the impact to be less severe had the firm not married up to one of the nation's largest insurers. Then, in addition to a potentially troubled environment regarding rebate guarantees, this is an election year, and there will be at times political pressure placed upon the industry from both sides of the aisle in Washington as the year develops. That's why I am going slow on this.
I am not trying to decide whether to hold onto my current long position; I am trying to decide on where and when to add. Monday and Tuesday are critical days to this name. First off, CEO Larry Merlo is Jim Cramer's guest tonight on " Mad Money." Remember how well he came off last time he appeared on the show? Secondly, Merlo, and Karen Lynch, the executive VP & President of Aetna, are set to speak to investors at the JP Morgan Healthcare Conference in San Francisco. Think the shares wiggle a bit? Not unheard of.
What does Merlo say about the significant $7 full year EPS level for 2019? For 2020? Maybe. I'm just hopeful, but so is the Street. Consensus for the year is up to $7.03 for last year, and $7.14 for this year coming. Though I trade my positions, because, heck, that's who I am, I think of CVS Health more as an investment. 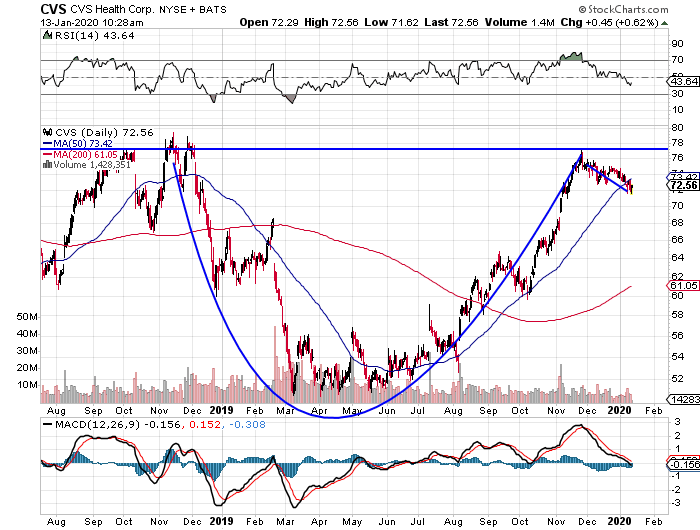 Basically, we are looking at a well-formed, though gigantic, cup with handle pattern. For me, it's now a matter of how deep the handle gets, as that leg is still developing. I do not love that the 50 day simple moving average failed to provide real support, but honestly, take a look at the slope of that 50 day. How could it? It would not surprise me at all if the algos recognize the former resistance of the February 2019 level at $68 to $69 as potential support. I am willing to add down to that level. I become concerned when that spot cracks, because that puts the 200-day SMA (currently $61) in play.
Optimistically, the $77 level would become the pivot. Once taken, and that's a stretch, a subsequent break-out could technically go as high as $92. Not necessarily a target price yet, as first we have to see the handle come to completion. For now, let's hear Larry out. Oh, by the way, I think I go from 1/8 of a position to 1/4 of a position once this piece hits publication. Maybe 3/16. Catch you on the other side, gang.
(CVS is a holding in Jim Cramer's Action Alerts PLUS member club. Want to be alerted before Jim Cramer buys or sells it? Learn more now.)
Get an email alert each time I write an article for Real Money. Click the "+Follow" next to my byline to this article.
TAGS: Health Insurance | Investing | Stocks | Food & Staples Retail | Health Care Equipment & Services | Healthcare | Pharmaceuticals | Retail | Stock of the Day