By STEPHEN GUILFOYLE Dec 09, 2022 | 07:46 AM EST
Stocks quotes in this article: MSFT, ATVI, BRK.A, BRK.B, LULU, ORCL
And my mind kept playing tricks on me
Feeling older every day
Sometimes I'll fall down, sometimes I'll lose hope
But those days will be few if I keep my feet on the ground
I might be lonely, but I ain't alone here
So, I keep pushing the limits of what makes me me
I can be better than I was
I can be better than I am

Way before the dawn, a sole, silent creature rises. Not like the phoenix from the ashes. More like the man in the blackened window. Man versus time. Man versus sloth. Man versus temptation, Man versus self.... and all of the "just as silent" evil known to a mind that won't pipe down. An evil unknown to all.

On the floor. Push up. Down. Push up. Down. The radio. Foreign markets. Equity index futures. First cup of coffee. Back on the floor. Crunches. Begin. One, two, three, four. The voice and cadence of someone unseen, but etched in time rings familiar in a mind now ready to focus. Now. Fear of the dark? Fear of that unseen evil? Woe and weakness shall be theirs. For I am the darkness, and that evil had better learn to fear me. Rock on.

Did you ever think you would hear so much about the Producer Price Index? Consumer-level inflation has always mattered to financial markets. For so many years, producer/wholesale-level inflation would pass unseen, as if inflation at that level was simply a concern for the few. This morning, from a market perspective, the macro just happens to be a big deal, partly because there just has not been a ton of headline data released this week. Oh, and partly because the high-speed, high-freak crowd has decided to game their algorithms accordingly.

On Thursday, another scary-looking weekly jobless claims report hit the tape. Oh, the 230,000 initial claims startled no one. It's the continuing claims number that has economists a bit rattled. At 1.671 million, that number has printed higher than the week prior for eight consecutive weeks and now stands at its highest level since March. Those who claim strength in labor markets by acknowledging only the Bureau of Labor Statistics establishment survey whileintentionally ignoring both the ADP Employment Report and BLS household survey need to follow weekly continuing claims. They need to get their heads out of their tails as well.

For the month of November, the consensus view for PPI is for growth of 5.9% year over year at the core, decelerating from 6.7% in October. At the headline, we are looking for growth of 7.2%, slowing from 8.0%. On a month-over-month basis, expectations are for growth of 0.2% both at the headline and the core. This report will print at 08:30 ET.

At 10 am ET, the University of Michigan will publish its advance survey for December Consumer Sentiment. While the headline number always matters here, it is probably the inflation expectations component that has more potential for an algorithmic impact on price discovery mid-morning.

Keep in mind that whatever happens this day will be somewhat skewed going into the weekend and that the bigger fish will be fried next week as the November Consumer Price Index (CPI) hits the tape on Tuesday and the Federal Open Market Committee (FOMC) is set to do its whole dog-and-pony show, which will include its nearly always inaccurate economic projections on Wednesday.

Thursday. How important was Thursday? Hard to say. Trading volume withered ahead of Friday's data. The S&P 500's losing streak came to an end. That was nice. "They" finally sold some Treasuries. I had no idea that the key spreads that I watch daily and that are so badly inverted actually could go the other way. Most important, I thought on Thursday, was the ability of the Nasdaq Composite to find support at its 50-day simple moving average (SMA)... 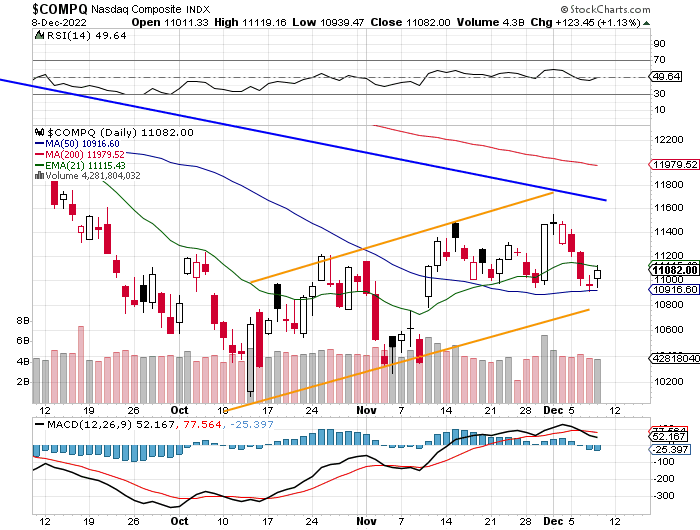 ... though the index did run into trouble at its 21-day exponential moving average (EMA). I also thought it potentially important that the Philadelphia Semiconductor Index, which was up 2.67% for the session, found support at its 21-day EMA after a three-day fistfight and... 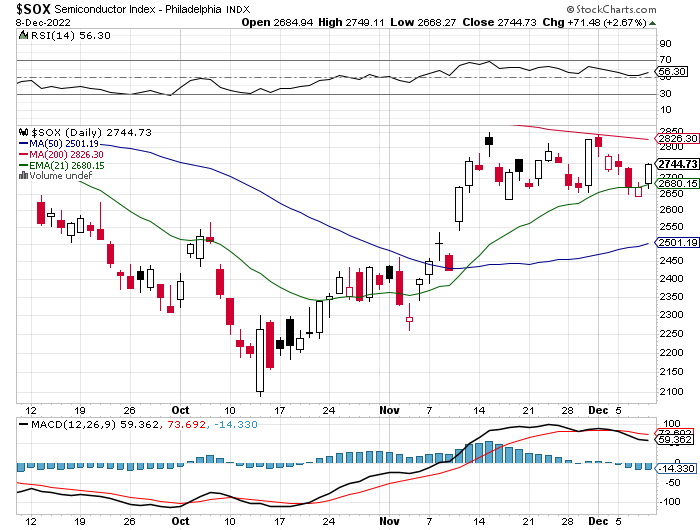 ... was able to move toward possibly making another attempt at a frontal assault on the key 200-day SMA. That is with a daily moving average convergence divergence (MACD) that, while suffering a bearish cross-under earlier this week, still stands with both the 12- and 26-day EMAs deep in positive territory.

Basically, Thursday was akin to a speedy batter bunting for a base hit with two out because the Mighty Casey is up next. Three outs? Two-run dinger? Let you know after the data print.

Anyone else catch that news on Thursday? According to Bloomberg News, job market platform Indeed has built an index that tracks and predicts salaries based on postings for jobs listed on that platform. This index shows that wage growth was up 6.5% year over year in November, down from the peak of 9% in March. Well, this index is predicting a coming slowdown, with job postings in four of the platform's five categories showing lower rates of pay than they were six months back. Researchers putting the report together wrote, "On its current trajectory, posted wage growth would return to its 3%-4% pre-pandemic pace by the second half of 2023."

Well, it was not exactly a surprise. The Federal Trade Commission voted 3 to 1 along political lines to block Microsoft's (MSFT) planned $75 billion acquisition of video game producer Activision Blizzard (ATVI) . The deal is also under the microscope of the UK Competition and Markets Authority as well as the European Commission.

The beef is that Activision is among a handful of video game developers that produce and publish games for several kinds of devices, including consoles, personal computers and mobile phones/tablets. While Activision CEO Bobby Kotick expressed confidence to his staff that the deal ultimately will close, Microsoft President Brad Smith showed some frustration after MSFT had proposed concessions earlier this week, including making key games available to its Sony SONY rival for 10 years post-completion.

This is the deal for traders. An FTC hearing is set for next August. MSFT closed up 1.2% at $247.40 on Thursday, while ATVI dropped 1.5% to $74.76. Should the deal close materially unchanged from how things now stand, said deal values ATVI at about $95 per share. That's a 27% move from last night's close, if it all works. That could come in handy during what likely will be an uncertain year for our markets. An investor who went down that path would be in good company. Warren Buffett's Berkshire Hathaway (BRK.A) , (BRK.B) is one of ATVI's largest stakeholders, at a rough 8% of the company.

Shares of yoga-wear maker Lululemon Athletica (LULU) were roasted overnight as current quarter guidance came up a bit short of consensus despite the company reporting another excellent quarter for the period ended Oct. 30. LULU beat the street on both the top and bottom lines for the third quarter. Comp sales were up 22%, or 25% in constant currency. Gross margin decreased 130 basis points, but operating margin actually increased 120 basis points.

I was trading Lululemon last night. I had wanted to get flat before calling it quits at 8 pm. I got distracted and missed the ARCA close, so you will see a long position in the disclaimer below, but that will not impact my thoughts here. That position is small and did not exist when the bell rang. I am not getting hurt. At least part of the expectation for pressured performance for the current quarter is likely driven by the balance sheet.

Not that the balance sheet is weak, but the composition of said balance sheet is less well-structured, putting future revenue generation and margin at risk. LULU ended the quarter with current assets of $2.634 billion, up small from the end of the January quarter. However, since that time, LULU's cash position has dropped from $1.26 billion to $352.6 million, while the value entered for inventories has increased from $966.5 million to $1.741 billion. Lululemon still runs with a current ratio of 1.99, which is excellent and actually an improvement from 1.86 in January. However, given the composition of those current assets, LULU's quick ratio has dropped from 1.17 to 0.68 over that same time frame.

Lululemon CFO Meghan Frank mentioned that the rate of inventory growth will moderate by the end of the current quarter. The year is certainly not lost. The business is as healthy as ever. Lululemon, like so many others, needs to manage its inventory situation due to the circumstances of the past couple years, which likely leads to a quarter of less-than-hoped-for performance. It's still a great company. No debt on the balance sheet. However, I'd rather trade LULU than invest right now. The stock does trade at 37 times forward earnings. Perhaps the investment comes after I see which way the wind blows as January winds down.