Everyone looks both ways before crossing the road. Goes for folks of all stripes, but even growing up in the City of New York where the majority of streets or avenues travel in just one direction. Why, because you never know. Fact is, on the day that you do see a vehicle traveling the wrong way on a "one way" street (which happens more often than one might think), that vehicle is usually moving at great speed, and quite recklessly. Usually means that vehicle is trying to avoid or escape something they fear more than accidentally running over a few innocent pedestrians.

Early last week, we could not yet make the call that the uptrend for U.S. equities had come to an end. The volume was there, at least in spots. There was certainly some institutional distribution, especially for those more entrenched in "old economy" type sectors, or plainly those slices of our equity market more reliant upon better economic performance.

The numbers posted by the Census Bureau and the Federal Reserve in the U.S. on Friday for both Retail Sales and Industrial Production (month of April) were, of course, simply awful. That said, the numbers that hit the tape were in line with labor market data produced by the very same economy. (Comment: Efforts were made to reduce the seasonal adjustment usually built into the data, as these negative economic pressures are certainly not typical of past Aprils, and let's hope and pray, not seasonal going forward.) The pace of reopening economies safely and effectively is what will control what happens from here.

Stepping back a few feet, we see a negative-looking week. The S&P 500 gave up 2.3%. The small-caps were decimated. Even the mighty Nasdaq Composite surrendered 1.2%. All of this on elevated aggregate weekly trading volume. Moving in for a closer look, however, we also see that all of those indices rallied into the weekend on handsome-looking trading volume. Not just that, these markets bottomed early on Thursday, and maintained, for the most part, the integrity of nearly two-day trend line support into the weekend.

One thing I bet you haven't thought of lately, might be the 3 month/10 year U.S. Treasury yield spread -- you know the one spread that even if the reason for this economic contraction was a true "black swan" event, did once again accurately foretell the contraction.

Well, since the Fed stepped in and made the effort to plug each and every hole as that hole appeared, this spread has nearly flatlined in comparison to recent history, and while this spread has moved sideways, so has the S&P 500. Take a look.

Here is the spread versus it's own 50-day simple moving average. Not much of a difference now. Let's check out this spread versus the S&P 500.

That's some tango these two put together as they have danced across the floor since early April, don't you think? Yes, at least in places where value counts as much as growth, the bond market remains very much in charge. Interesting? At a minimum. Did portfolio managers create some cash last week? Yes. Did some of those same managers then spend some of that cash on the dip that they themselves created? Probably.

Fed Chair Jerome Powell hit the media this weekend. The focus had at first to be on the idea that unemployment in the U.S. could peak at something in the area of 30%, and that full recovery could take as long as until the end of -- not this year, but next year. The Chair did mention a couple of positive add-ons that started to sink in after that.

Without a second wave of the coronavirus, Powell sees a gradual but persistent recovery over the second half of the year. Even better, on CBS last night, Powell said "We've done what we can as we go. But, I will say that we're not out of ammunition by a long shot." In fact, the Chair almost sounded sure that the economy will at some point reach the levels seen prior to the pandemic. He even added that maybe folks should not bet against the U.S. economy.

I know that I won't. Not over the long term, nor relative to peer economies. Sure, the Atlanta Fed's GDPNow model currently shows the second quarter running at -42.8%. Sure, most folks in the U.S., or around the globe for that matter, will not feel nor act "normally" until there is a broadly effective and available vaccine that can ward off Covid-19 related illnesses. Powell said just that.

More than anything else, that is what controls the length of the road traveled to get back. Volatility in financial markets remains, in my opinion, a certainty. Do investors believe in this market? Does the public believe? They almost have to.

That's just it. Policy makers, and vaccines. We already know what the Fed is and can do. We already know that Speaker Pelosi has made the first bid for much more fiscal support. There has not yet been a counter, but a counter is coming (volatility). Wherever fiscal policy ends up, there will be more help across a number of fronts. Drag on growth in the future? Probably. Remember your environment. This is Monday, May 18, 2020. That fight is now for another day.

I know it's hard to fathom for some who can only trust corporate or macroeconomic fundamentals, but this market, while still very frightened, has expressed a level of resilience. Listen to the market. Is price truth? I don't know anymore. I do know that profit is truth, and in order to achieve profit, one must always be willing to adapt to the environment provided. Even this environment. Now, let's get that vaccine, and let's hope the president's "Operation Warp Speed" is a grand success.

On that note, such firms as Moderna (MRNA) , Johnson & Johnson (JNJ) , Pfizer (PFE) , and Sanofi (SNY) are all either in or close to entering into clinical trials involving human beings, and all are taking steps well ahead of any kind of approval to increase the scale of possible production ahead of time, in order to shorten delivery times.

What Could Leave a Mark?

Geopolitical risk. That's what. You all saw the extreme volatility in semiconductor stocks late Sunday night. Taiwan Semiconductor (TSM) , the planet's largest contract chip manufacturer, has halted, according to the Nikkei Asian Review, new orders from Huawei Technologies in response to changes made to U.S. export rules aimed at strategically limiting Huawei's access to these supplies. Guess the $12 billion plant in Arizona is still on.

You also all heard White House Trade adviser/economist Peter Navarro go on the media offensive over the weekend. Navarro stepped up the rhetoric in the war of words between the U.S. and the Chinese government. This comes ahead of the World Health Organization's (WHO) annual summit that will kick-off... surprise... today. By the way, there are a lot of angry nations on this planet right now. Fireworks? Count on it. For some reason, even though Taiwan has, of all of this planet's independent governments, perhaps handled this pandemic best of all, that government remains uninvited to speak at this summit.

--Microsoft (MSFT) will hold the firm's annual "Build" developers conference this Tuesday and Wednesday in a virtual form. There will be some 600 sessions covering many growing technologies plus a keynote address offered by CEO Satya Nadella.

--Macy's (M) holds a fireside chat this Thursday with JP Morgan (JPM) . Where is the firm headed as economies reopen? Is there a change in direction regarding the firm's real estate holdings now that Czech billionaire Daniel Kretinsky holds a stake, and probably a say? By the way, big week for retailers. Walmart (WMT) on Tuesday morning is this week's big fish.

--Nvidia (NVDA) broke out on Friday, ahead of earnings to be released after this Thursday's closing bell. This is a Sarge name, and to be honest, I truly hate when one of my names runs into to earnings. My target price had been $330. As this chart will display, I now have a decision to make this week. Should the move hold. 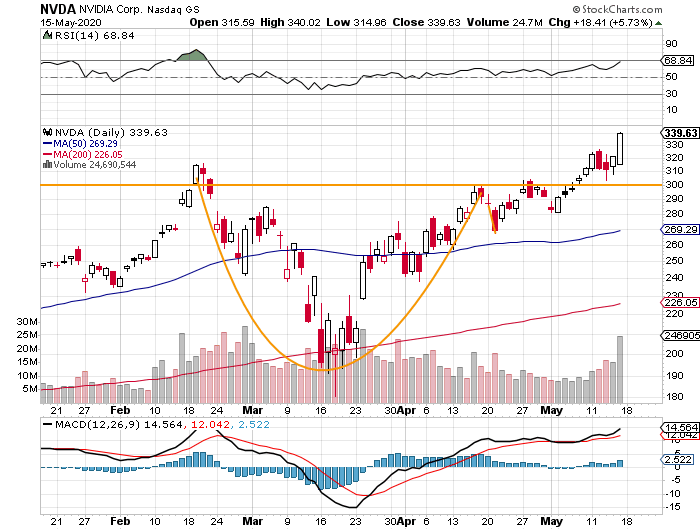 What we now have is a $300 pivot, my old pivot had been $275. On Friday, highly-rated Needham analyst Ravindra Gill increased his price target from $270 to $360. That same day, also very highly rated Ambrish Srivastava of BMO Capital took his target from $285 to $425.

I am not sure yet where my new target is. I will tell you this, technically. If $300 is the pivot, then $360 is conservative. That in no way means that I don't take a little something off of the fastball before Thursday. Just saying. Ringing the register is more important than being right. Know what I mean?

Get an email alert each time I write an article for Real Money. Click the "+Follow" next to my byline to this article.
TAGS: Economy | Investing | Markets | Stocks | Technical Analysis | Trading | U.S. Equity | Coronavirus

Were Deere & Co's Results Strong Enough? Here's How to Trade it

So far, it appears that demand is not an issue.

While the near-term charts and market breadth remain positive and lack sell signals, some clouds are starting to appear.