Which way did he go? I don't know. You guys know?

Over there. Where? Oh, look... a squirrel. Confused? Was creating confusion the intent? These guys know that jacking dollar valuations is deflationary, right? Right? It was Jimmy Breslin who wrote the book "Can't Anybody Here Play This Game?" Well, can or can't they?

Fed Chairman Jerome Powell might as well just shrugged his shoulders and said "because," then dropped the mic and walked off. That might have sent a more cohesive message. He was just that helpful on Wednesday afternoon. It becomes difficult to imagine a press conference coming off that poorly.

The policy moves made were correct for the environment. One 25-basis-point reduction made to the fed funds rate? Check. An immediate halt to the destruction of money supply known as "quantitative tightening?" Check. So far, so good. Seems that the committee has actually started paying attention.

It gets better. From the official statement itself, the phrase "will act as appropriate to sustain the expansion" comes shortly after mentioning "implications of global developments for the economic outlook as well as muted inflation pressures." Clearly.... and I mean clearly... dovish signaling. That makes sense if one is actually making a serious attempt to un-invert the yield curve and make it stick, or defend the U.S. currency from the actions of foreign central bankers. These are strategic goals that not only make sense, but they also justify the moves made quite well. This is where it gets rough.

Not The Great Communicator

Not even close. I have repeatedly indicated my desire for technical corrections to be made to policy. I have stressed that the economy based upon the data did not necessarily require an immediate rate cut, but that credit conditions and exchange rates desperately needed these adjustments. The Fed chairman at the press conference not only indicated that he really has no idea why he eased policy this month, but that there might be no bias for the trajectory of monetary policy going forward.

If there ever was a meeting where policy outcomes moved to ease, while making a dovish official statement followed by a hawkish press conference, this was it.

Incredibly, at one point during the press conference, Powell actually said, "We're thinking of it (policy changes) essentially as a mid-cycle adjustment to policy."

The implication there would be simply an unspoken acknowledgement that the December 2018 rate hike had been one step too far too fast, that this would correct that error, but once absorbed, that cycle might be re-engaged. After a dovish statement. Powell also inferred that this one rate reduction was not the beginning of a lengthy rate-cutting cycle.

I do not condemn uncertainty. Sometimes, people just don't know. I was taught something a long time ago by one of the great floor traders of his era who I was fortunate enough to apprentice under. I was told that when moving large amounts of capital on behalf of the nation's major mutual funds to be decisive, but also make sure I had a reason for what I did.

It was one thing to be wrong. The funds will eat you alive for that anyway. It was a far greater sin to execute large trades without understanding why you took action. "It was the thing to do" is not an explanation for anything. Jerome Powell, it would appear, cannot explain why he took action on Wednesday.

Though at least on the surface the moves made were the ones that I had laid out for the Federal Open Market Committee (FOMC) to take, I feel that if there was this level of uncertainty in what direction the next step taken should be then why even act?

Like I said, the move toward easing was technical, not necessarily required by the current domestic economic condition. There is no cute way to sugarcoat Wednesday's press conference. It does not help the dollar. It will not impact the slope of the yield curve. Through newly manufactured, increased levels of uncertainty investment will slow, as will the activity of purchasing managers.

The Fed needs to tote out a few speakers in order to walk back this mess. Unfortunately, it's August, and this crew does not appear to be a bunch of hard-charging fire-eaters.

Will markets recover? They might. That depends on whether futures traders in Chicago believe Powell simply got crossed up in his communication. If taken at his word, tough question.

Broad U.S. equity indices all gave up more than a percent. Even the small-caps suffered as the Russell 2000 did a U-turn during the Powell press conference.

Understand the significance of that please. In an afternoon where dollar valuations spiked higher and flow of capital moved quickly away from multinational large-caps, that capital did not find a home with a group that is almost entirely not exposed to currency exchange rates.

Oh, one more thing. Thanks to the mishandling of the press conference, trading volumes at both of our nation's major equity exchanges soared. Losers beat winners at the New York Stock Exchange (NYSE) by nearly two to one and by more than 2 to 1 at the Nasdaq market site.

The disparity came close to three to one at both exchanges in terms of down volume versus up volume. Volume associated with the Nasdaq Composite printed at 29% premium to its own 50-day simple moving average (yes, that streak is over.), and at a 49% premium to the 50-day SMA for the S&P 500. Keep in mind that this massive increase in activity was confined to less than 90 minutes.

In other words, they sold the snot out of equities on Wednesday afternoon. All 11 sectors sold off, even the bond proxies. Seven of 11 sectors gave up a full percent or more. Consumer staples, media names, the semis, and software stocks. It was the last day of the month, and taking profits where there was monthly profit was indeed the focus. In addition, the very late afternoon weakness for U.S. equities coupled with strength in Treasuries was impacted and exacerbated by pension fund month-end re-balancing, evidenced by moderately higher prices overnight for equity index futures as well as slightly lower prices (slightly higher yields) for Treasury debt.

Silence of the Lam

Lam Research Corp. (LRCX) went to the tape with the firm's fiscal fourth-quarter performance on Wednesday night down a couple bucks during the equity market selloff. Shares of Lam would give up a few more dollars overnight. The firm reported earnings per share (EPS) of $3.62, a solid beat, on revenue generation of $2.36 billion. That number was not only a miss, but showed a contraction of 24.6% year over year at Lam, which is a holding of Jim Cramer's Action Alerts PLUS charitable trust.

The problem for the semiconductor wafer manufacturers remains a lack of industry capital expenditures. Oversupplied inventories of memory simply damaged pricing for NAND (flash) and DRAM, and those prices are not quite yet back to where they need to be.

These are the perils of a cyclical, commodity-like business. The best one can hope for would be that cheaper chips end up driving demand for business/consumer electronics products. On this, CEO Tim Archer, who seems very competent, by the way, said, "We see year-over-year bit supply growth for both NAND and DRAM continuing to decline, with bit supply growth rates exiting the year well below the long-term demand trend lines." Archer goes on to state an expectation that factors influencing supply and demand are creating a favorable setup for the memory chip business as the year 2020 dawns.

In response to pushing out slightly the expected recovery for the space, Lam guided expectations for fiscal first-quarter EPS lower to a range of $2.80 to $3.20 versus an industry consensus of $3.25. The firm guided revenue toward $2 billion to $2.3 billion; consensus there had been $2.36 billion.

There is good news for shareholders, though. Throughout the quarter, Lam repurchased $1.1 billion of its own shares and runs with a dividend yield of 2.1% ($1.10 per quarter). Lam ended the quarter with a cash position of more than $3.6 billion on the balance sheet, and less than that ($3 billion) left in the current share repurchase authorization. The firm, in theory, could buy back 9.6% of market cap. 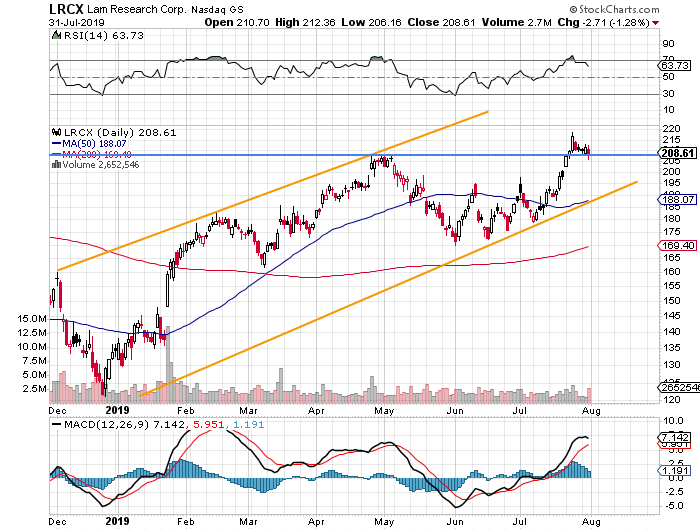 On Wednesday, Lam shares closed below the $209 pivot that I gave you in July. We did get the breakout. However that breakout has failed and the shares will open at a further discount on Thursday. I see Lam shares trading with a $204 handle at this writing.

Optimistically, the shares still run in channel of higher highs supported by higher lows. That makes where these shares find help amid this selloff very important. The CEO himself is telling you that this is a 2020 story. He might be under-promising. That's what I would do. I am short a series of cascading puts that expire on Friday. I'll be free and clear of the name unless I take an equity stake or roll over the premiums from the puts and play that game all over again in three months' time.

Get an email alert each time I write an article for Real Money. Click the "+Follow" next to my byline to this article.
TAGS: Earnings | Federal Reserve | Investing | Stocks | Treasury Bonds | Semiconductors & Semiconductor Equipment | Real Money | Insider Trading